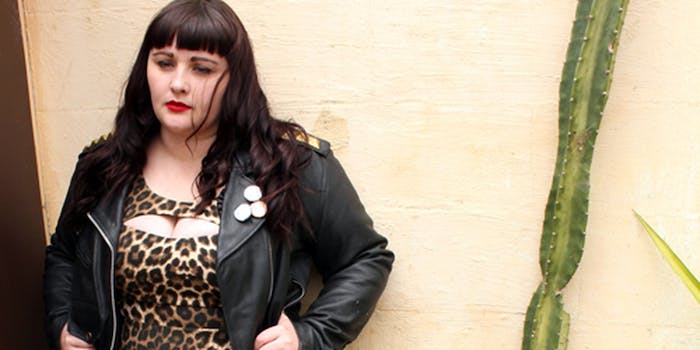 "Men completely ignore and disrespect the context in which you have shared these photos of yourself."

The question of sexual consent is huge for anyone involved in a real-life relationship. But for one blogger from Tumblr’s “fatshion” community, the problems with being a plus-size blogger weren’t just terrible fashion and misunderstanding from outsiders—it was that men from outside her readership kept “sexualizing” her fatshion photos without her consent.

I was really surprised and a bit horrified by this. Before I saw these forums, I saw blogging as a medium that was for women. I only really imagined my readers to be other women who wanted to see cute outfits, I wasn’t trying to attract men and I felt like these men were sexualizing my images without my consent.

Tumblr has long been a source of controversy for the ease of which it makes sharing photos, devoid of any reference to their original context. To Zigmond, the sexualization of the images she shared was invasive and creepy—especially when some of the men from such websites began coming to her blog and leaving “admiring” comments.

Zigmond believes that the fact that men were reblogging the pictures and linking to them so that she would find them was a way of sending her a message that they regard her as an object for their viewing pleasure:

I can’t think of any other fat girl fashion bloggers I know who haven’t experienced at least some level of this, of men completely ignoring and disrespecting the context in which you have shared these photos of yourself, and showing no respect for you as a human being.

Zigmond states that while she ceased blogging for a time because of the intruders, she now only posts things she things won’t interest viewers who come searching her blog for potentially sexual content.

I started blogging because I wanted to inspire women and now the thing I think about the most when posting outfit photos is “How likely are these photos to turn on some creepy guy and make him desire to tell me about it?”

As technology advances, it becomes harder for individuals to control how their photographs are spread across the Internet—or what they’re used for.

But on Zigmond’s blog, at least, there will be fewer photos to share.