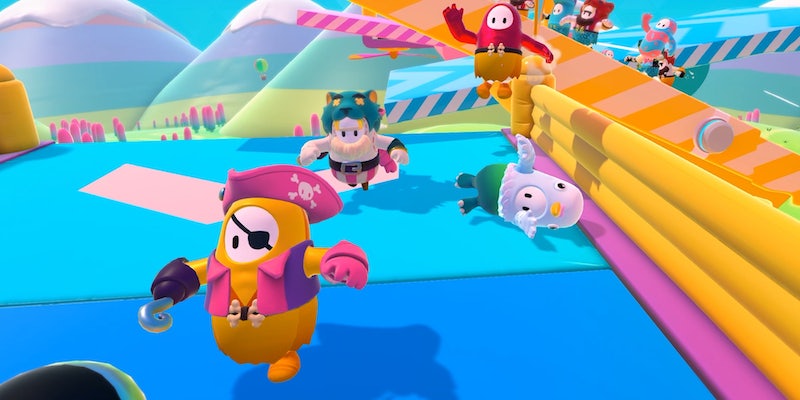 What playing Fall Guys with a sex toy means for sex, tech, and consent in games

The stream showed me using my We-Vibe Wish (the same toy I used for my Zoom porn shoot) while playing through several rounds of Fall Guys. In the stream, I redirected my DualShock controller’s rumble effects straight to my We-Vibe, so every time I jumped, fell, or ran into an obstacle, I got a nice little jolt that vibrated against my skin. Half of the stream involved me giggling and squirming, and the other half involved me fixing all of the Wish’s technical difficulties, of which there were many. But frustrations aside, it worked, and I streamed it, and I had a very fun time. (You can watch a short clip of my first round on ManyVids, although it’s obviously NSFW.)

All of this isn’t supported by Fall Guys nor We-Vibe right out of the box, however. Thanks to Kyle “qDot” Machulis’ open-source Buttplug.io programming library and his Intiface Game Haptics Router, I was able to redirect the controller rumble feature to my We-Vibe as I played. Fall Guys developer Mediatonic and publisher Devolver Digital probably weren’t expecting sex to be added to their bean-based multiplayer jump-’em’-up, but here we are.

There are, to be clear, an enormous number of ethical issues around inserting sex toys into your multiplayer games. During the stream, I didn’t really think much about why I wanted to keep colliding against other contestants or grabbing them (let alone being grabbed). Then, it dawned on me that I was engaging other players in an interaction that they hadn’t actually been fully informed about. That’s the in-game equivalent of hugging as many people as possible so you can feel your butt plug wiggle inside of you, which is not a great thing to do in public.

“There’s no private lobbies or single player. It’s all public, all randos, all the time, and they can trigger haptics via holding or collisions,” Machulis wrote. “It is different than, say, wandering into a game with voice chat and putting your mic right next to the toy that’s reacting haptically to events from others. But it’s still, in the general sense, not a super clear cut great thing to be doing.”

In Video Games Have Always Been Queer, Bonnie Ruberg defines eroticism as a sensual, aesthetic appreciation that comes from the oscillation of shared intimacy between yourself and another. Fall Guys’ tense elimination matches are nothing more than the oscillation “between near and far,” between “control and relinquishing,” between “being giver and receiver,” complete with delays that build to release, to paraphrase Ruberg’s inspiration Laura Marks.

Suddenly, many, many games take on this “erotic energy” too. In Doom Eternal, it’s the ero guro-esque glory kills. In Jackbox Party Pack 6’s “Push the Button,” it’s the titillating thrill of being a hunted Other. Buttplug.io’s previous viral demo, Animal Crossing, is perhaps the best example to date. A significant portion of the game is about the joy of being known, of being part of a community, of being one with a safe world where empathy comes first. Players engage in this eroticism by being social creatures and actively seeking out friendship with their fellow villagers. Many of the game’s characters receive suggestive artwork as a result, especially from queer furries and independent, female-friendly smut illustrators. That’s because Animal Crossing is fundamentally about connection between people—or people-like animals (marry me, Freya). And when intimacy emerges, eroticism soon follows.

One of my favorite Valorant characters, Reyna, is a high femme supernatural chicana military agent who consumes the souls of her opponents. She is as drop-dead gorgeous as her voice lines are dripping with desire: She talks endlessly about how hungry she is, how her otherworldly cravings linger, how she wants more, more, more than she can ever have. This isn’t just a reflection of her gameplay role—she’s an entry fragger that only stays alive by killing as many opponents as possible—but the impetus for a deeply intimate experience playing as her or alongside her (let alone against her). My We-Vibe Wish doesn’t rumble when I play as Reyna, but when I hear her voice lines in-game, my thighs quiver just like when I played Fall Guys. Her dominant, monstrous presence is irresistible to a lesbian such as myself, and there’s a lengthy history of sapphic yearning over monstrous women to back up the point.