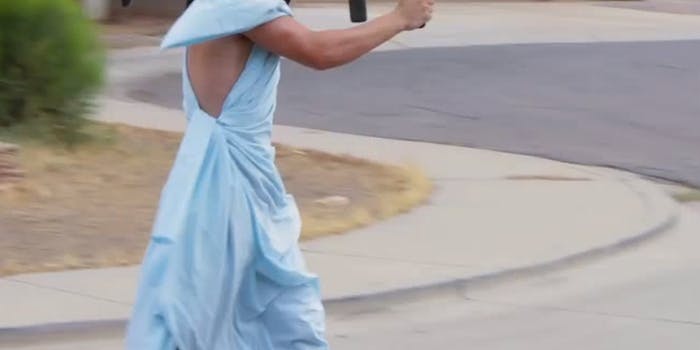 The man dressed his nephew up in a turban and filmed him walking around Phoenix, Ariz. with a fake rocket launcher. The entire incident was captured in a YouTube video.

An Arizona man has been arrested for dressing his nephew up as a terrorist, handing him a fake grenade launcher, and filming the entire episode in an effort to expose flaws in local law enforcement response time. Police were able to locate the man after finding the video on YouTube.

Michael D. Turley, 39, was arrested Monday for his involvement in a YouTube video titled “Dark Knight Shooting Response, Rocket Launcher Police Test,” a four minute video that details Turley’s concerns regarding the Phoenix Police Department’s ability to respond to a terroristic threat by having his nephew pose as a terrorist.

In the clip, the nephew (who remains anonymous because he is a minor) wears a turban and blue sheet and walks around the streets of Phoenix, Ariz., pointing a fake grenade launcher at cars and pedestrians.

Those exploits continue for nearly 15 minutes until an officer pulls up to the scene and tells the nephew to release the grenade launcher and put his hands up.

The two were detained for 10 minutes before being released after explaining to the officer that they were simply filming a movie.

Veiled in shadows and speaking through a voice manipulator, Turley says at the beginning of the video that he wanted to test police after reading about the July 20 events in Aurora, Colo., when 24-year-old James Holmes opened fire during a midnight screening of The Dark Knight Rises, killing 12.

Oddly enough, it was another James Holmes—this time Phoenix police officer James Holmes—who aided in Turley’s arrest shortly after police discovered the short film on YouTube this weekend. Holmes told the Arizona Daily News that he was “surprised” Turley “actually put the video on YouTube.”

Turley, who identifies as an independent filmmaker, was taken into custody on Monday and released after posting a $5,000 bond. He was charged with creating a false impression of a terrorist act, endangerment, contributing to the delinquency of a minor, and misconduct involving simulated explosives.