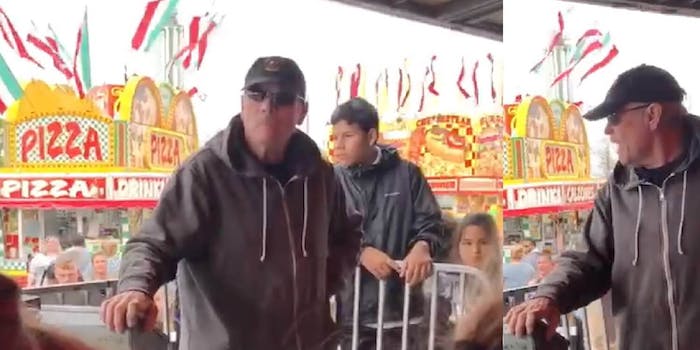 Fair worker gets beat up, fired after calling customer the N-word

A video of the incident has gone viral.

A fair worker in Florida has been fired after he called a Black fair-goer the N-word.

Trevor Reiland shared a video of the incident to his Facebook on Sunday, where it racked up more than 40,000 views.

“Can’t even enjoy the fair these days,” Reiland wrote in the caption of the video. “Guy drags the operator off the ride, after being called the N word.”

The incident occurred at the Lee County Fair in North Fort Myers, according to NBC.

Reiland claimed the operator called the man’s wife “a b*tch” and the man the “N-word” about four times, according to NBC. Others, who commented on the video, claimed the operator wouldn’t allow the couple’s children on the ride, despite the ride having available seating.

The video, which less is than a minute long, shows part of the heated exchange between the ride operator and the guest.

In the video, the operator calls the man a “stupid motherfucker.” An argument then ensues for a few minutes, leading children on the ride to cry.

“Fuck you, you stupid N-word b*tch,” the operator says.

The guest then jumps up on the platform, where the operator is standing–though the two are separated by a railing– and grabs the worker by the back of his hoodie.

“Everybody leave,” the operator then orders.

People on Facebook expressed their anger toward the operator. “He deserved to get pulled up the rail and get his ass whooped. Better watch your mouth next time, boomer,” wrote one user.

On Tuesday, Reithoffer Shows said in a Facebook statement that it has terminated the employee.

“Regardless of the provocation, there is no excuse or tolerance for discriminatory or offensive actions directed to a patron, guest or anybody else for that matter,” a part of the statement read.