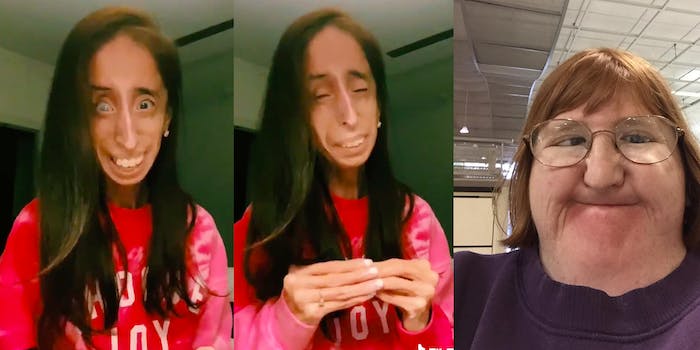 People are using images of people with disabilities to 'scare' their loved ones.

Disability activists are speaking out against a trend on TikTok in which people are using pictures of people with disabilities to “scare” their children, parents, or friends.

Lizzie Velásquez, a motivational speaker and advocate for people with disabilities, pleaded with TikTokers to show more compassion.

Velásquez, who was born with a genetic disorder called marfanoid-progeroid-lipodystrophy syndrome, posted a video on TikTok and Twitter urging her followers to not participate in the trend, pointing out just how harmful it is to the disabled community.

In her video, she shares an example of the trend, in which a mom introduces her son to his “teacher” via a fake FaceTime call. Only, the mom doesn’t use a photo of his teacher for the “call” but a photo of Velásquez. The mom records her son’s scared reaction for a TikTok video.

“I need your help,” Lizzie says in the video, which has amassed over 12 million views on Twitter. She goes on to explain the trend and say that it “is not funny” and “not a joke.”

She says adults should be leading by example.

“If you are an adult, who has a young human in your life, please do not teach them that being scared of someone who doesn’t look like them is OK,” she says. “Everything that these kids need to know about having empathy and being kind to one another starts at home.”

Velásquez wasn’t the only person to speak out against the harmful trend. Writer and disability activist Melissa Blake also expressed her discontent with it on Twitter. (Blake has previously contributed to the Daily Dot.)

“There’s a new viral trend going around in which people are using photos of disabled people to prank and scare others,” Blake wrote in a tweet. “Someone used my photo for this and I’m disgusted. We live in a society where people who look ‘different’ are seen as ugly and grotesque and this is not OK.”