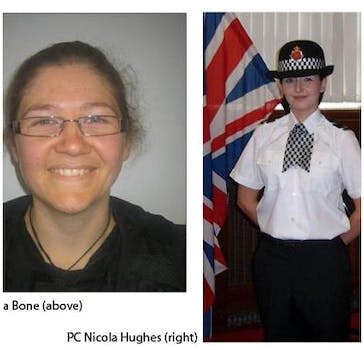 A British man was arrested for allegedly creating Facebook pages in tribute to a man suspected of murdering two unarmed police officers.

Greater Manchester Police said Thursday they arrested a 22-year-old Liverpool man who has a connection with Facebook pages that praised Dale Cregan, a man police have in custody on suspicion of killing two young policewomen in a brutal attack.

The Facebook pages labeled Cregan as a “legend” while some users on the page called him as “Sir Dale.” Another page, called “Sir Dale Cregan is a Hero and a Legend,” also appeared on the social networking site. Comments on those pages referred to the fallen cops as “scumbags.”

A statement released by the police department called the comments “malicious” and “upsetting,” adding that it took the comments very seriously. A Facebook spokesperson told the Daily Mail that the pages have been pulled as they violated the service’s rules.

The unidentified man was arrested under the Communications Act of 2003 which makes it an offense to post “grossly offensive” comments on a public website.

However, online support for the police officers and department has been overwhelmingly positive. A picture of the police officers posted by the Greater Manchester Police has garnered 117,000 likes and 22,000 comments with people posting their remembrances.