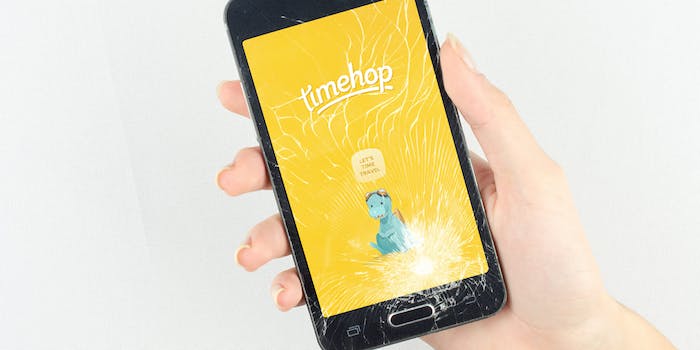 It's OK to practice self-care.

On most days, memory-sharing apps like Timehop and Facebook‘s “On This Day” feature can be pretty fun. These platforms take you back into a “digital vault,” where you can look through cute social media interactions and vacation photos that you were part of on that particular day however many years ago.

On most days, you’ll enjoy looking through a random, nonsensical tweetstorm, or photos you were tagged in from your relative’s celebration, or reading whatever life-changing announcement you posted on Facebook.

But Nov. 8, 2017, one year after President Donald Trump was made president-elect of the United States, is not most days.

If you would much prefer to forgo looking at, or receiving reminders from, these apps to avoid feeling re-traumatized by the election’s anniversary, there are workarounds you can use.

For the “On This Day” feature on Facebook, Sarah Kendall, a very kind person, has pointed out that you can manually set dates that you’d like the feature to not pull “memories” from. For the record, you’ll have to visit the feature first, but then you can find the settings under the gear button on the right of the page. (You can also submit people you don’t want to see memories from—no, I was not able to enter Trump into that field)

quick mental health action for yall. (This setting is found in the "on this day" page, under its settings.)*Edit*…

Timehop gives you less mobility when it comes to blocking posts, but you can select which social media platforms the app pulls from. Once you open the app, drag the settings menu down from the top, and tap “disconnect” on whichever platforms you’ll want to avoid in the next few days. Keep in mind you’ll have to reconnect these accounts when you want to see them again.

Timehop does allow you to also turn off Twitter replies, in the case you want to keep looking through your tweets but don’t want to relive arguing with random eggs on election night. Just tap “Disconnect” for Twitter on the settings page, and tap “Hide replies.” You can turn off notifications for Timehop completely on the settings page, too.

Your iPhone photos also allow you to search for photos from “one year ago” under “Memories,” but it doesn’t notify you about what photos you have waiting for you that day. So, you know, enter at your own risk.

Let me take a moment to be clear—there is never not a moment in time when, individually or as a collective, the U.S. isn’t reminded that Trump is our president. Trust me, how so many of us would love to have the privilege to ignore his bullying, divisive arguments, and child-like behavior. Not to mention his policies targeting entire populations of the country, populations who have no choice but to face those policies.

No one is in “denial” of who the president is. But the evening of the 2016 election—and the days, weeks, months, year that followed—were really difficult for so many people to go through: The moms and daughters thinking they would get to watch the first female president get elected together. The older women who had waited their whole lives for this symbolic step toward equality. The families struggling with the reality that, in the next four to eight years, they might get pulled apart by restrictive immigration policies and the promise of an intercontinental border wall. The transgender students who had no idea what would happen to their protections under a vice president who believed in the power of gay “conversion therapy.”

Settling into this reality was painful for many, to say the least. People were disheartened to realize that friends and family members may not be as accepting as they once thought. People didn’t just complain on Facebook, of course—they flooded streets across the U.S. to show that, no, we are not OK with a man who calls all Mexicans rapists and grabs women by the pussy. We will resist his policies.

But we all need a break. So if you would rather choose to take care of your mental health than be reminded of how miserable and hopeless you felt one year ago, then all the more power to you. By all means, go ahead and hit “disconnect.”