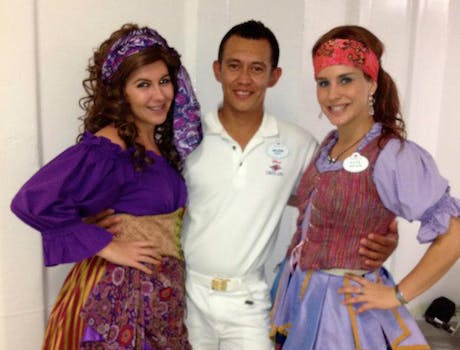 After having her phone jacked on a Disney cruise, Katy McCaffrey used the iCloud feature to shame the alleged thief with his own photos.

It’s an irony unique to the digital age: A woman has created a photo album on Facebook that she says depicts the cruise photos of a man who stole her phone.

According to Katy McCaffrey, her phone went mysteriously missing on a Disney Wonder cruise. Fortunately for her, she’d set up iCloud, which automatically stores photos taken with the phone’s camera online. So when the person who ended up with her phone started taking pictures, she was able to gather them in one convenient Facebook photo album, which she called Stolen iPhone Adventures.

The photos show a jovial cruise worker, whom she calls Nelson from his name tag. Nelson mostly takes unimaginative pictures of the people around him—both coworkers and a woman McCaffrey infers is Nelson’s girlfriend.

Fortunately, McCaffrey provides snarky commentary for each photo. “Here’s a bird Nelson needed a photo of,” she wrote a picture of an ugly parrot statue.

After noting the alleged girlfriend looks upset, McCaffrey points to a photo of Nelson with two women in wench costumes. “Maybe she saw him pose with these two pirate hookers,” McCaffrey noted.

“I have alerted the officials of the Disney Cruiseline and forwarded them the photos,” McCaffrey wrote in the comments Monday. “Hopefully I’ll get my phone back and maybe some free passes to Disneyland.”

In the meantime, she noted, she’s happy to have people go through their album and enjoy Nelson’s amateur photography.