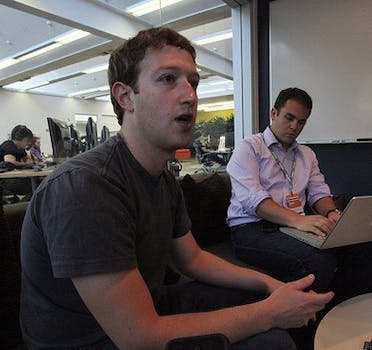 Facebook will help users sign up to become organ donors and denote it on their Timeline, a social initiative the company hopes will help "solve the crisis that's out there."

Facebook has announced a new tool that it promises will help save lives. The site is letting community members state on their Timeline whether they wish to be organ donors.

In a high-profile and slightly uncharacteristic move for the company, Facebook cofounder and CEO Mark Zuckerberg announced the feature on Good Morning America Tuesday morning.

Community members can denote whether they are organ donors on their Timeline and About section, and can elaborate with various details there as well. If you’re not already registered to become a donor, you’ll be presented with a link to the donor registry for your state or country in case you want to sign up.

The organ donor option appears under the Health and Wellbeing section of the Life Event menu. You can choose who can see your organ donor status through the privacy options. The option to identify yourself as a donor is now available to Facebook users in the U.S. and the U.K.

“What we hope will happen is that by just having this simple tool, we think that people can really help spread awareness of organ donation and that they want to participate in this to their friends,” Zuckerberg told GMA. “That can be a big part of helping solve the crisis that’s out there.”

While most Americans support organ donation, only about 40 percent of the adult population have registered as donors. There are more than 114,000 Americans on the waiting list for kidneys, livers, hearts, and other vital organs. However, a little more than 28,000 transplants were performed in the country last year and around 18 people die every day while waiting for one.

The hope behind Facebook’s new feature is that it will bring a social angle to organ donation and encourage people to think about making the decision to register. Sharing their choice to become a donor with others may encourage more people to sign up.

Zuckerberg was inspired to add the feature following dinner conversations with his girlfriend Priscilla Chan.

“She’s in medical school now,” Zuckerberg told GMA. “She’s going to be a pediatrician, so our dinner conversations are often about Facebook and the kids that she’s meeting.”

He said Chan often told him stories of kids “getting sicker as they don’t have the organ that they need,” while also recounting tales of kids being given a second chance at life following a successful transplant.

Zuckerberg added that the death of Apple cofounder Steve Jobs, a friend of his, was in the minds of many of those involved in the project:

“That definitely, I think, was something that we all had in mind as we were building this out. … His story is just one of many, of people who both were able to have an organ transplant that made his life longer and he was extremely thankful for that.”

Facebook’s new tool was also inspired by Dr. Andrew Cameron of Johns Hopkins Hospital in Baltimore. The transplant surgeon and Harvard graduate wrote about the organ shortage in his Harvard Reunion Class alumnus report. One of those who read his entry was college friend, Facebook COO Sheryl Sandberg.

“Well, fast forward to just under a year ago, at our 20th reunion, Sheryl was now COO at Facebook, and with this really powerful communication tool in hand, we crossed paths again,” Cameron told ABC News. “She said, ‘I remember what you wrote last time and I think Facebook can help with the problem of organ donation.’”

Sandberg will make an appearance on World News with Diane Sawyer Tuesday evening, where she will identify some of the personal stories from the Facebook community that led to the launch of this new initiative.

Facebook has established a number of socially conscious initiatives in recent years. It has procedures to help users report cyberbullying, along with a Safety Center to provide anyone with the help they might need.

In December, Facebook teamed up with the National Suicide Prevention Lifeline to make it easier for community members to have chat sessions with suicide prevention workers if they need to. Last week, Facebook unveiled the Safety Dashboard, a way to track any reports of abuse you may have made as they move through the moderation process.