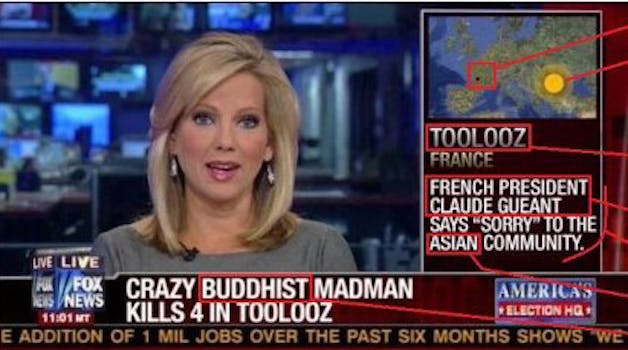 Sorry, Facebook. This screengrab of Fox News is a fake.

Facebook users are speaking out against the quality of reporting on Fox News.

They’re sharing a photo of anchor Shannon Bream in the studio, surrounded by a mess of errors.

A helpful photoshopper points out Fox’s many mistakes: misspelling the French town of Toulouse as “Tooloose,” sensationally headlining a story “Crazy Buddhist Madmen Kills 4,” and misidentifying the French president and quoting him as inexplicably saying “‘Sorry’ to the Asian community.”

The biggest error, though, went unreported: That image never aired.

Ironically, the original photo was from when Fox News really was guilty of an error, though a much more forgivable one. It showed what the network purported was Sarah Palin, but by mistake ran a picture of actress Tina Fey impersonating the former Alaskan governor. Fox apologized for the gaffe.

That news apparently hasn’t reached most of the 19,000 Facebook users who have since shared the photo, though.

“Not that proof has ever slowed down FAUX before,” wrote Lyta Sigmen.