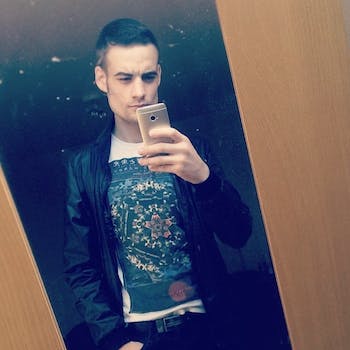 Ste Walker suffers from Crohn's disease and he finally reached his breaking point.

Ste Walker wants people to know that just because he looks “normal” and talks “normal,” it doesn’t mean that he’s not fighting for his life every day. The U.K. man suffers from Crohn’s disease and he recently took to Facebook to explain to the doubters just how serious his illness is.

Walker, 25, actually suffers from all five types of Crohn’s, which he told the Daily Dot via email is extremely rare: He’s the only known case in the U.K., and one of just 40 cases in the world.

According to the Crohn’s and Colitis Foundation of America website, “Crohn’s disease is a chronic inflammatory condition of the gastrointestinal tract.” Crohn’s most commonly affects the end of the small bowel, the beginning of the colon, “but it may affect any part of the gastrointestinal (GI) tract, from the mouth to the anus.” In other words, it impacts basically your entire body.

Walker provided a detailed explanation to the Daily Dot of what exactly he’s currently going through:

I have gastroparesis, I have a blocked artery on my liver, I have mild kidney failure in both kidneys, I have osteoarthritis due to prolonged hydrocortisone use (steroids) my heart is enlarged and inflamed and it’s got a blocked valve, I have hyper-tachycardia and low blood pressure, my immune system doesn’t work at all so I catch any thing and everything. All my meds are iv as I don’t absorb anything at all, take ketamine 20 times a day for pain, I’m on a pcas morphine pump, alfentanel syringe driver for pain, cyclozine and domperidone for sickness, lanzoperozole, mertazapine, amitriptaline, certralopram, ranitodine, bupernorphine, Oxycontin prochloperazine, hydrocortizone, iron infusions blood transfusion every 6week and I’m on vedoluzimab and azothioprine to try treat my crohns but they not working….I’m really struggling at the minute

After six months of intense suffering, Walker was diagnosed with his condition in 2012. Since then, he’s had 77 minor operations, and three life-saving surgeries. In the past 18 months, he’s spent all but four weeks in the hospital in Yorkshire making sure that he’s kept stable. And he hasn’t had solid food or drink in two years. He get his nutrition via a feeding tube.

Despite the enormous physical toll it has taken, Walker is not shy about the ways that his disease has ravaged his body. He often shares photos of his stomach with the hashtag #GetYourBellyOut, a tag meant to create awareness about Crohn’s disease and colitis. 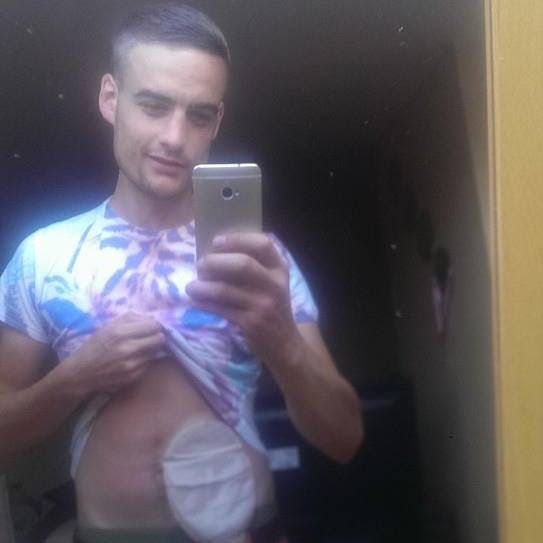 “I did the post just as a rant,” he said. “I am sick of people saying me ‘you don’t look poorly’ or ‘Crohn’s isn’t that bad,’ etc. I bumped into someone I know down at the hospital shop and he said ‘what are you still doing here, you look totally fine.’ And that just made me blow my top because I’d kept it all bottled inside, so I had a rant on FB [Facebook].”

The main objective was not to justify his illness, Walker said, but to create visibility for a disease that is not as mainstream as some others. He told the Daily Dot:

“I think the world needed to see it and the world needed to be taught, that I am a person, I have feelings and they don’t know the struggles I go through just to get myself out of bed and dressed fine and out of the front door, the amounts of painkillers I’ve had to take just so I can move about, or the meals I cook for my family then sit and watch them eat them while I am not able to.”

He continued: “Invisible illnesses need more awareness because there isn’t enough knowledge out there about them. Everyone knows cancer, but not everyone knows Crohn’s, yet it’s just as bad, it takes lives and it is in curable.”

Despite Walker’s suffering, the Facebook post was not in vain. In the wake of all the attention, a GoFundMe has been set up to help him pay for his many medical expenses. “The support I have received is amazing,” she said. “I really didn’t expect it to go viral, and the amount of well wishers I’ve had from all over the world is amazing as it’s down to them that I keep going, that I keep surviving another year.”

And this coming year promises to be an exciting one: he’s expecting his first child with his girlfriend, Ann Rowlands, who he met during one of his many hospital visits.