1:20pm. At the train station, we meet our first fans: Baldwin, Pat, and Gio, a feral-looking freelance journalist who covers Exxxotica every year for his website. He says it hasn’t changed much since its inception: “There’s fewer companies setting up booths, maybe, ‘cause it’s so expensive,” he says. 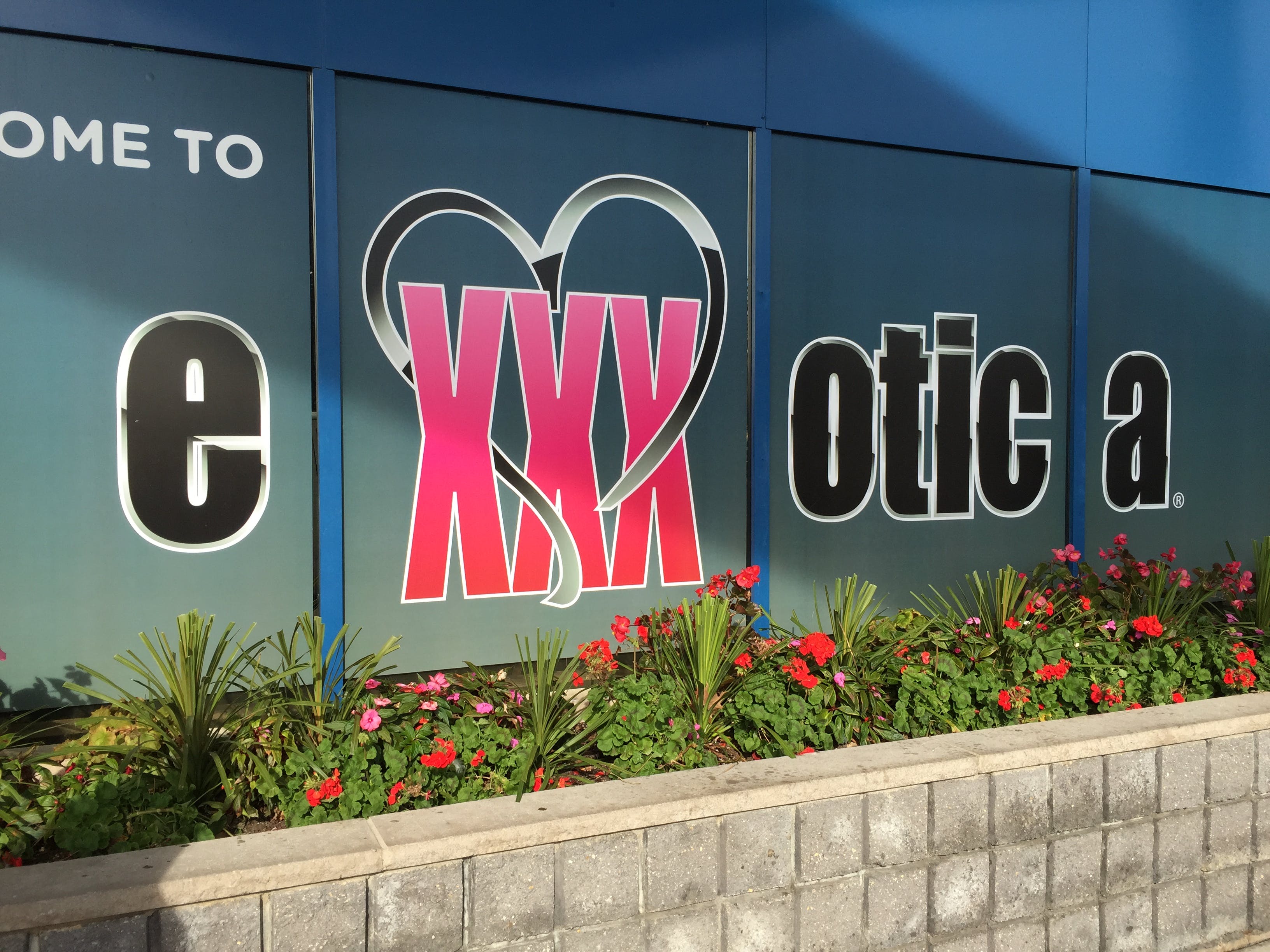 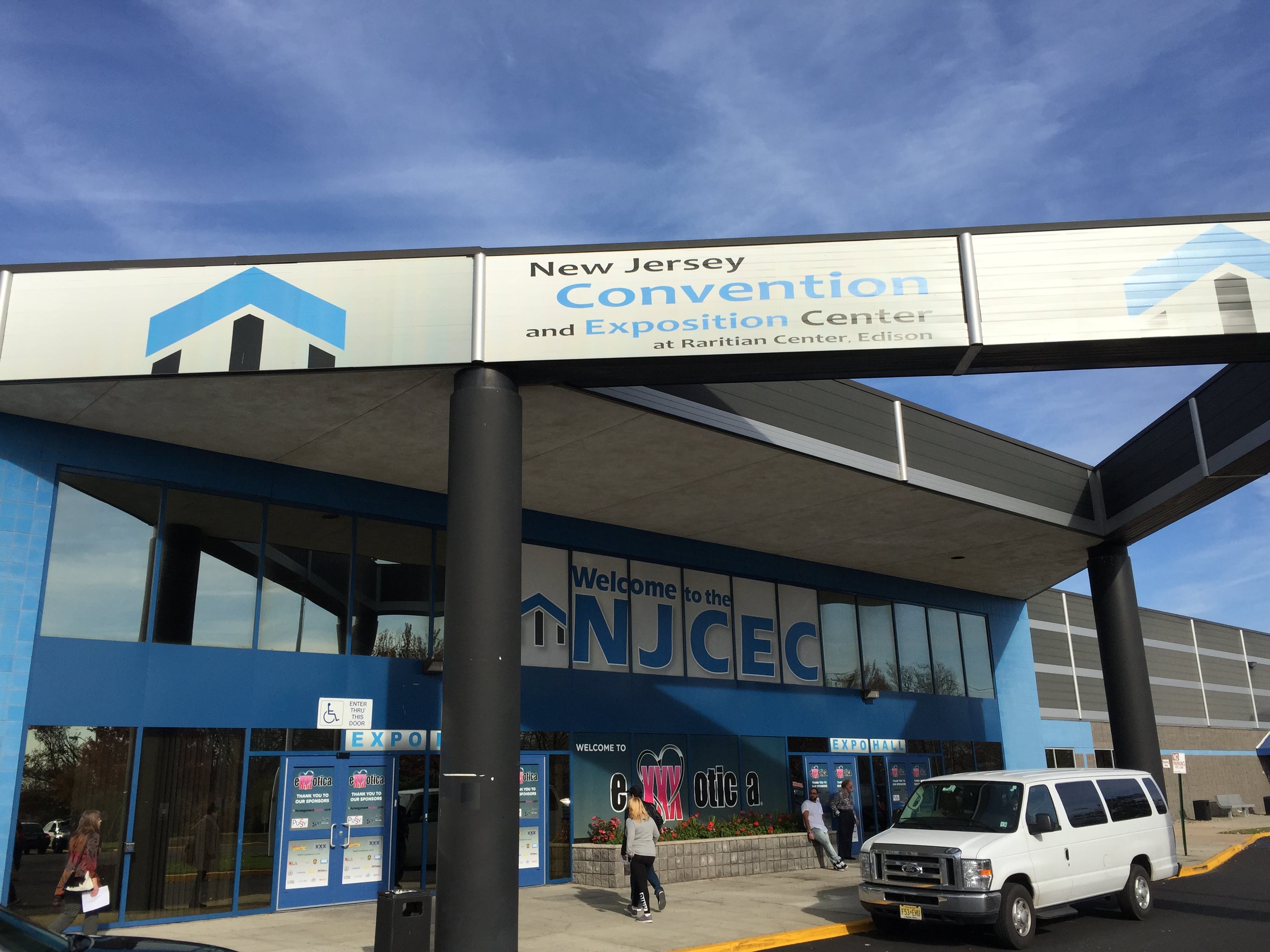 After obtaining our press badges, we enter the enormous room and are immediately greeted by two bored young women in lingerie lounging on a giant bed with a giant teddy bear. One of them says she is a go-go dancer who is studying actuarial science at Temple University. “Like Ben Stiller’s character in Duplex,” I offer. She nods politely. 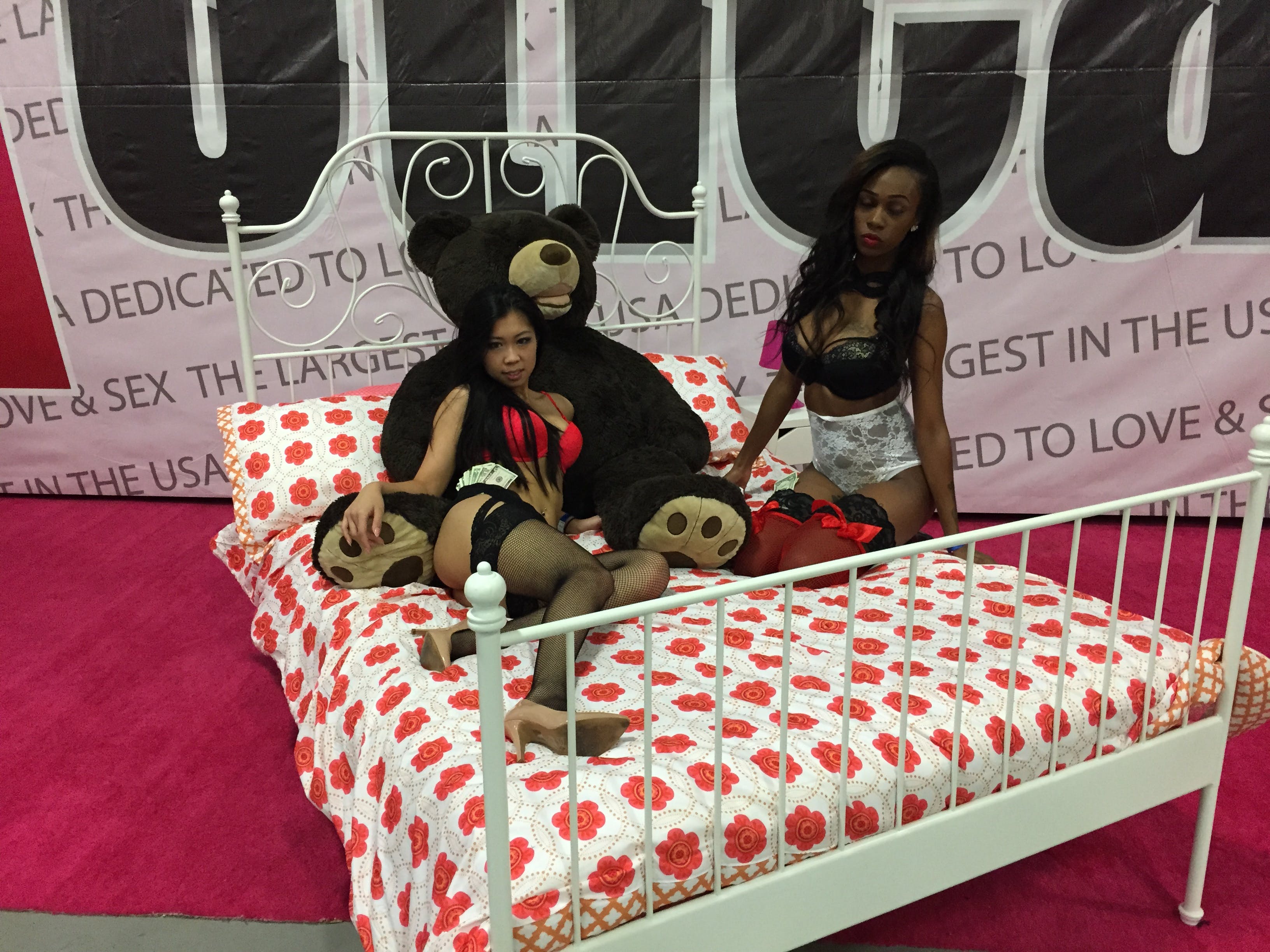 Later, I look up Ben Stiller on IMDB and realize he actually played an actuary in Along Came Polly. The moral of the story: I am a terrible journalist, and Temple should give their actuarial science students more money. 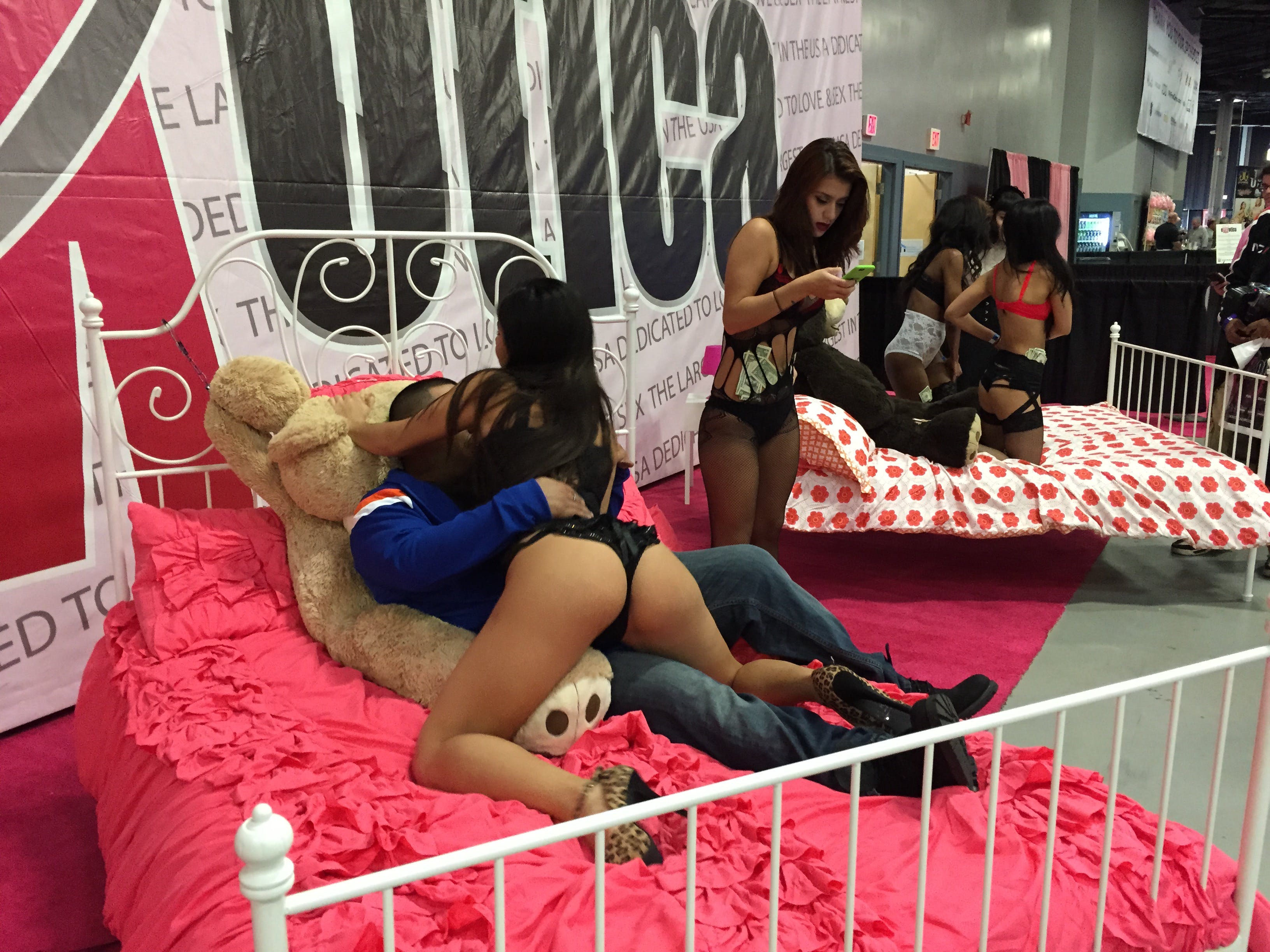 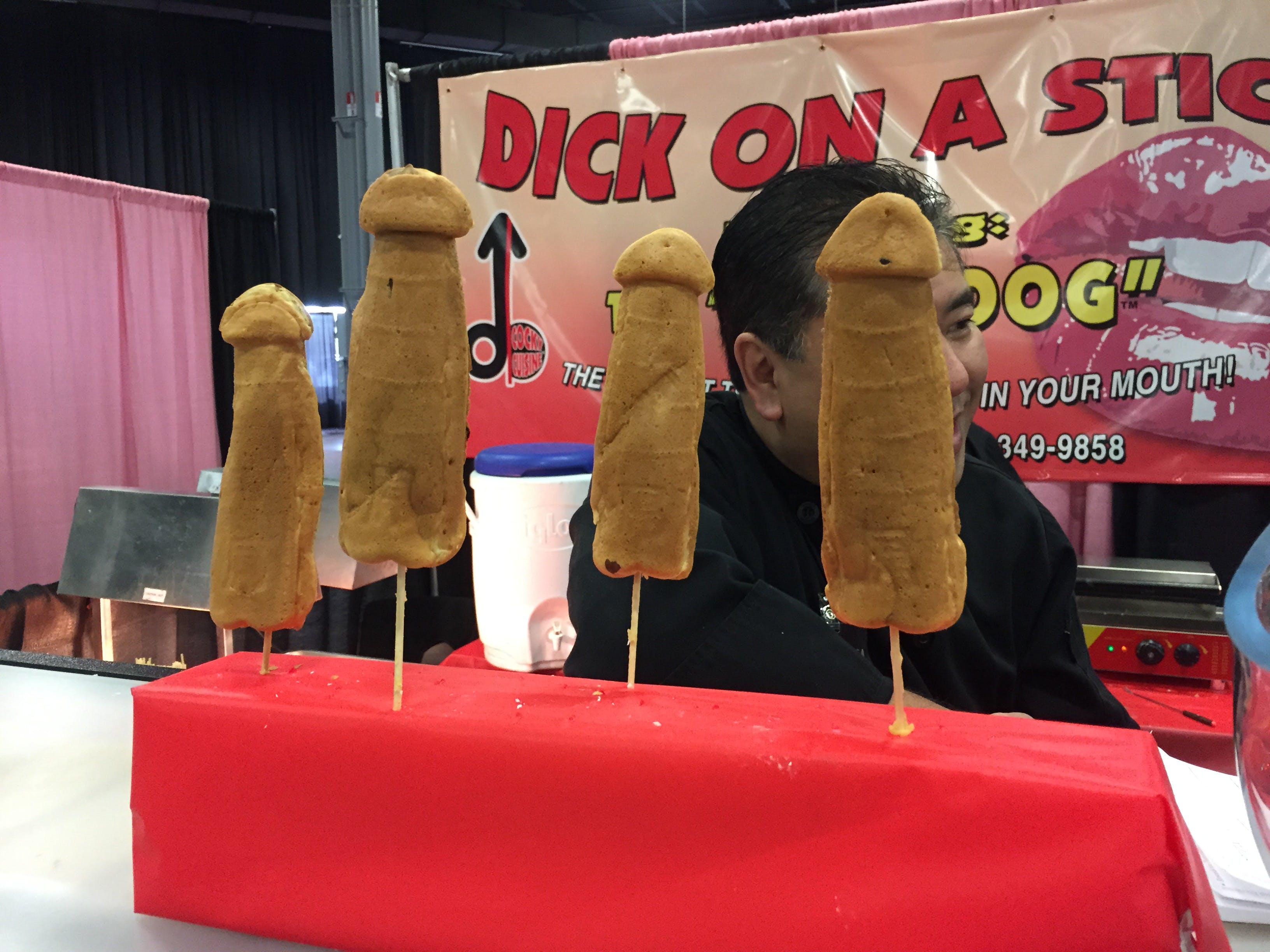 “That sounds pretty labor-intensive,” I say.

Pussy Juice Lube’s owner, a man who introduces himself as Sydney, says there’s no difference between the various fluids. But he’s very excited about the branding possibilities for his product. “You can package and sell your own bottle and you can sell it like Mary Kay, like those women who go door-to-door selling makeup,” he explains. 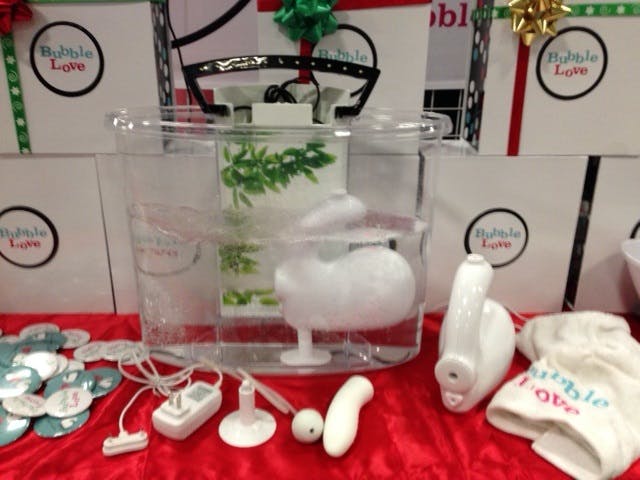 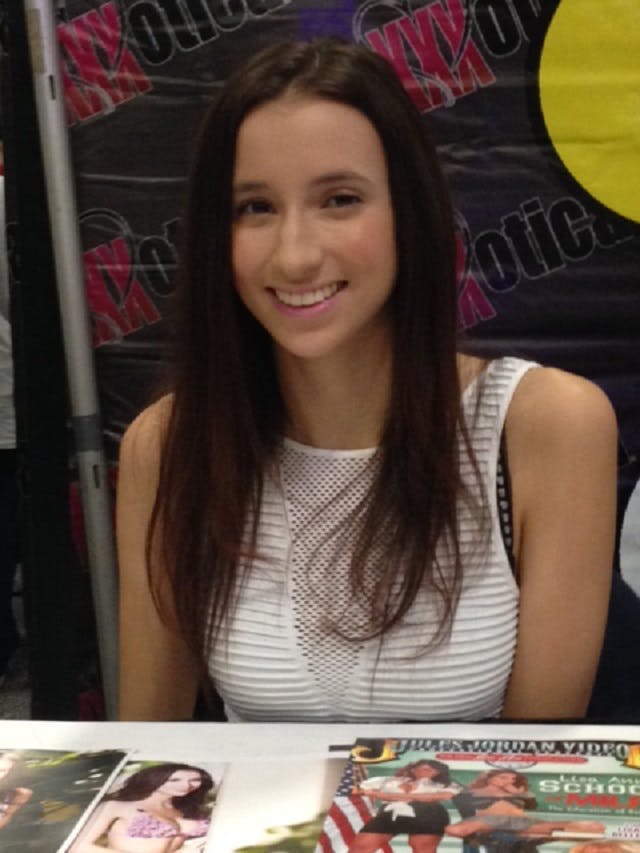 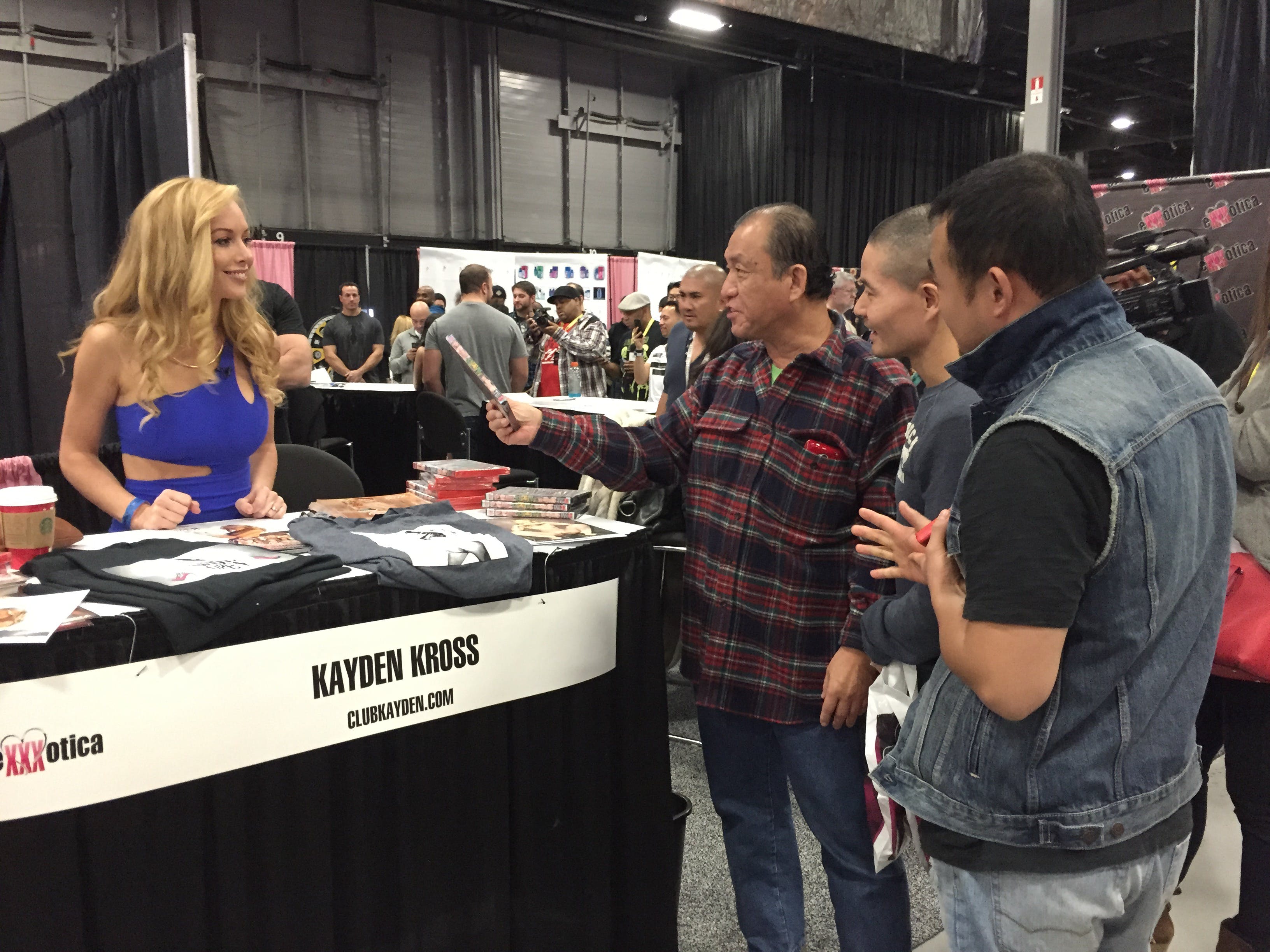 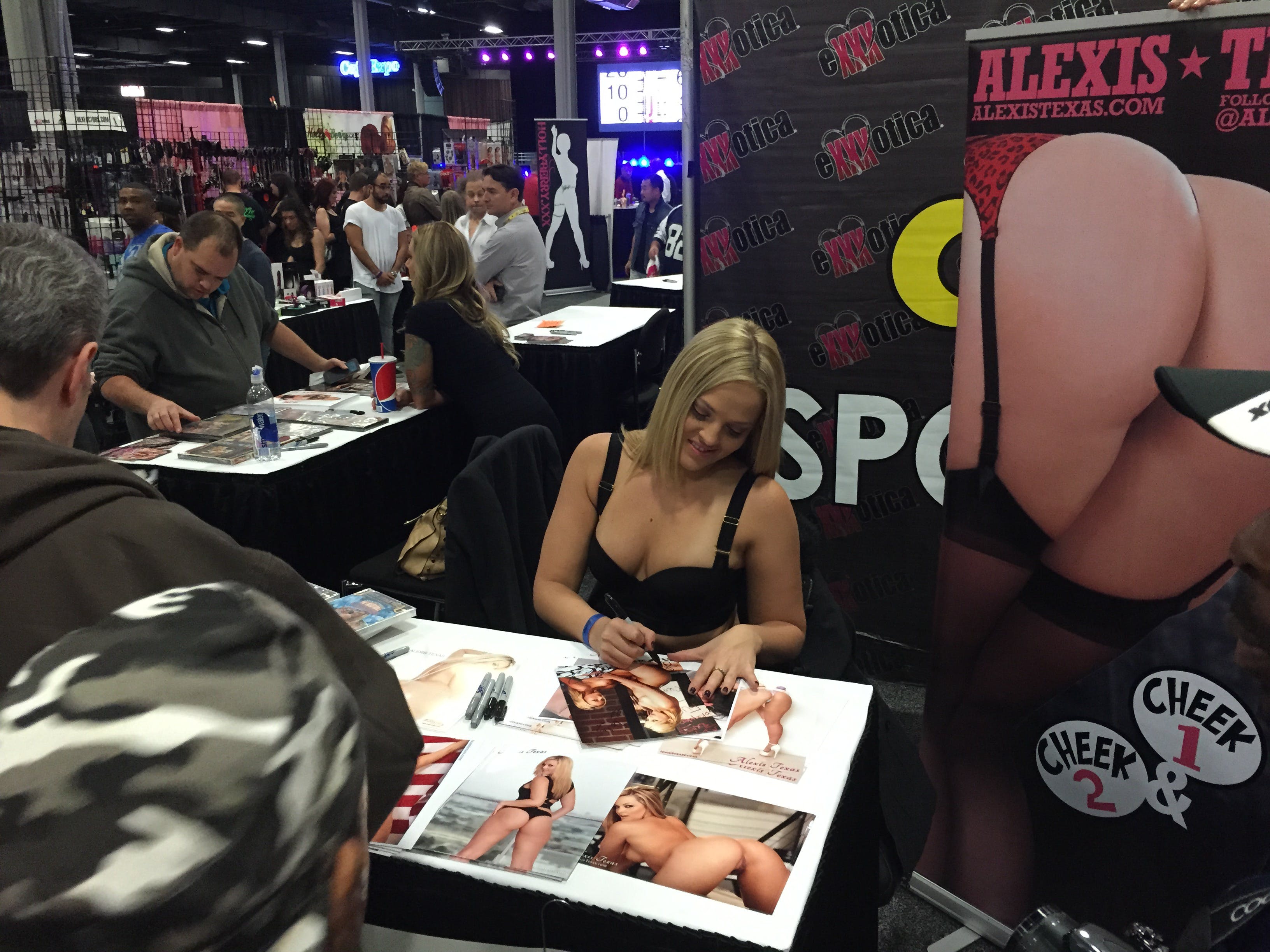 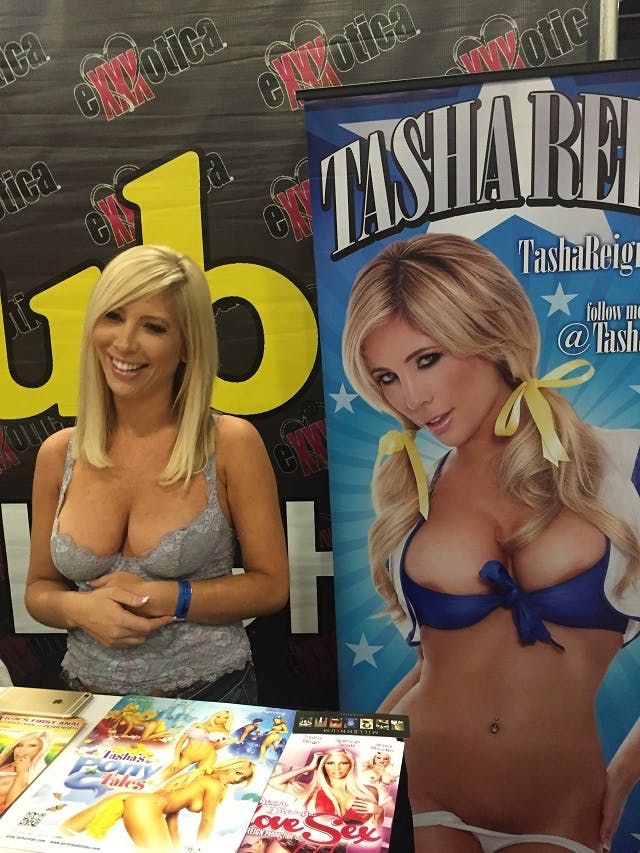 After graduating from college, Tasha celebrated by taking herself on a European vacation. When she came back, she was concerned she wouldn’t be able to find work, even though she was only gone for a month or two. “Our industry has a very short attention span. When you leave people don’t care,” she says. “So when I came back, I was like, ‘Why am I not booked solid?’” Although she says she’s working regularly now, when I later spot a fan toting one of Tasha’s DVDs, I can’t say I don’t feel a pang of relief for her.

2:45. I reconnect with Alex, who is brimming with excitement over seeing dick-shaped hot dogs, and we run into Evan Stone, the legendary male woodsman; unlike the other performers, who are stationed at booths, he’s walking around and clowning around with fans. Stone is wearing 20-year-old spandex zebra print pants from his strip club days. This is his fifth Exxxotica: “They thought they were hiring Ron Jeremy, then they fucked up and I was already here,” he says. (Jeremy is appearing later that night.) 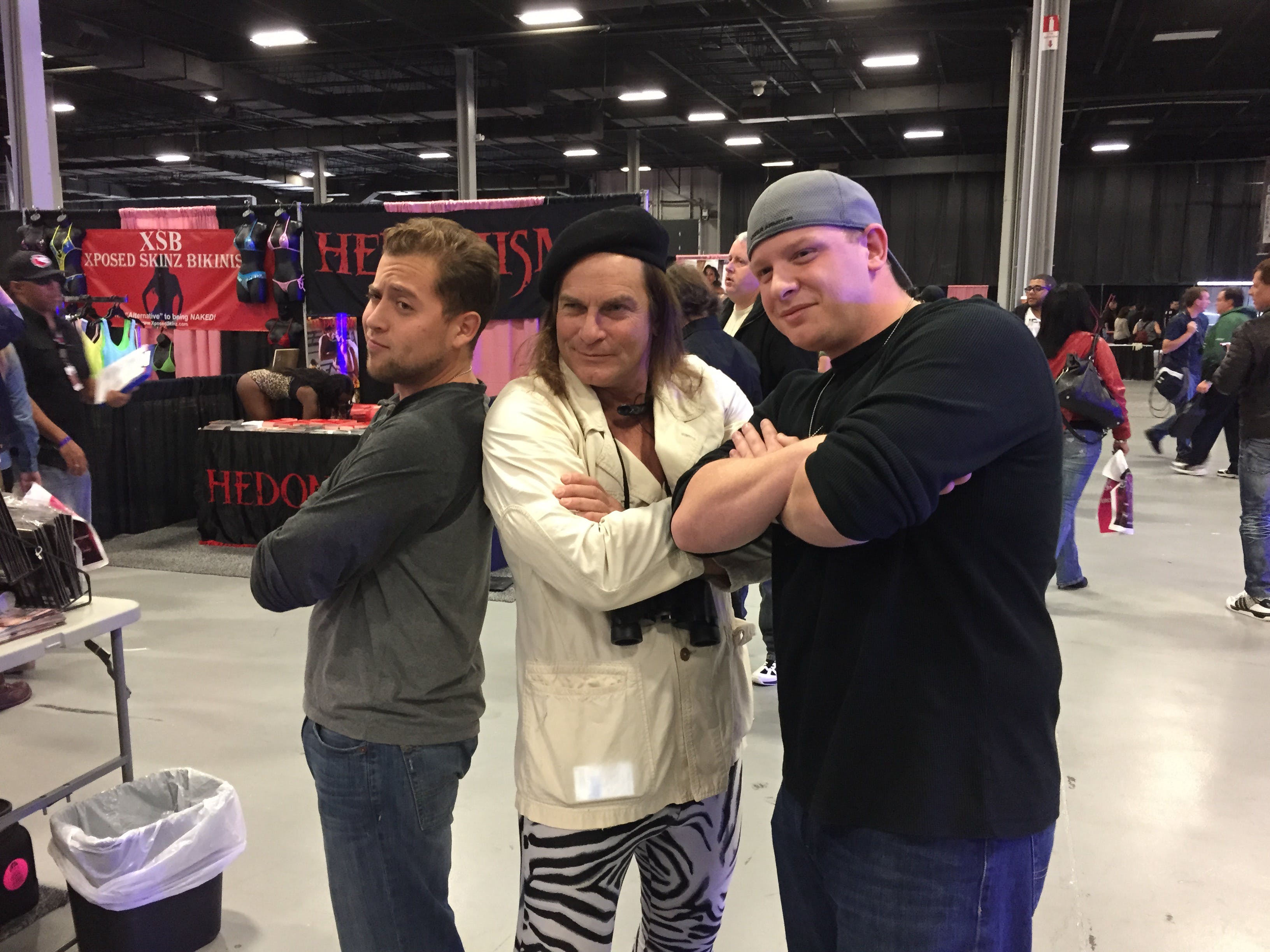 “You gotta not want to steal from someone,” he says of his fans. “You gotta look at that guy and say, ‘Oh, Evan Stone? Nah, I don’t wanna steal from him.’” I ask him why he thinks he’s engendered so much loyalty from his fans, when so many other adult performers are struggling to make a solid income. “I don’t take myself too seriously,” he says. Looking at his zebra-print Spandex, it’s hard to disagree with him. 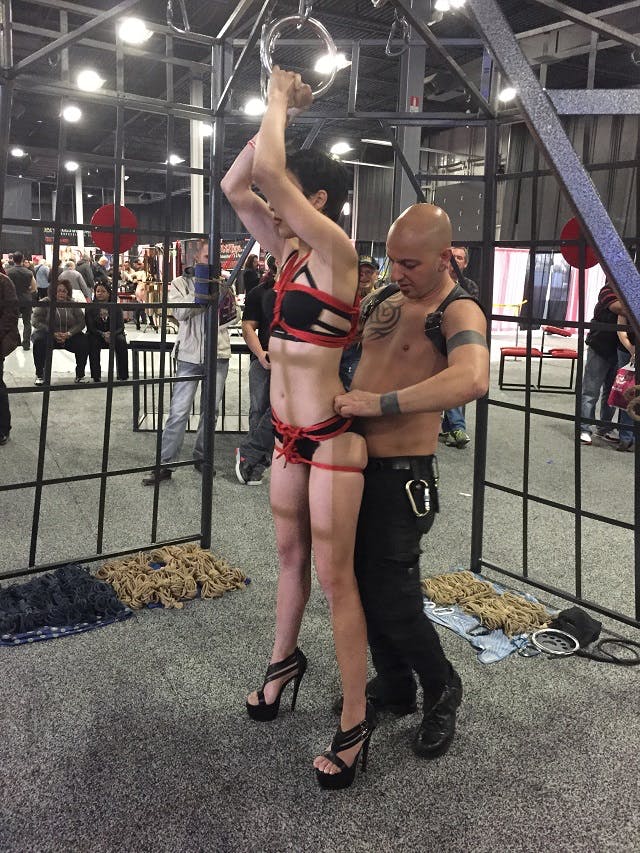 Despite the popularity of webcamming, however, the seminar, which is led by a female representative from the cam platform Chaturbate, is poorly attended. I listen to her talk about the importance of building an appropriate URL for your cam site before going to Evan Stone’s seminar, where he’s sitting on the edge of the stage, waving his legs like a 14-year-old, and enthusiastically extolling the merits of eating pussy. 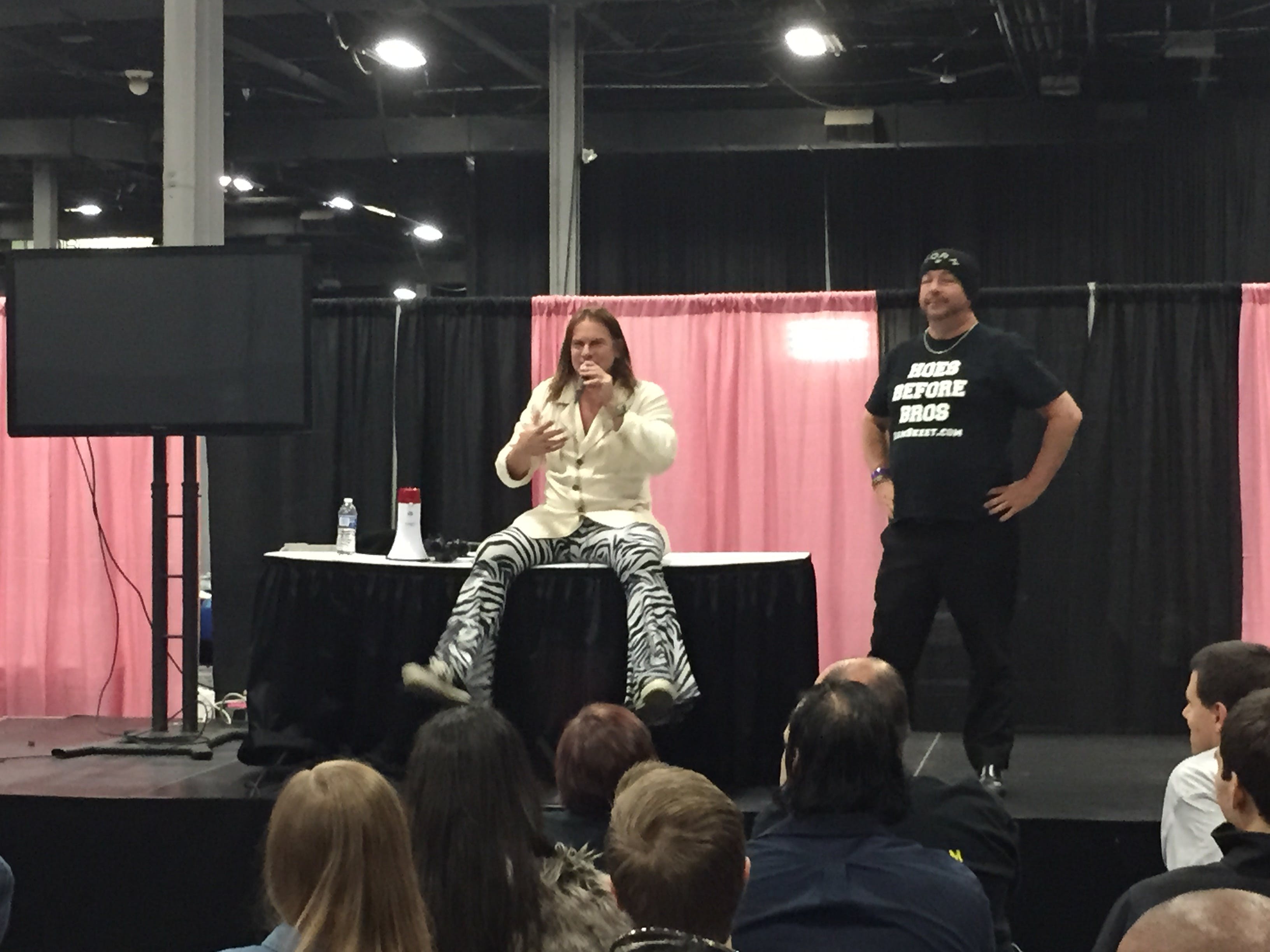 “Is it possible they find you guys patronizing, because you’re offering them help when they’re not asking for any?” I say.

“We try not to condemn people or be patronizing,” Dave says. “We just want to say we’re here for them.” And they are, in a way. Dave says the XXX Church passes out snacks and bottles of water to performers while they’re working, and they even set up a break room for them at the expo. “If they didn’t have that room, they would just go to the bathroom to change and do their makeup,” he says. I want to ask him so many questions—for instance, if God created the  body, and the body is beautiful, what’s the church’s stance on Pussy Juice Lube?—but Alex has to get back to the city, so we bid Dave and the Expo adieu. 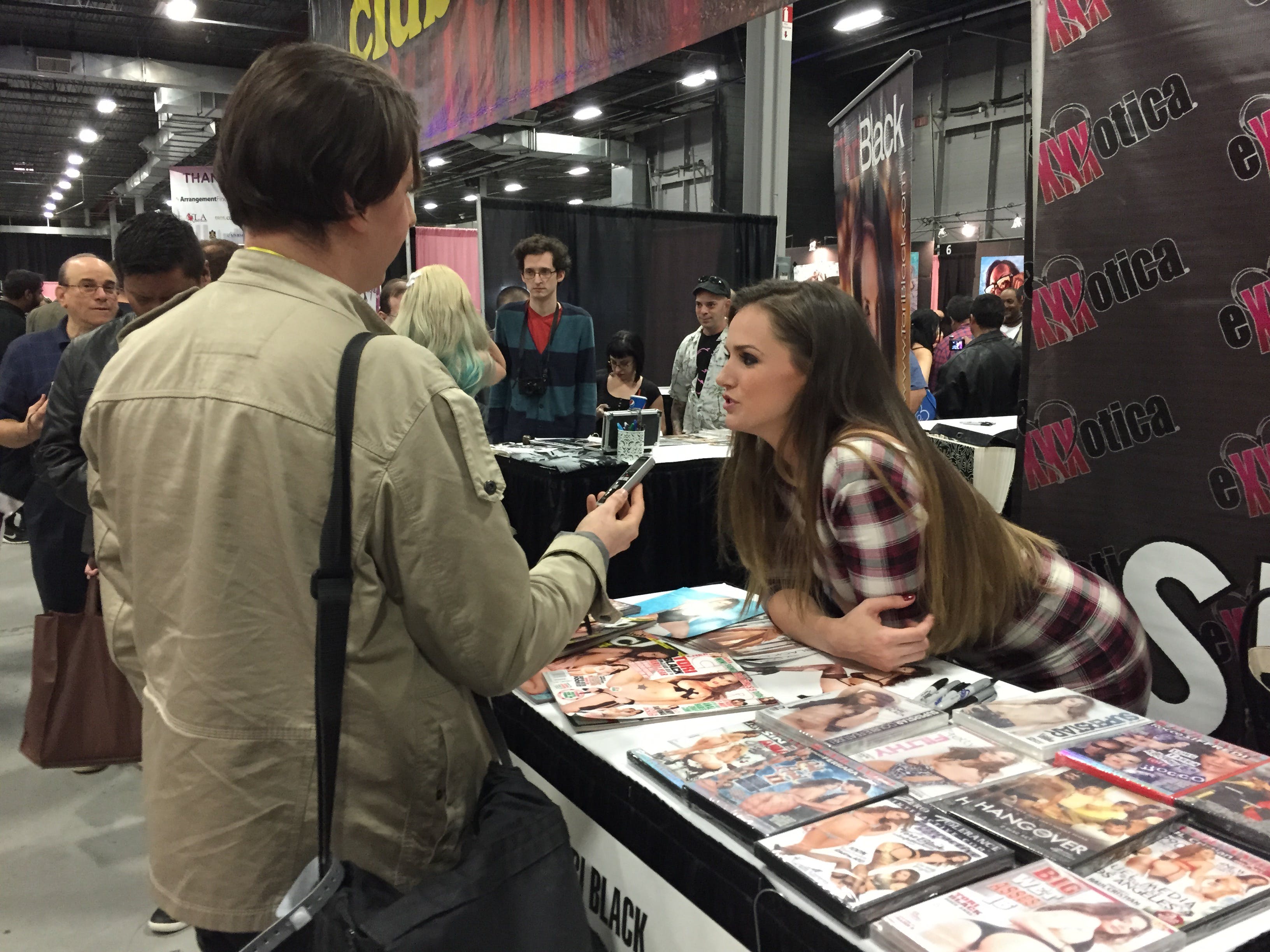 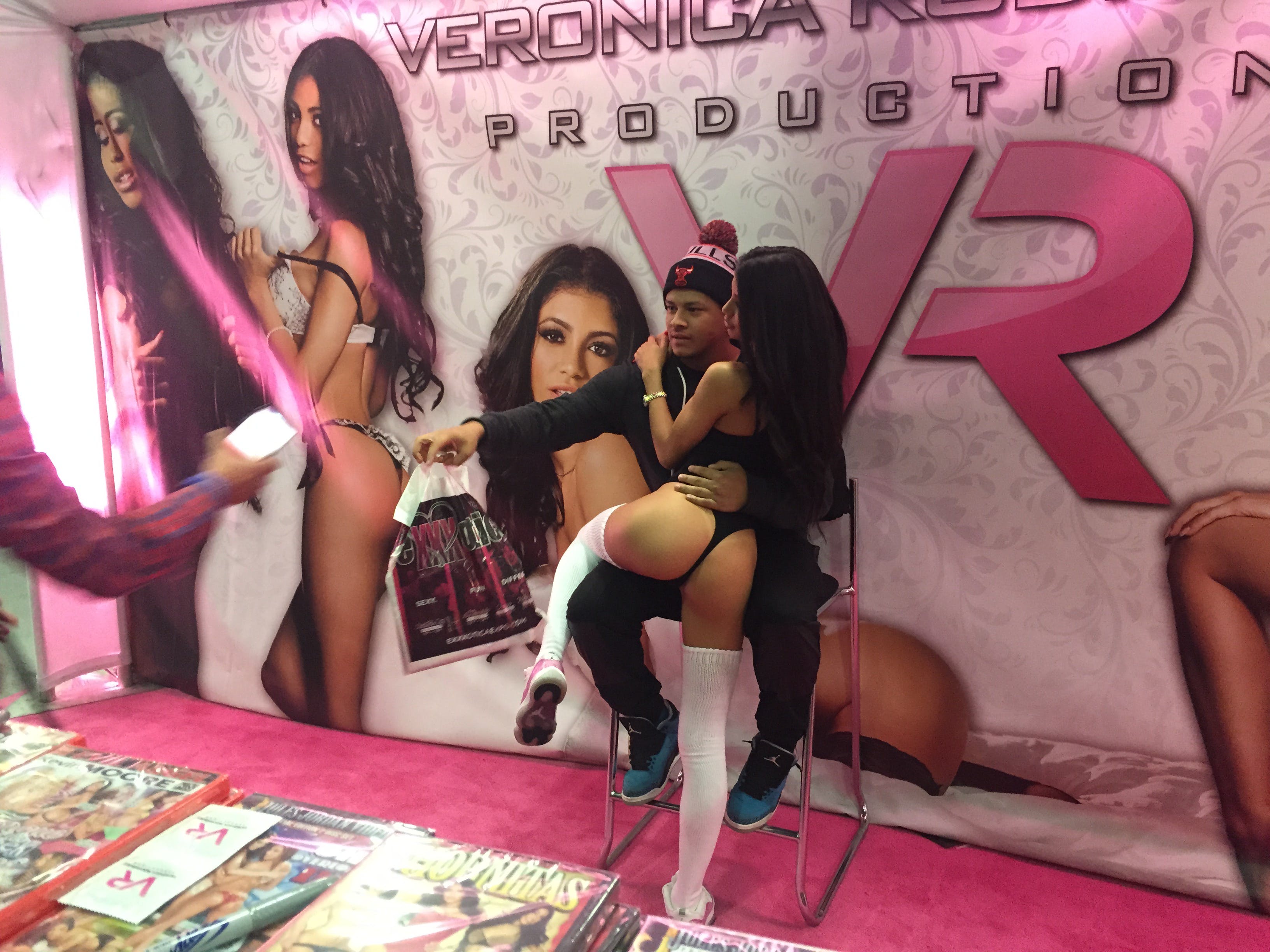 4:15. In the cab, Alex is trying to untangle his thoughts about the convention. Although he’s pretty aggressively masculine in most respects, he’s also one of the most sensitive people I’ve ever met, so I’m not surprised to hear that his experience there affected him.

“Those girls were just parading around, being shown off like objects,” he said. “It was depressing in a way. It was like—”

“A circus,” our previously silent cab driver chimed in.

At the train station, I tell Alex I didn’t think his classification of Exxxotica as a circus was very fair. I deliver my standard sex-positivity shpiel, the same speech that I give to anyone who, upon finding out what I write about for a living, claims that pornography is disgusting or degrading to women—that women have the right to do what they want with their bodies, that sex is not something to be ashamed of, that sex work and the adult industry are businesses like any other and that the men and women who participate in it shouldn’t be fetishized. I say the things he objects to about Exxxotica— the stilettos, the fake tits, the fans grab-assing performers, and the generally cartoonish approach to sexuality—are products of a culture that’s simultaneously obsessed with and horrified by sex.

Alex nods. “Yeah,” he says, “but wasn’t there something about it that just made you sad?” I think about the men and women who sit at booths all day to politely chat with fans, in the hopes that maybe they’ll forge a connection that’ll convince them to subscribe to their websites; in the hopes that they’ll think of them as real people with real problems who need to pay real bills, rather than bouncing and panting images on a screen. And I admit that Alex might have a point about Exxxotica. Maybe it did make me a little sad. But not for the same reasons.