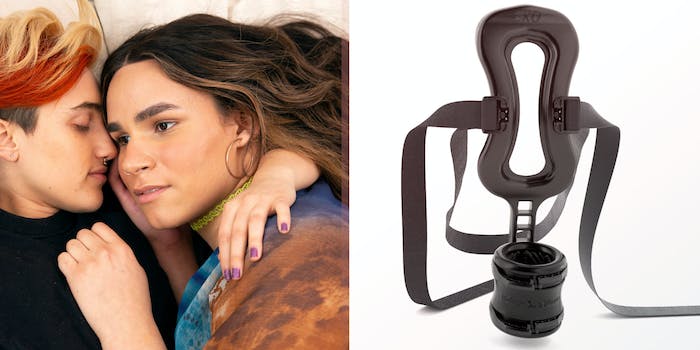 It could be a game-changer for closing the pleasure gap.

Sex toys for trans women and trans feminine customers are a rarity in adult stores, even among feminist retailers. But one new sex toy looks to bridge the pleasure gap between trans feminine people and their cis counterparts. Meet Exo, the hands-free stimulator that lets trans users with penises pleasure themselves without direct genital contact.

The Exo is part harness and part stroker. Users strap the device onto their body, lube up, and grind against its sleeve for as long as they desire. The Exo is explicitly advertised with a trans feminine user on the device’s homepage, but the toy also works well for cis men interested in grinding their penises hands-free too.

The Exo features polyester straps and snap buckles along with a plastic stomach plate that suspends a soft, silicone sleeve for the user’s shaft. The sleeve can be adjusted for the owner’s size, letting them comfortably stimulate their genitals without directly interacting with their penis. It’s a useful feature, given hormone replacement therapy can decrease a trans feminine person’s penis size over time. The body-safe sleeve also comes in two colors, black and pink, letting users keep their stroking experience relatively gender-neutral compared to, say, penetrating a stroker reminiscent of a vaginal fleshlight.

Exo’s initial design motivation came from a “desire to add to the trans female sexual experience,” company founder Lucas Hartmann told the Daily Dot, although it’s since expanded to “provide something special for the LGBTQIA+ community” as a whole. “I think [it] would be wonderful if Exo could be known as ‘Trans Female inspired, LGBTQIA+ approved,'” he said.

Hartmann has a background in both design engineering and 3D printing, and the product itself went through several rounds of tests and changes. “Intuitive simplicity,” Hartmann told the Daily Dot, was core to the Exo’s design. His goal was to design a toy “for a wide range of physiologies, while also being intuitive and simple.”

Sex worker Savannah Sapphic looked over the Exo’s features and called it an “amazing toy” for trans feminine people with penises, although she stressed that genital dysphoria is a spectrum, and there’s no one-size-fits-all solution to experiencing it during sex. Still, she found the toy an exciting start for products geared toward trans women and trans feminine consumers, especially given its price point. The Exo is $49.99 on pre-order, $69.99 after launch.

“In terms of penis attachments, I find this to be pioneering, akin to when the fleshlight market expanded to the fuckdoll market etc.,” Sapphic told the Daily Dot.

Another trans sex worker, Nikola Ophan, echoed Sapphic’s point of view. She told the Daily Dot how there’s “not much thought put towards trans feminine people as actual people with desires and needs of their own,” which can lead to a pleasure gap in adult stores. But, she said, Exo signals how the market is “becoming more accessible” for trans feminine users as the industry changes.

“I think it’s an interesting concept, and looks like it’d be fun!” Ophan said. “I personally don’t experience much genital dysphoria, but it seems like it’d take focus of the sensation away from the straight up ‘stimulating a penis’ and move it more towards just a ‘motion that feels good,’ which I’ve seen help a lot in my gfs!”

Exo may not be for everyone, though. Aithne Feay, a self-described “begrudging dick-haver,” thought the Exo looked too “intense.” Instead, she felt the Exo’s uses were limited to bottoming during penetrative sex, as one could simply grind their penis against a soft surface without the Exo, she told the Daily Dot.

“It just looks like a lot,” Feay said. “Like, I would probably want to wear a t-shirt over it. Like, ‘dont’ tell anybody.'” (Editor’s note: Feay previously contributed to a Daily Dot story.)

Constance Augusta Zaber, who has over half a decade’s experience in the sex toy retail industry, expressed caution to the Daily Dot. She said that she would refrain from forming an opinion on the Exo until after examining its build quality and usability against its price. She also criticized the growing binary in sex toy marketing that espouses there are “sex toys for trans women,” as opposed to sex toys that some trans women and trans feminine users may enjoy, depending on a wide range of factors.

“I think we’re going down a path of creating a stable category of ‘the trans woman on hormones’ that relies on a whole lot of assumptions (dysphoria, not getting hard, stuff like that) which sucks because there’s a whole range of experiences that might not be met,” Zaber said. “Rather than trying to engineer a solution to this problem I think we need to be looking at how we market toys. Almost any toy can be tried out by anyone with any body. It’s the cisgendered marketing language that I think makes it hard for trans people to try toys that they might like.”

Regardless, the Exo may prove an important milestone in closing the cotton gap, something this reporter defines as “a significant gap in sexual education resources between cis women and intersex and trans feminine folks.” Toys like the Exo may help trans shoppers communicate their needs and desires better through exploration and experimentation, and it may open a wider conversation on recreating a trans-inclusive sex toy industry. So even if the Exo falls short of its goals, its presence alone may prove a milestone for the industry.