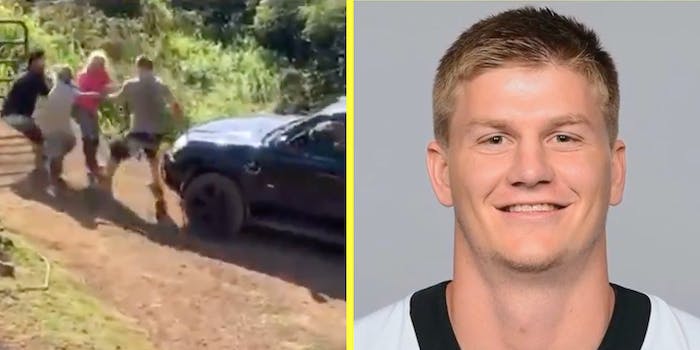 Two individuals, alleged to be Mitchell Loewen and his mother, can be seen tussling with members of the family in the video.

A video has surfaced showing a man alleged to be former NFL player Mitchell Loewen tussling with members of a family, including at least two senior citizens, while allegedly trying to trespass their property in Hawaii.

The video, posted by Preston-Sharisa Kaahanui-Kepano from Wailuku to Facebook, shows a man said to be Loewen cutting through a metal gate on a road surrounded by greenery. “He cut our chain then refused to give it back,” Kaahanui-Kepano wrote in the caption of the Facebook post.

He is then approached by three people, identified by Kaahanui-Kepano as her husband and in-laws.

The four get into a tussle as the man alleged to be Loewen holds on to the chain and the others try to remove it from him.

“Let go of the chain!” says the person from behind the camera.

Loewen is then seen successfully pulling something away from the grips of the two senior citizens and walking to the SUV parked behind them.

Honking from the SUV can be heard throughout the incident.

As one of the family members tries to resist by leaning against the hood, the driver—who Kaahanui-Kepano alleged is Loewen’s mother—drives the car, pushing against the senior citizen.

Meanwhile, Loewen is seen still scuffling with the other members of the family, trying to push one of them. When another senior citizen runs up to him, Loewen turns to him and screams, “What’re you doing?”

The family member who was blocking the car then moves a little to the side, and the SUV rushes down the road, seemingly pushing the senior citizen down to the ground.

“She hits my mother in law then Mitch Loewen used his cutter and hit my husbands shin leaving a hole,” Kaahanui-Kepano alleged in the Facebook post. “They both left the scene.”

According to the post, the incident was kicked off when they were all waiting for police to arrive so that Loewen could show his “paperwork,” but he allegedly didn’t want to wait.  It’s unclear what paperwork Kaahanui-Kepano is referring to.

The video was posted on Kaahanui-Kepano’s Facebook on Sunday. It was reposted to Twitter on Monday, where it has been viewed more than 63,000 times since.

“This is colonization Happening rn in 2021,” wrote one TikToker in a video shared on Twitter.

“They need to be held accountable for their actions!” tweeted another user.

Loewen, 28, had a brief football career. He played for the Saints and Lions from 2017 to 2019 after playing collegiately for four seasons at the University of Arkansas.

Update 7:33pm CT, June 2: When reached for comment, the Maui Police Department confirmed in a statement that “police responded to a report of a multiple-party dispute at a Wailuku property” on the morning of May 30.

“At about 9:57 a.m., Sharisa Kaahanui Kepano was arrested for Unauthorized Entry into a Motor Vehicle in the first degree. She was transported to the Wailuku Police Station for processing without incident. She was released from police custody after posting bail, which was set at $1,000,” the statement said.

The Daily Dot has reached out to the Arkansas Razorbacks, and Kaahanui-Kepano.