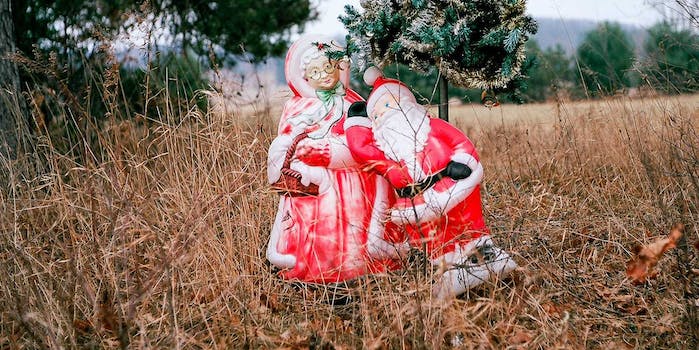 Photo via Jereme Rauckman/Flickr (CC BY 2.0)

Sex sells—when it comes to Christmas cards, at least.

Melanie Sampson, owner of hi, love. greetings in Nova Scotia, Canada, opened her Etsy store in January 2013, and sold sexy cards right from the start. In fact her naughty 12 Days of Christmas card is her most popular. In the hand-drawn design, instead of 11 pipers piping, she offers 11 “naughty spankings,” while five golden rings are, in her sexy version, “5-bottles-of-lube.”

Other cards feature sayings like “You’re well hung,” suggestive ornament and all. Another favorite: “Christmas Sex. It’s a Thing. Trust me.” Another plays on the candy cane’s phallic shape in an unmistakably suggestive way.

Sampson gets inspiration from her own relationship to craft her cards. “My partner and I have been together for over 12 years and I’m happy to say we’re madly in love and very open with each other,” Sampson tells the Daily Dot. “[We’ve] never been shy when it comes to talking about sex, sexuality, kinks, fantasies, and our relationship. I wanted my naughty holiday cards to have the same sense of fun and play as my other cards.” 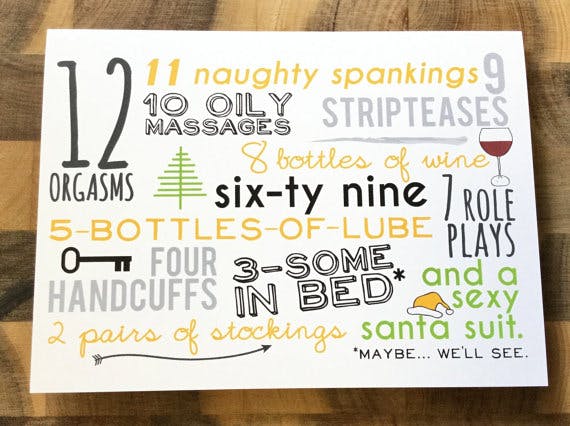 Sampson, who also sells her cards in real life at local markets, says she’s never had anyone write to her about her cards being offensive, but has received negative reactions in person: “At markets, I have had shoppers be visibly shocked when they go from my pleasant greeting and hello to actually reading my naughty cards,” she says. “Some shoppers have actually dragged their friends away.”

She stresses, however, that these naysayers are in the minority: “I see a lot of me in my customers… Thirty-somethings in relationships looking for a non-traditional card to share with their partner or friend.”

Heather Allen, owner of Florida-based Georgie Pearl Designs, started her Etsy store in 2013 and began selling naughty cards last year. She also gets inspiration from her husband, as well as single friends who regale her with their wildest dating stories. Her bestselling naughty Christmas cards say “I Heard Your Stocking was Hung,” and “All I Want for Christmas is to Watch Netflix and Chill with You.”

Allen hasn’t had any complaints from Etsy shoppers, but shares an encounter she had last month while selling her cards at a craft show. She says it’s her favorite customer interaction so far: “An elderly couple was looking at our ‘Netflix and Chill’ card. Unless you are up to date on the meaning behind this phrase, it seems pretty harmless and just plain relaxing, right? The older woman picked up the card, turned to her husband to show him and said quite loudly, ‘Honey, all I want for Christmas is to watch Netflix and chill with you.’ A group of girls, overhearing her rather loud exclamation, burst into giggles. So she turned to look at me to see what was so funny, and I could only shrug my shoulders in fear that I, too, may have a case of the giggles.”

Allen’s first overly racy card was for another, more appropriately amorous holiday—Valentine’s Day. That card boldly states, “It’s Not Going to Spank Itself.” Of the feedback she received for it, Allen says, “I had so many women email me after Valentine’s Day telling me thank you for creating the perfect card to give. I can only imagine the look on those recipient’s faces.”

Dublin, Ireland-based Patrick McCann, owner of Etsy store Huggitos, which he’s run for two years, puts a queer spin on Santa with his line of naughty holiday cards. One features a seductive smile on a muscled, bare-chested man in a Santa hat with “Merry Christmas” written on the edge of his underwear, which peeks out above his jeans. Another features a woman in a Santa hat, bra, and panties with the same greeting. Both were designed in collaboration with McCann’s friends Tim Dowling and Mirco Pinna, who are both gay. 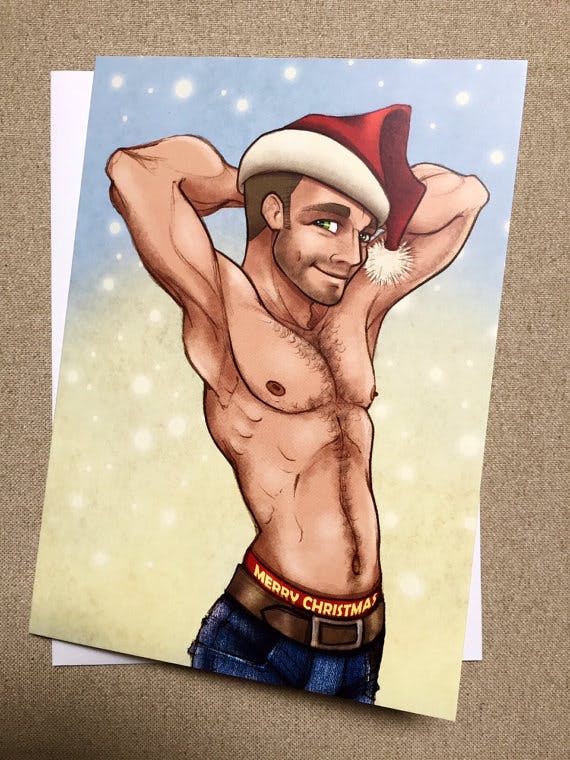 “I suppose we bring a different sensibility to the design process with us,” McCann tells the Daily Dot. “It’s a fine line to walk, but with these particular designs we were aiming for something cheerful and cheeky, but still classy… The Sexy Santa series came from a brief discussion about how women are more objectified in society than men. We wanted to correct that imbalance.”

Huggitos’ other naughty Christmas card features a cartoon man with a thought bubble asking “Top or Bottom?” on the front, and inside says, “Where should we put the Christmas fairy this year?” The adorning image, at least, is suitable for the whole family.

McCann says the cards have been a hit with the gay male community—and with women. One customer gave him this feedback via email: “Between my friends and myself we are a little competitive over who gives out the funniest and campiest gay Christmas card each year. I believe I will win this year.”

One of the most explicit Etsy holiday card retailers puts its explicitness right in the store name: I Love Your Cock. Run by a Toronto seller who goes by Big Rooster, it sells a kinky Christmas card, featuring a drawing of a woman dominating a man, as well as a card featuring a very traditional-looking Santa reading these words from a scroll: “dear santa i’ve been good all year and all I want is a cock to suck christmas day.”

Identifying themselves only as Big Rooster, the seller tells the Daily Dot via email: “As long as I adhere to Etsy policies, I don’t have any issues. My cards only show up if you have the adult filter unchecked. This helps shield my products from the general Etsy shoppers that may find my product too racy.”

Of these guidelines, Sampson says, “It took me a little while to fully grasp Etsy’s rules around what words I was allowed to show in a listing’s thumbnail image, what language I could use in the title, and how I was supposed to identify a ‘mature’ listing. I have an invisible line that I try to not cross when designing cards for my Etsy shop.”

She says she keeps the truly naughty ones for the personal files. “I’ve done plenty of custom orders and cards for my own private use that Etsy would probably deem pornographic,” she adds.

During Etsy’s showcase at its international headquarters in Dublin in June, McCann of Huggitos says he wasn’t sure how his work would be received. “I was curious as to how the content I considered a bit more direct [such as a card with ‘P.E.N.I.S.‘ on the front] would be received, but was told by Etsy staff that the exhibitors were already vetted,” he says. “I spent the evening showing my designs to other Etsy staff and guests who weren’t familiar with my shop and got a great reaction.”

Etsy stats show that sex sells—when it comes to Christmas cards, at least. “It seems like there is something in the air or water this year,” McCann says. “I have no idea what, but when I check my stats on Etsy, ‘sexy holiday card,’ ‘sexy santa,’ and ‘gay santa’ search terms have appeared much more often in the keyword search patterns than anything I have for the other Christmas designs on sale.”

Photo via Jereme Rauckman/Flickr (CC BY 2.0)