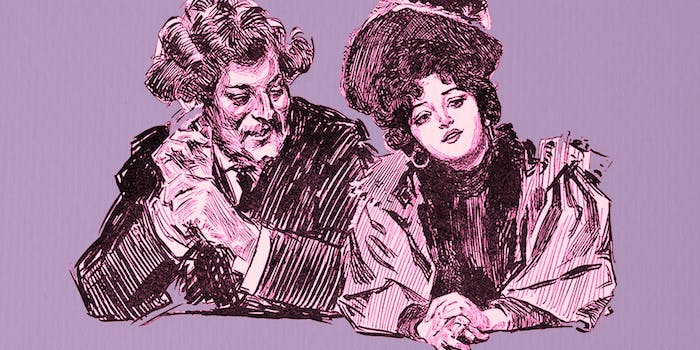 Is it OK to hit on people using apps that aren’t meant for dating?

Save that stuff for Tinder.

Welcome to HTTP’s and Q’s, where we answer your most pressing Internet etiquette questions—Internet-iquette, if you will. Have a Web-based moral dilemma that plagues you each time you unlock your home screen? Send your problem to [email protected] and it might be answered in the future.

Question: Is it appropriate to hit on someone using an app or site that isn’t meant for dating, like Yelp or LinkedIn?

Let me tell you a little story. The month is September. The year: 2014. I was waiting on the subway platform after a baseball game wearing my trusty New York Yankees cap when I noticed a guy looking at me.

“Hey, you just come from the game?”

“Too bad they lost.”

We both boarded the 6 train, kept chatting and happened to get off at the same stop. After a few blocks on the same route, we went our separate ways, and I thought that was that. Until, that is, I got an email notification that he added me on LinkedIn later that evening. Well, that’s pretty fucking weird, I thought. If he wanted to keep in touch, he should’ve just asked for my number. I was fairly certain a guy in finance was not trying to professionally network with a journalist.

But was it really that weird? Perhaps, in the moment, he didn’t think to ask how to best keep in touch, and when he Googled me, he decided for whatever reason that LinkedIn was the best way to get in contact. Nothing ever came of this connection, which was just as well because I was fairly suspicious of his behavior.

In retrospect, however, it seems that his LinkedIn overture wasn’t entirely off-base.

Amelia Diamond at Man Repeller recently wrote a post called “I tried the newest dating app: Uber Pool,” in which she detailed her attempt to find a guy through the car sharing service. But it was after Motherboard writer Kari Paul recently tweeted an exchange she had with a guy on Wallapop, an app for buying and selling used items that I got thinking about whether it’s acceptable to use a non-dating app for dating purposes. It seems like it could be a positive experience if both parties are interested, but has the potential to go horribly wrong when everyone’s not on the same page.

This is on an app selling used electronics, there is nothing on the internet men won't make creepy. pic.twitter.com/RNUW7Z9LkY

In an interview, Paul told me that the guy kept messaging her even after she firmly told this guy it wasn’t going to happen. She finally reported him to Wallapop. A few days later, they replied with a canned response thanking her for helping keep the community safe, saying they’d take a look at his profile, and instructing her how to block people.

Blocking people would appear to be the go-to solution for getting rid of unwanted attention on these non-dating apps. I reached out to Yelp, where many on Twitter personally say they’ve experienced random flirtation, to see what their stance is. A Yelp spokesperson told me via email, “Users who ‘threaten, stalk, harm, or harass others, or promote bigotry or discrimination’ are in violation of Section 6.A.iii of our Terms of Service.”  She confirmed that a user could be removed for repeated violations.

Still, the threat of removal from the business reviewing site is not enough to deter people from giving it a shot. “I’ve been hit on after posting a Yelp review of the DMV!” One woman told me. And she’s certainly not the only one.

Did I just get hit on Yelp? pic.twitter.com/bByvB41NjR

Got hit on while on @Yelp 2day #akward didn't get the memo that @Yelp is the new dating app #confused "No sir, I don't want u, I want food"

Another woman told me via Twitter the story of the time she was selling her bike, and after a prospective buyer left her apartment, he texted her saying “I notice you live alone” and asked if she was seeing someone. The exchange was creepy and made her extremely uncomfortable, she said.

Much like me, others have experienced uncomfortable interactions via LinkedIn, because as Paul said, “there is nothing on the Internet men won’t make creepy.” Jenna Amatulli, an editor at the Huffington Post, said she received a request from a guy who worked in a similar field, so she accepted. “He shot me a message that simply just said he thought I was ‘hot,'” Amatulli told me via email.

She admitted that his message was flattering while also “really strange and unwanted.” She continued:

“I had never actually met him. It’d be one thing if he opened with something else, perhaps I’d have been more inclined to respond? … I want to give him the benefit of the doubt that he’s probably really nice, but that’s just not how you get a girl’s attention. In a positive way, at least.”

Not everyone is totally creeped out by people who go on the prowl over non-dating apps, though. Maureen, a 27-year-old teacher in Washington, D.C., said she received a message from a man after she posted a review of her local DMV. His tone was friendly and the two quickly struck up a conversation. 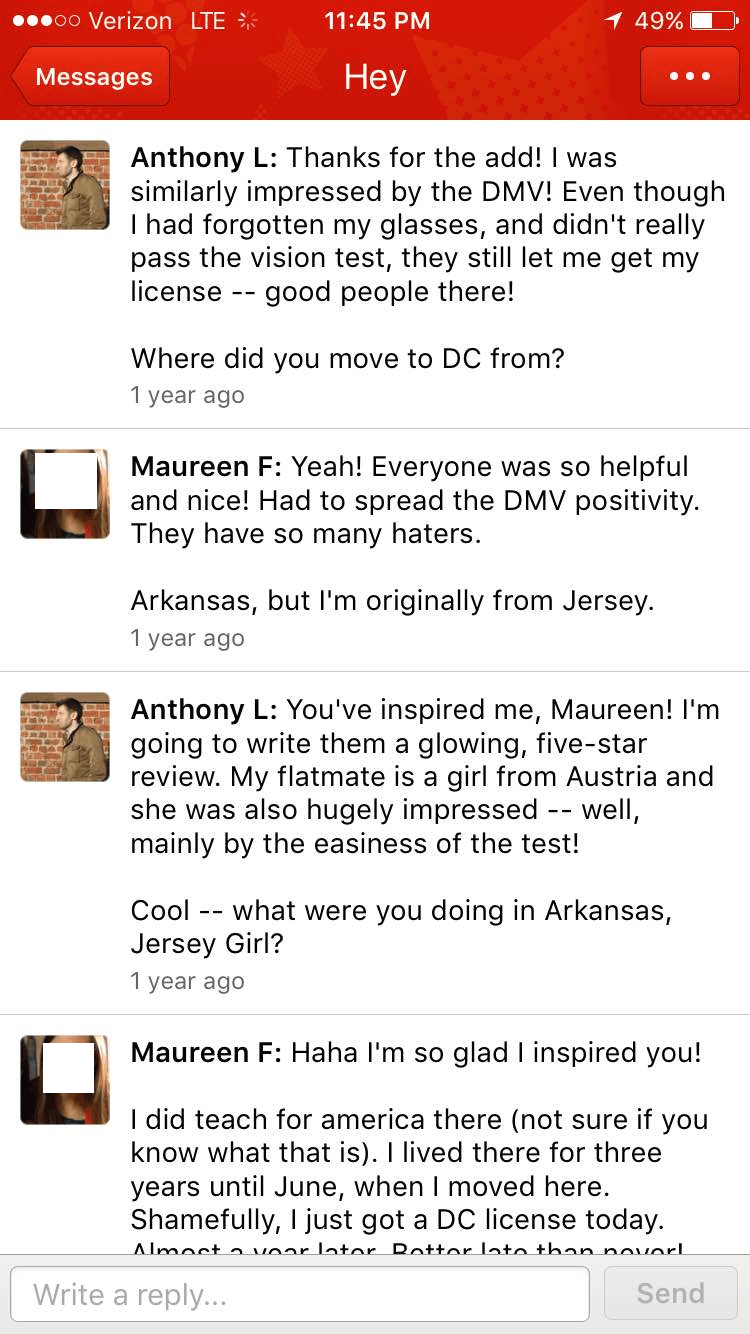 After they’d gone back and forth a bit, “Anthony L.” suggested they get together and she actually gave him her phone number. “I think the worst part is that we texted for a week or so after, we set up a date, and he asked for my full name to add me on Facebook, but then completely stopped talking to me,” she told me, “I assume because he saw more pictures of me and deemed me not attractive enough.”

Then came the real kicker, she says. “About a year later we matched on Tinder (I was curious as to what would happen) even though he already rejected me! It was the same pictures!”

Two years ago, I posited that all social apps exist to get you laid. Today, I’d like to modify that stance: Just because a social app can potentially help you get lucky, it doesn’t mean you should try.