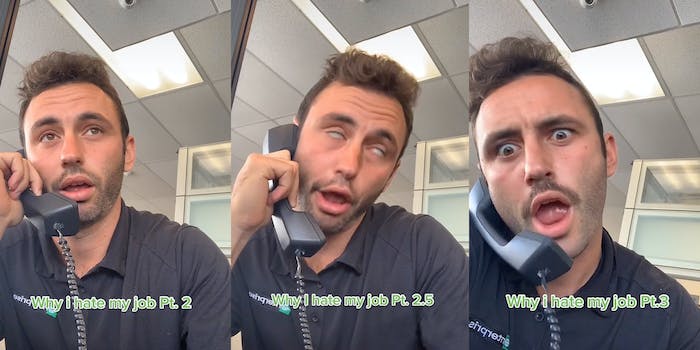 Update 6:30am CT, June 30: A Enterprise Rent-A-Car representative told the Daily Dot the TikToker “is no longer employed with Enterprise, and the TikTok videos were posted after he left the organization.”

“The behavior of the employee in this video in no way represents Enterprise Rent-A-Car’s standard of providing exemplary customer service,” the representative said. “When a customer reserves a specific car class, every effort is made to provide them with a vehicle included within that class. If this does not happen, the branch location will work with the customer to ensure a satisfactory resolution.”

As part of a three-part TikTok series entitled “Why I hate my job,” the user, @yourmomsfriendfromwork, filmed a phone call he had with a client, as he reluctantly had to offer her a Chevy Malibu despite her claim that the company promised to reserve her an SUV. “Love what you do and never work another day of your life,” he joked in the video description.

@yourmomsfriendfromwork Love what you do and never work another day of your life!! #fyp #fy #foryou #foryourpage #customerservice #enterpriserentacar ♬ original sound – YMFFW

When asked by the customer for a standard SUV, he says, “The only issue is, as of this moment, I don’t have one. I have a minivan, or I have a full-size car. And then I can send a full-size car, something like a Chevy Malibu or Nissan Altima.”

The customer responds by saying she was promised an SUV. “The reason that I’m picking it up today is yesterday afternoon, when I was supposed to pick it up, they gave me the same song and dance, and they said we will have an SUV for you tomorrow morning,” she says on the other end of the phone call.

While some commenters found the situation amusing, calling the customer a “Karen,” others were more sympathetic.

“Probably ain’t your fault, but she’s no Karen… People rely on what they are told by a company,” one commenter said.

“If you could make an SUV magically appear, you’d be in a different career field,” another joked.

The worker later responded to commenters, saying, “I don’t disagree [that the customer has a point] I just have no control over the process of how a 30 billion dollar company works.”

The worker also seemingly confirmed that “reservations mean nothing.”

“I learned the hard way reservations mean nothing,” one viewer commented, to which @yourmomsfriendfromwork replied: “Nunca” (which means “never” in Spanish).

@yourmomsfriendfromwork and Enterprise Rent-a-Car’s Corporate Communications team did not immediately respond to the Daily Dot’s request for comment via email.