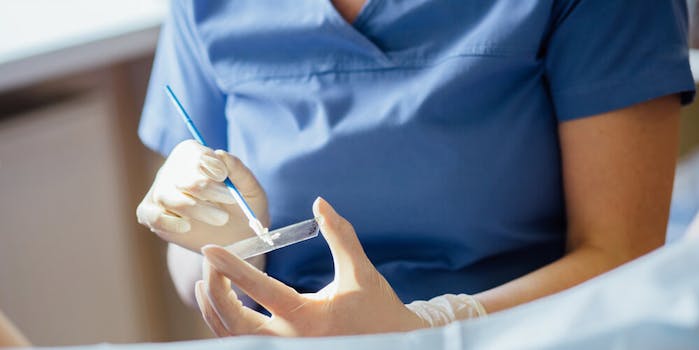 #EndSmearFear is aiming to save lives

The viral hashtag encourages eligible people to get a smear test (or Pap smear).

Smear tests, commonly known as Pap smears in the U.S., are essential for the detection and prevention of cervical cancer. Unfortunately, due to a combination of embarrassment, stigma and, for some people assigned female at birth (AFAB), trauma and/or medical conditions that make the process painful, between one-third to half of all eligible people either put off or avoid getting their test done entirely. Charity Jo’s Cervical Cancer Trust started the hashtag #EndSmearFear in partnership with Twitter in order to try and address the issues keeping people from seeking this life-saving diagnostic care.

ℹ️ #SmearTests aren't always easy. Fear, not understanding what the test is for and embarrassment make booking and going for a test hard. For other women, including survivors of sexual violence or those with some health conditions, it can be especially difficult. (2)

The hashtag quickly went viral, with everyone from gynecologists to ordinary tweeters posting messages of support, sharing their own smear test stories, and encouraging people to go in and get that test they’ve been putting off.

In mid smear I ended up saying, 'I suppose once you've seen one, you've seen them all.' The nurse mumbled something and sneezed. I said, 'Sorry if mine's a bit dusty, I did have a shower this morning.' We had a bit of a laugh. It's nothing to be scared of #endsmearfear

My gran died at 63 from cervical cancer so have always been aware of the importance of smear tests, it might be awkward but getting cancer is worse @JoTrust. My smear test tip is to try relax during it, I often just chat away to the nurse as if it’s not happening #EndSmearFear

Smear tests aren't always easy but @JoTrust want to #EndSmearFear by talking more about our vaginas, cervixes and smear tests. There’s no vagina emoji but my favourite is ♈️ & my smear test tip is to tell me if you're scared. What's yours? pic.twitter.com/liSwl2JF4X

A smear test quite possibly saved my life ten years ago.

No they’re not pleasant but then a lot of things aren’t. If it saves your life, it’s worth every second of being uncomfortable.#EndSmearFear

Writer and sex educator Alix Fox shared a number of tips to help make getting a smear test easier, including asking for a smaller speculum.

Whether they make you nervous, stressed, trigger trauma, or you merely see them as an inconvenient foof-based faff, no-one relishes smear tests – but they can save lives. I'm supporting @jotrust this #SexualHealthAwarenessWeek to #EndSmearFear. Read on for my #cervicalsmear tips

1/ You can ask for a smaller speculum and to insert it yourself if that makes you feel more confident. Some medical centres will let you borrow a speculum to practice with at home if you explain that smears make you feel wobbly. #EndSmearFear

Alix also suggested the My Body Back Project in London “for women & trans men who have experienced sexual violence where you can get a smear with teams who’ll be especially aware of your needs.”

2/ The My Body Back Project run clinics in London especially for women & trans men who have experienced sexual violence where you can get a smear with teams who'll be specially aware of your needs. STI testing & coil fitting too #EndSmearFearhttps://t.co/isek3uw2Wv

4/ Lesbians & women who sleep with women need smear tests too – regrettably, their needs are often overlooked or misunderstood by healthcare professionals. @LGBTPartnership are working to put this right & spread accurate info – https://t.co/QoofM4WQIC

Some users shared their stories of positive test results and what happened next to demystify the process and remind everyone what the stakes are.

So happy to see lots of #EndSmearFear posts today. Important to remember that it’s not as simple for some women. I had abnormalities & had a biopsy at Colposcopy. I shared my story with @itsbinkybee here if you wanted to hear real experiences & advice! -> https://t.co/S1jctIYa9V

Others took the opportunity to call for more research to improve diagnostic and treatment measures, and to raise awareness of the fact that smears are painful for some people and the rhetoric about painlessness is likely to drive them away.

#EndSmearFear by creating robust protocols to stop nurses from overriding patients' consent mid-procedure. Or by not belittling patients who are afraid or in pain. Put the emphasis on the NHS to be better, rather than trying to tell patients to buck up and take it with a smile.

There were also a number of queer and trans twitter users, as well as trans-affirming professionals, reminding people that it’s not only cis women who have cervixes and need to get smears done, as well offering advice on how to access that care as painlessly as possible.

When talking about the need to #EndSmearFear, please remember to not only address cis women but also trans people, non-binary people, basically anyone with a vagina.

When booking an appointment tell them to add a note with preferred pronouns and explain if you feel its going to affect you in terms of dysphoria. Cervical screenings are particularly painful for trans people both physically, mentally and emotionally. Self care! ❤️#EndSmearFear https://t.co/Ew1JcQw0Iu

The idea of getting a smear as a trans man triggered my dypshoria to the point I almost didn't go. But the nurse was respectful, understood the challenges, and was kind. #EndSmearFear

If you live in london, and you're a trans guy, trans masculine, nonbinary, or anyone who has a vagina and is not a woman – get your smear tests done at @Clini_Q or @56TSoho

Free, trans friendly services where you won't have to worry about being misgendered ❤ #endsmearfear https://t.co/LFoquzByDm

Which Jo’s Cervical Cancer Trust was quick to sign off on.

Smear tests are free for people 25 years and older in the U.K., so if you haven’t had yours, make an appointment now. It could save your life.