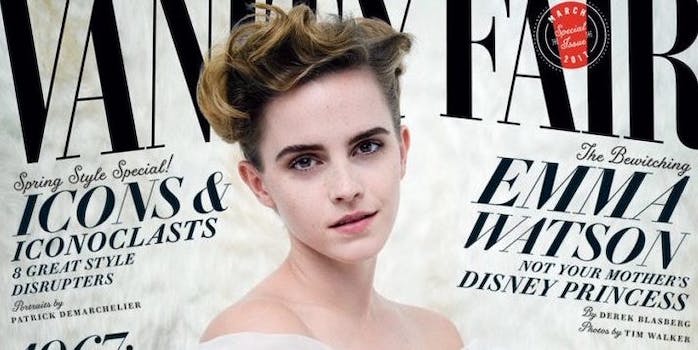 Emma Watson responds to ‘feminist’ attack on her bare breasts

The actress doesn't understand what her t**s have to do with equality.

It seems the ol’ “what makes a good feminist” debate has reared its ugly head, this time in the name of Emma Watson‘s breasts.

Last week, Vanity Fair‘s latest issue was revealed with cover girl Watson wearing a capelet strategically covering her nipples and nothing else in a featured photo. British broadcaster Julia Hartley-Brewer was not too pleased with the vocally feminist star and U.N. goodwill ambassador going bra-less (somehow forgetting the whole bra-burning feminist stereotype), tweeting, “Feminism, feminism… gender wage gap… why oh why am I not taken seriously… feminism… oh, and here are my tits!”

Emma Watson: "Feminism, feminism… gender wage gap… why oh why am I not taken seriously… feminism… oh, and here are my tits!" pic.twitter.com/gb7OvxzRH9

People quickly came to Watson’s defense, though, arguing that the whole point of feminism is equality and choice—i.e., an end to telling women what to do with their bodies and shaming them into being “good,” well-mannered ladies who need to meet one-size-fits-all standards of beauty and empowerment.

why does a woman have to be unattractive/prudish to be taken seriously?

This weekend, in an interview with the BBC, Watson addressed the controversy. “Feminism is not a stick with which to beat other women with,” she said. “It’s about freedom. It’s about liberation. It’s about equality. I really don’t know what my tits have to do with it. It’s very confusing.”