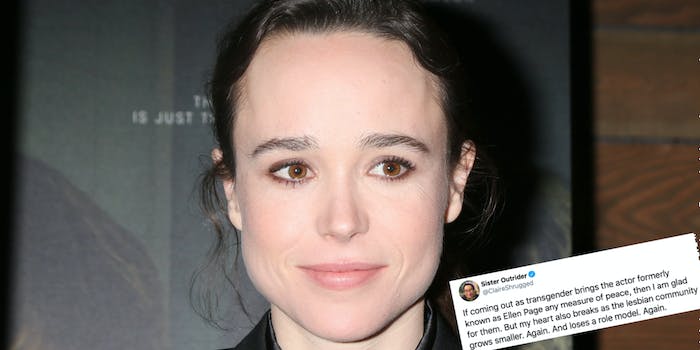 Elliot Page is receiving transphobic hate from lesbians on Twitter

"Where are all the lesbians f*cking going."

On Tuesday, Juno and Umbrella Academy star Elliot Page came out as transgender and non-binary.

Page, whose pronouns are he/they, made the announcement in a heartfelt message posted to Twitter and Instagram. In it, he wrote of the journey that led to his announcement and expressed his deep gratitude to all the people who have supported him on his journey of self-discovery.

Page’s announcement was met with an outpouring of support from his followers, friends, and fans. It has been more than six years since Page publicly came out as gay, cementing himself among the most celebrated members of the LGBTQ community. Much of that community was overjoyed to see Page embracing his truest self, but not everyone welcomed the announcement.

A slew of transphobic messages quickly followed Page’s announcement. This is far from unexpected; in fact, Page anticipated it in his statement. But the origin of much of the hate has caught people off guard, as it’s largely coming from within the LGBTQ community.

Some lesbians have been handling the news of Page’s coming out poorly. Rather than applauding Page for his courage or celebrating the visibility his announcement can bring to the trans community, they’re publicly mourning the announcement as a “loss” to their community. Jesting about the “loss” of a celebrity when they make an announcement about their sexuality is nothing new, but many tweets about Page have been laced with transphobia.

“I feel like our community is diminishing every day I’m too sad to say anything,” user @dykeenabler wrote. Their statement, like so many others, treats Page’s announcement as a loss, and it seems to exclude trans people from the LGBTQ “community.”

Another distraught lesbian, Twitter user @ClaireShrugged, lamented that “many young lesbians now feel that, because they do not perform or feel invested in conventional femininity, they can no longer be women. And so they shift from identifying as lesbian women to straight men. Compulsory heterosexuality all over again.”

Nearly anyone who’s ever come out has likely met at least one person who treated their sexuality as a “choice.” @ClaireShrugged struck that tone in her tweet, which she attempted to soften with a follow-up that still missed the mark.

“If coming out as transgender brings the actor formerly known as Ellen Page any measure of peace, then I am glad for them,” @ClaireShrugged wrote. “But my heart also breaks as the lesbian community grows smaller. Again. And loses a role model. Again.”

“As a lesbian, I would have never thought @TheElliotPage would make me livid,” @tyingmetoyou tweeted. “I half expect @Caradelevingne to do this shit, but not Ellen Page. And the other celeb lesbians applauding this bullshit is unreal betrayal of all lesbians.”

@dykeenabler put it succinctly: “where are all the lesbians fucking going.”

The number of lesbians who chose to deadname Page in their tweets is heartbreaking. They should know better. Lesbians, along with members of other marginalized communities, know how painful and scary the journey of self-discovery can be. To ignore the lessons they’ve learned through their own struggle and heartbreak, and to treat another person’s identity with dismissal, is a terrible thing to see.

The narrative is in dire need of a reversal. Page’s announcement is not a loss, but a gain. As one commenter put it, “We didn’t ‘lose a lesbian’ we gained a trans man and he’s a fucking king.”

Thankfully, many Twitter users shared this sentiment as well. People of all gender identities and sexual orientations celebrated Page’s announcement.

“With the vaccine news, Elliot Page, and Tr*mp losing yet again, this 2020 season finale is somehow pulling off a great feelgood ending,” screenwriter James Moran tweeted. “Didn’t think the writers would manage it.”

Many people also pushed back on the flawed “loss” narrative from lesbians. A number of threads, memes, and carefully constructed explanations dove into why the idea of “losing a lesbian” is completely off-base.

“Elliot page isn’t a fucking fictional character so don’t say shit like ‘we’ve lost a lesbian’ or start deadnaming him ??” @ambicthous tweeted. “They’re a real fucking person who finally felt comfortable enough to share his true self with us so gtfo with your transphobia thanks.”

“All these lesbians talking about ‘losing a lesbian’ now that Elliot Page has come out remind me of these men who follow female streamers and then get mad when they have a boyfriend, same energy and it’s gross just add transphobia to it in this case,” @GrimBitchPaige wrote.

“Elliot Page is not a ‘loss for lesbians’. He’s his own person. and lesbians are not entitled to owning people in the first place,” @JellyfshFortuna tweeted. “It is frankly embarrassing seeing other lesbians think like that.”

The lesbian community is doing fine. Most of us will continue to joyously welcome newcomers into our ranks, but it appears a self-reckoning may be in order for some. As noted by Twitter user @oceansofnovels, the lesbian community already contains many ignored or ostracized people.

“Weird how so many cis lesbians are upset about Elliot Page because ‘there aren’t many lesbians left, this is a loss, blah blah blah’ but those same cis lesbians erase all the trans and nonbinary lesbians,” they wrote. “We exist. If you accepted us, the lesbian community would be much bigger.”