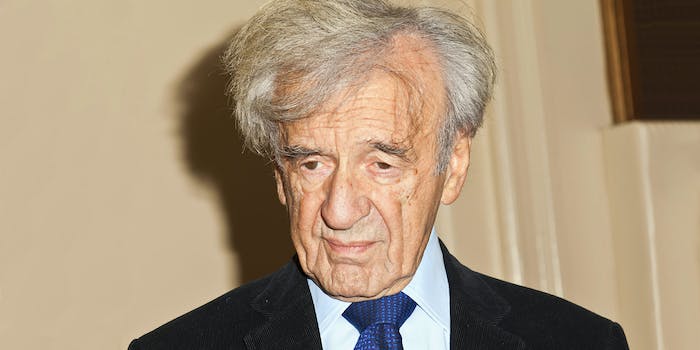 The woman says she no longer wants to bear the burden of this 28-year-old secret.

The American news cycle has been plagued by allegations of famous Hollywood men engaging in sexual harassment and assault, targeting less powerful women (and men). Now, another sexual assault allegation has emerged, this time against influential author and Holocaust survivor Elie Wiesel.

In a Medium post published on Thursday, geneticist Jenny Listman claims the Night author groped her, targeting her in part because she looked like a minor. While studying as a biology major at the University of Pennsylvania, Listman claims she was attending a Jewish charity’s fundraiser in New York City, organized by an “ultra-religious” group, and that she was wearing a conservative blouse and skirt that made her look “about fourteen.”

“The photographer snapped the photo,” Listman writes in the post. “Simultaneously, Elie Wiesel’s right hand had reached my right ass cheek, which he squeezed.”

When I was nineteen years old, Elie Wiesel grabbed my ass & now I wrote about it. #metoo. Feel free to share.https://t.co/MublEcU2Fw

Listman claims the incident left her with “suicidal depression” and “seemingly all-day panic attacks,” causing her immense pain for years afterward. Nearly two decades later, she says she’s finally speaking out after feeling the burden that comes with keeping the incident quiet throughout her adult life.

“I am exhausted from the guilt, fear, and shame and mostly from the twenty-eight-year long burden of keeping this secret in a possibly misguided overestimation of my own capacity and responsibility to protect the world from the knowledge of something evil and ugly,” Listman said. “As if I was required… at nineteen, to throw my body and mind on top of this grenade, for the sake of all Jews, for the sake of the world.”

The internet has since responded to Listman’s accusations, with many defending and sharing her story, in part because they fear others will viciously attack her for coming forward about the beloved Noble laureate.

"Which is it: big enough to destroy or so small that it is harmless? Women are driven crazy and driven to silence trying to answer this question."

this woman is quite brave https://t.co/WSuYLLPVjv

“When I was nineteen years old, Elie Wiesel grabbed my ass.” by @jblistman https://t.co/uwWBpDKKnN ABSOLUTELY NOT TO BE MISSED.

Others say they aren’t surprised anymore by predatory allegations about men in power.

And this is why I'm not surprised by the news about Elie Wiesel. #YesAllMenhttps://t.co/KWksYOIsuZ https://t.co/yrxmZfQFB3

When a creep like Weinstein does it, it’s one thing. There’s a whole other awful layer when it’s Elie Wiesel. https://t.co/fqSQtw7q3e

If you're a powerful person who sexually harasses or assaults others, please know that I do not give a single crap about your "legacy." 1/

Others are wondering why the sexual assault allegations aren’t receiving major headlines, as if survivors need to come out in throngs to be believed. After all, Listman’s allegations were posted on Thursday, and most news outlets picking up the story are small publications serving the Jewish community, not major established media publications like the New York Times or the Washington Post.

Huh? Why is this one being ignored? "When I was nineteen years old, Elie Wiesel grabbed my ass" by @jblistman #MeToo https://t.co/xTdW6kUWQM

Listman ends her post with an important point: By coming out about her alleged sexual assault, she isn’t “ruining” Wiesel’s legacy. She’s simply trying to show the world how he allegedly behaved.

“I am not to blame for robbing the Jewish community of a leader, the world of a symbol, or his family of their memories,” she wrote. “I did not do it. He did. He is the only one responsible for his evil act.”