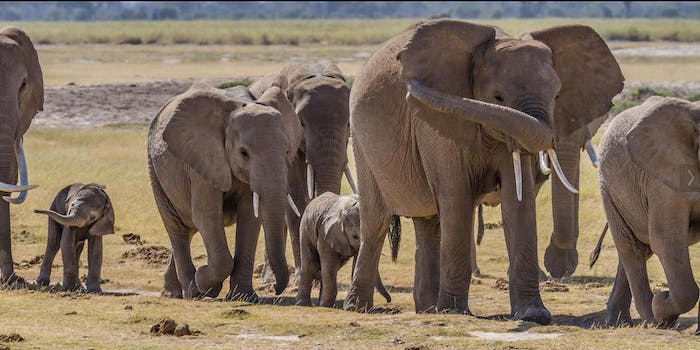 An elephant never forgets to RT.

Elephants are among the smartest and most socially sophisticated animals in the world. They show empathy for their fellow creatures and grieve when a family member dies.

It’s not that crazy. Sharks are on Twitter too.

An organization called Space for Giants has tagged four bull elephants in Laikipia, Kenya, and is following the creatures’ movements on Twitter using the hashtag #ElephantsLive. Evgeny, Tyson, Carlos, and Kimani have GPS collars that allow scouts to keep an eye on them and report their daily movements on Twitter. The organization is using the technology to visualize the roaming patterns of elephants in the same area, and they hope this project will help educate people about elephant behavior and provide insights about how these elephants travel and interact with their environments.

Unlike a recent initiative to tweet out the location of tagged sharks in Australia, the purpose of this project is to invigorate interest in the species, rather than to warn people to avoid sharky waters. The nature of the tweets speaks to the more light-hearted goal, with Space for Giants anthropomorphizing the elephants by giving them perky Twitter personas.

Diana Vollmerhausen, a Space for Giants worker who writes the tweets from the U.K., works with a GIS analyst in Kenya who gives her updates on each elephant’s activities. “We make sure there’s a 48-second delay in any movements we tweet about to keep the elephants safe from poachers,” she told me by email.

“The GPS collars are primarily being used by Space for Giants’ community scouts in Kenya, who can access the data via a mobile phone app. It allows them to get a real-time window into the human-wildlife conflict situation, enabling timely management of any problems that arise.

Vollmerhausen emphasized the project’s goal to raise awareness about elephant poaching. “At present around 100 African elephants are being killed illegally for the ivory every day,” she says. “The tweets are factual in nature including their movement but also personal traits that we have picked up following them over time. It’s amazing trying to put yourself into the head of an elephant, they all have their very own personalities!”

Here are a few of the first tweets:

Carlos: A balmy day in Meru National Park today, roaming around the bush with Kimani. Live is good. #ElephantsLive

Morning! I’m Evgeny. They think I’m around 30 yrs old. Look forward to showing you around Laikipia via #ElephantsLive pic.twitter.com/9fQz5pukiw

Kimani: Wow we are popular! So many new followers this afternoon. Thanks for saying hello. #ElephantsLive

I hope they’ll incorporate more photos into the story. Right now there’s only one.

If you’d like to see more of these elephants, check out this YouTube video of Kimani, who’s described as “an extremely accomplished fence-breaker.”