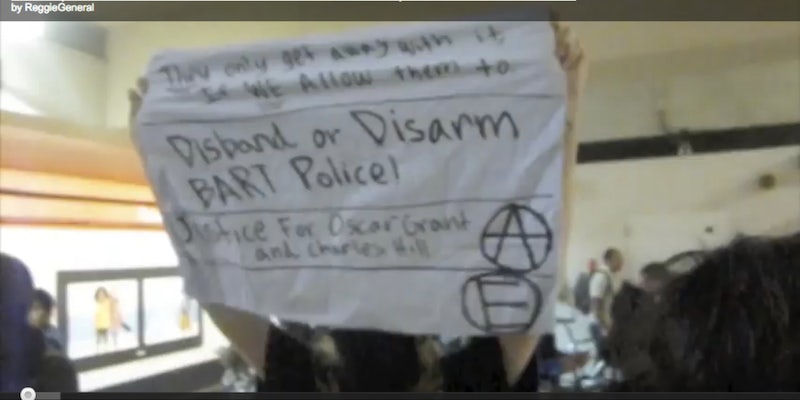 Electronic warfare may sound like a something that will happen in the far-off future.

But the San Francisco Bay Area is getting a taste of it right now in an electronic battle that is pitting hackers against transit authorities – and stirring a tempest of emotions .

This particular skirmish began Thursday when authorities at BART – the Bay Area Rapid Transit District – decided to head off a planned protest by shutting off cellphone service in its downtown San Francisco stations where the protest was planned.

(Demonstrators were protesting the fatal shooting of Charles Blair Hill by BART police on July 3  in San Francisco.)

Cellphones have, in fact, become defacto organizing tools for protesters worldwide. Most recently this was evidenced in the recent London riots.

Civil libertarians immediately cried foul over BART’s actions and many questioned its legality. Twitter , email lists and news sites were aflame with cries of  censorship.

The infamous hacker group, Anonymous threatened to retaliate by shutting down BART’s website. On Sunday, it took action. While it did not shut down the transit agency’s main site, it did successfully hack into a BART site, myBART.org, successfully taking and then releasing customer data.

As of Monday morning the site was still not working properly.

Protesters are now calling for another protest tonight. Officials will be watching and so will we.

All this has continued to ignite debate in San Francisco, dot-com central.

We used Storify to bring you some of the latest reaction.