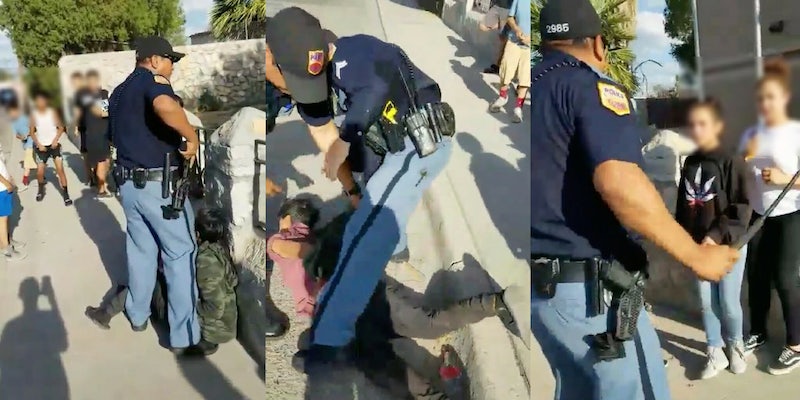 El Paso cop waves gun at group of kids, drags one into the street

The officer is now on desk duty while under investigation.

An El Paso Police Department officer is under investigation after being recorded unholstering his gun and waving it at a group of children, dragging one child into the street, and threatening the group his baton.

In the video, uploaded by Facebook user Aj-king Stoner on July 6 and already garnering 5 million views, the officer is seen having detained a boy, holding his hand to the boy’s head while he sits on the ground. The cop then tells a group of six children, including some who appear to be teenagers, on his left to get back as they yell and swear at him. He then unholsters his gun and points it at them with both hands. He then returns it to the holster and reaches for it several times while pinning the boy’s head against a stone bridge with his knee before a second officer arrives.

An El Paso cop pointed his gun at a group of children. A boy is pulled to the ground & handcuffed. The cop extends his nightstick & yells at the group to get back. Then the boy recording the video is handcuffed. Video: https://t.co/ctfV6DgX28 Article: https://t.co/gkQruMivj7 pic.twitter.com/cbbgHgfLC8

The two of them then drag the detained boy into the street, where the officer who arrived straddles the child’s back and handcuffs him. The first cop then whips out his baton and tells the group to get back, pushing adults and children to the right of the scene.

Moments later, he detains the person recording the video after the recorder tells the boy on the ground that they’ll “put a report on these two fools.” One of the women the officer pushed then takes the phone as the officer detains the person originally recording the video. The same officer later attempts to get her information, but she runs away. He then tells her, “I know where you live.”

According to the El Paso Times, the incident began after officers responded to a criminal trespass call on July 5.

“The officers arrived and were handling that when they encountered the suspect involved in the criminal trespass and from there the events you witnessed in this video unfolded and that is where we are at,” department spokesman Sgt. Enrique Carrillo said at a news conference on Saturday.

An adult and a minor were reportedly arrested for “interfering with the duties of a police officer,” though no injuries were reported. The officer seen in the video pointing his gun at the children has been placed on desk duty and is under an Internal Affairs investigation to determine whether the officer “followed protocol” or violated department policies. The department declined to provide the Times with its policies on officers “pulling out their handguns or batons during incidents.”