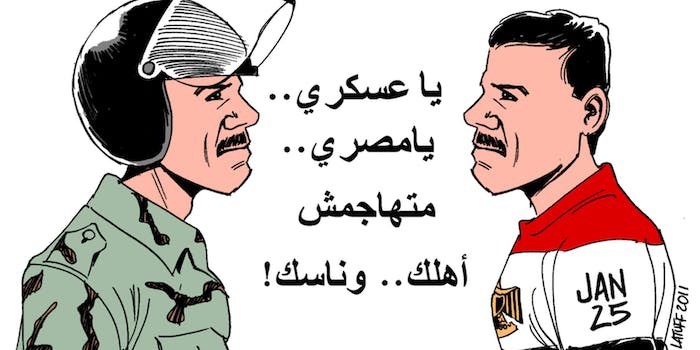 Yet another Egyptian has been arrested for anti-Islam activity on Facebook.

Bishoy Kamel, 32, was arrested Monday and held for four days for managing a Facebook page where people shared cartoons thought to defame Muhammad and the religion of Islam. Any pictoral depiction of the prophet is considered a form of idolatry, and is thus taboo to most Muslims.

Kamel said that while he indeed managed the Facebook page where the cartoons were found, he didn’t control what others posted there, and said the page was “hacked” on Saturday.

The man who reported Kamel, Mohamed Safwat, claimed that Kamel also “insulted members of his own family” on Facebook.

Earlier this year, Egyptian police arrested a 17-year-old boy for a similar offense. Gamal Abdou Massou faced essentially the same charges: posting cartoons of Muhammad to Facebook, where they were shared by his friends. In April, a judge sentenced Massou to three years in prison.

Kamel, like Massou, is reportedly Christian. Kamel faces up to five years in prison if convicted of blasphemy charges.