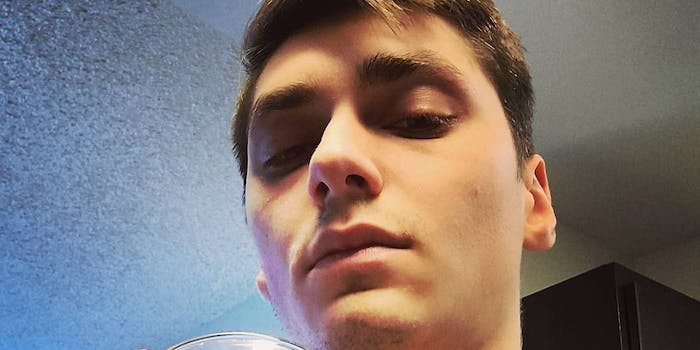 When she confronted him, STUCA allegedly taunted her: 'Ooh, what are you gonna do? Cancel me?'

An electronic dance music (EDM) artist has been removed from a lineup at the upcoming Bass Canyon Music Festival in Washington state following allegations of sexual assault by a former friend.

On Monday, Twitter user “mady,” whose name is Mady Ward, posted a series of allegations including sexual assault, manipulation, and gaslighting by musician STUCA, who is also known as Geoff Bass.

A few hours after the allegations were posted on Twitter, representatives for Bass Canyon told the Daily Dot that Bass will no longer be performing at the event.

“That makes me feel so relieved, and I’m really grateful that decision was made – especially since more women have privately come forward to share their experience of being sexually assaulted by Stuca, as well,” Ward told the Daily Dot on Monday afternoon.

She said two women have shared the information with her in private and were not available to comment further on this story.

Ward said she nearly got into a car accident earlier in August after she was triggered by his name listed in the lineup of the Hard Summer festival in California.

“That served at a big wake up call for me and I realized I would never be able to fully heal from this, knowing it’d happen again and again until someone came forward,” she told the Daily Dot. “I honestly did not want to make a public statement, but I talked with a few friends in the industry and they were able to help me navigate my options and had to make peace with the most effective one – which is this.”

Ward shared that she had conversations with Bass before and after meeting him in which she told him, repeatedly, that she did not want a relationship and wanted to be friends. The second time they met, Ward said he forcefully kissed her when they were saying bye. She said that she continued to tell him that she did not want to have anything more than a friendship with him.

When the two met up the next time, she said he “planted his face into [hers]” the moment she opened the door to her building—she had clarified with him prior to the meeting that there was no expectation for him to stay overnight.

Later when the two were in her room, she said he threatened her with suicide for making him “feel unwanted.” Ward said she sat him down and talked him through it. Out of fear for his safety, she said she stopped him from leaving.

“Once he calmed down, he climbed on top of me, aggressively trying to make out, hands up my shirt, down in my crotch (briefly sticking his fingers in me, and touching every part of my body,” she wrote in the tweet. “He totally smothered me.”

She went on to say even though it crossed her mind to defend herself against him, she was too scared to do so.

“I froze and left my body while he continued putting his hands all over me before telling me he couldn’t get hard,” she wrote.

She claimed she went on to have a “nonlinear” way of processing what had just happened and had conversations with him about his mental health.

Despite telling him that she would be strictly platonic with him, she said he soon suggested that the two try tantra together.

She went on to say she avoided him for two weeks before she engaged with him again and that as a form of PTSD, she felt an “attachment” to him, which was confusing for herself.

Ward said she eventually engaged with him sexually, before he stopped talking to her and said he didn’t want a relationship with her—contrary to what he’d said earlier, according to the allegation.

When she eventually confronted him, she claimed he did not deny it and instead taunted her: “Ooh, what are you gonna do? Cancel me?”

He allegedly also claimed in that conversation that he was not suicidal during their interaction.

Ward went on to have a suicide attempt and major triggers before she eventually reported him to the police, she said in the allegation.

She told the Daily Dot she is now pursuing legal action against him.

Geoff Bass’ management did not respond to the Daily Dot’s request for comments.

Bass Canyon did not clarify whether he was removed as a result of the accusation.

“The allegations about unwanted sexual advances are unequivocally untrue and some of the conversations that are alleged have been twisted or never occurred,” the statement said.