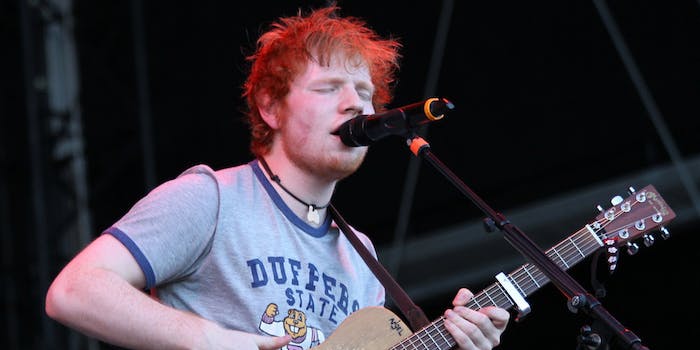 "Ed Sheeran sang her to sleep."

Triona Priestley, an Irish teen who suffered from cystic fibrosis since she was a child, revealed her final wish last week: She wanted to hear from Sheeran, her favorite singer.

Her friends launched a Twitter campaign, #SongForTri, to help make it a reality, and by Sunday night, the hashtag trended on Twitter with thousands of people tweeting at Sheeran.

My friend @trionaaa is V. unwell right now. She needs a shout out from @edsheeran Her friends have bn trending #songfortri Can anyone help?

We don’t realise how lucky we all are, so much we take for granted, hope tonight everyone cops onto themselves #songfortri @edsheeran light

He originally promised Priestley that he would see her once he was in Ireland in October, but with her health quickly deteriorating, her friends feared that she didn’t have that long.

Eventually, Sheeran’s management got in contact with one of Priestley’s friends to set up a phone call. Once he got on the line, he serenaded her with her favorite song, “Little Bird.”

Priestley’s brother, Colm, thanked everyone who supported the #SongForTri campaign.

“What they gave us and her was a beautiful last moment together,” he told Independent.ie. “Triona slipped into a sleep as Ed was singing to her and passed away shortly afterwards. So Ed Sheeran sang her to sleep.”