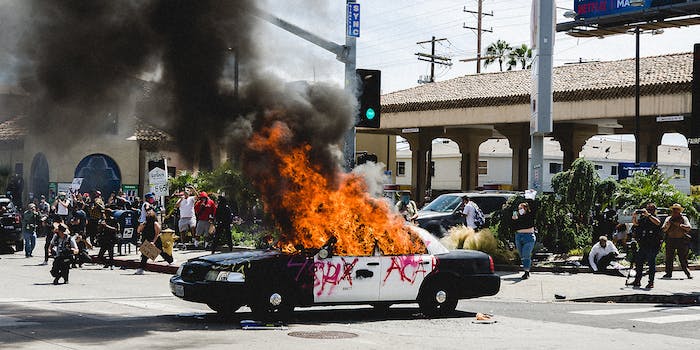 The LAPD denies the accusations.

After a turbulent night of police clashing with protesters in Los Angeles, social media users accused Los Angeles Police Department officers of joking about pouring gas on an area of the city. The department denies the accusation.

The People’s City Council of Los Angeles, a coalition of social and climate justice organizations, tweeted a video of helicopters allegedly flying over accompanied by audio from a radio scanner allegedly recorded during protests in Echo Park Lake. “This is nazi shit,” the tweet said.

In the video, two people appear to discuss the protesters below as they fly over the area.

“Great when they put the fuel dumps on these helicopters,” one man says. “I would have dumped it on Glendale Boulevard a long time ago.”

There’s laughing in the background as the men joke about setting the area on fire.

Officials for the LAPD, however, deny that the men in the clip are police officers in its department.

“It has been confirmed that they are NOT employees of the LAPD,” Captain Stacy Spell said in a video posted to Twitter on Thursday. Some commenters suggested that news crew members, not police officers, made the comments on the air.

Police were in Echo Park Lake on Thursday night to remove a homeless encampment in the area. Officers said they offered unhoused people rooms in downtown hotels.

As helicopters circled overhead, one person spoke over a megaphone alerting residents that anyone who remained in the enclosed area of the park would be subject to arrest, according to the Los Angeles Times.

More than 150 people showed up at the protest to support unhoused people’s right to camp in the park and encourage the city to handle the homeless situation productively. The protesters were met with a large force of LAPD in riot gear.

Users on Twitter were appalled by the video and audio of the helicopter crew members. Many believed that despite the department’s statement, the voices were those of police officers.

Other commenters criticized the police’s efforts to remove unhoused people from the park.

“This was handled poorly,” one user tweeted. “The irony of needing to displace those without homes in order to do a $600k upgrade to the park. Use the money to help people get on their feet.”

Protesters said online that their peaceful congregation was met with violence and guns drawn by the police. One protester showed pictures of his arm that he said was broken during the protest.

“Can confirm that a baton-wielding cop broke my arm last night,” the user tweeted.