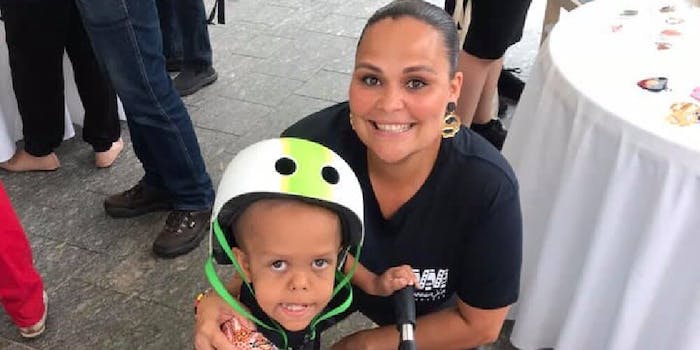 'This is what bullying does.'

A mother in Australia is begging for anti-bullying measures after her 9-year-old son threatening suicide because he was bullied at school.

In a grueling six-minute video, Yarraka Bayles’ 9-year-old son is seen crying in the car and asking for a knife. He was diagnosed with achondroplasia, a form of dwarfism, within days after he was born, News.com.au reported.

Bayles uploaded the video to Facebook on Wednesday, and it has since received more than 20 million views and been shared hundreds of thousands of times around the world.

“Now I’ve just picked my son up from school, witnessed a bullying episode, ringed the principal and I want people to know, parents, educators, teachers—this is what bullying does,” Bayles says in the clip.

The boy cries over his mother’s voice, “Give me a knife, I’m going to kill myself.”

“So can you please educate your children?” Bayles continues. “Your family, your friends? Because all it takes is one more instant, and you wonder why our kids are killing themselves.”

“Give me a knife now,” says the boy, continuing to sob. “I could just stab myself.”

Bayles says, “And this is the impact bullying has on a 9-year-old kid that just wants to go to school, get an education and have fun, and every single freaking day, something happens.”

Throughout the video, she asks what’s being done to raise awareness about disability issues in schools and if other parents have advice.

The boy is then seen clutching himself and crying. His mother starts to sob as she says, “And I want people to know how much it is hurting us as a family. I want people to educate their children, the whole anti-bullying shit isn’t fucking working.”

Since the video was shared, her son has received millions of words of support and encouragement from people around the world. Some have shared photos of their own child with dwarfism to remind him he is not alone.

“Heartbreaking watching this. Keep ya head up my lil bra, your stronger then that,” wrote one person on Facebook. “People need to be held accountable for this, not good enough.”

Many advised her to take the issue to the school. It’s not clear which school he attends or if school officials have been approached about the issue. Bayles did not respond to the Daily Dot’s request for comments.

A man named Brad Williams started a GoFundMe to bring the boy and his mother to Disneyland in the U.S. In just a day, the fundraiser raised more than $268,000.

“This isn’t just for [him], this is for anyone who has been bullied in their lives and told they weren’t good enough,” Williams wrote in the post, adding that he’s in touch with Bayles. “Let’s show [him] and others, that there is good in the world and they are worthy of it.”

Actor Hugh Jackman sent a message to the boy. “You’re stronger than you know, mate,” he said. “And no matter what, you’ll always have a friend in me.”

Update, Feb. 21, 7 p.m. CT: Later on Friday, there were claims made on social media, such as a YouTube video, that claimed that the child and his mother are “scam” artists, who dredge money out of well-meaning people. The YouTube video shared no evidence to validate the claim and only included cherry-picked information from an Instagram account affiliated with the boy.

Fact-checking website Snopes has dismissed the claims as “false,” stating that they could not establish any facts that would validate the claims made by the YouTube channel.

His family, however, has been in the limelight before. Bayles herself manages “Stand Tall 4 Dwarfism” an anti-discrimination advocacy platform supporting those with dwarfism. In 2015, they appeared on “Living Black SBS,” a program focusing on indigenous communities in Australia.

Following these scam claims, however, many were quick to leave abusive comments on his Instagram photos, reiterating some of the bullying about his height and his facial appearance.