A photo from the camera has been shared by thousands of people, but the owner hasn't yet come forward. What can you say about the Dutch that hasn’t already been said? They’re cheerful. They’re kind. They’re determined to give back what’s not rightfully theirs.

The latter is at least true in the case of a lost red Nikon Coolpix camera, one that turned up on the streets of Amsterdam on June 20 and has yet to make its way back to its rightful owner. The camera contained more than 2,800 photos, many of which detailed a month-and-a-half long trip through Europe, like this one of the camera’s owner and a friend standing on bikes near an Amsterdam canal. 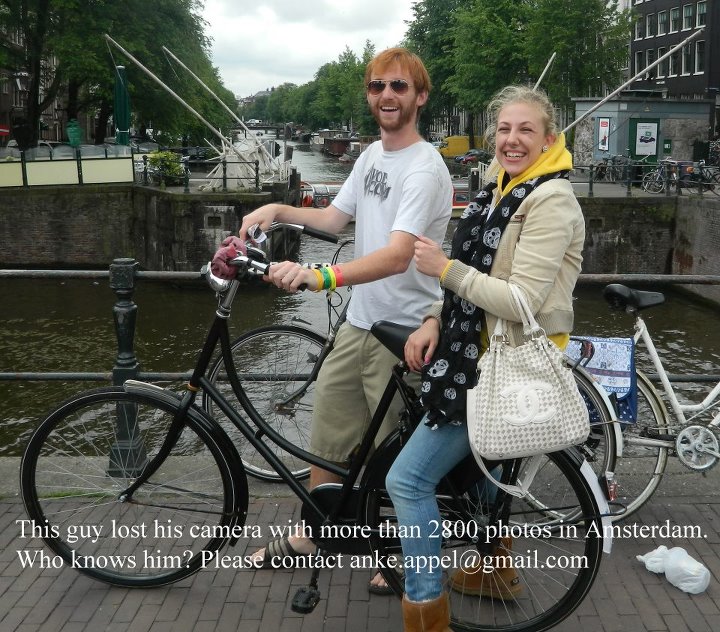 On Monday, Roland van Gogh of nearby Culemberg posted a photo from the camera onto Facebook in hopes that the owner of the camera might come forward to claim it.

“We would like to give him back the camera and the photos. Please Like, Share and spread this photo around so we can give him back his camera!”

Van Gogh’s post immediately started making its way through Facebook circles, receiving over 10,000 shares in its first 10 hours on the site. The photo’s range has only picked up since then. After 12 hours, nearly 17,000 people have shared it.

No word yet on whether the camera has been reunited with its owner, but van Gogh’s optimistic that Facebook should help forge the union. In a comment left on the post, he wrote that he and his wife have a lead to the woman in the photo.

“Hope she sends a reply soon!” he wrote.