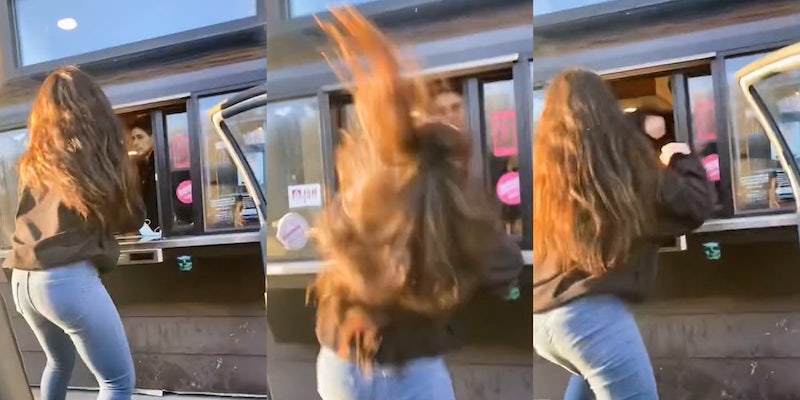 ‘Don’t mess with the ppl that serve ur food’: Dunkin’ worker appears to punch girl in the drive-thru, sparking debate

'She just warmed herself up to get embarrassed.'

In the wake of the pandemic, drive-thrus reportedly became “slower, less accurate, [and] less friendly.” This is mostly due to staff shortages many restaurants and food service industries are experiencing, and it has the potential to lead to conflict between customers and workers.

Such conflict was featured in a video uploaded by Illinois-based TikToker @didi_cortes, who has nearly 300,000 followers. In it, a girl is outside of her car, performing a series of gesticulations before squaring up to the Dunkin’ worker working the drive-thru.

He punches her in her face.

The people sitting in a car, who are the ones filming, gasp.

“He said equal rights, equal fights,” @didi_cortes captioned the clip, which was viewed over 22.4 million times.

The video is potentially staged, however. The TikToker indicated the worker is her brother in a hashtag included in the caption, and her account features entertaining content.

Some viewers noted the worker appears to be her brother. “That’s her brother guys, they just playin,” one said.

Others used the video as an example of why one should not treat workers in the food service industry, which is still suffering from severe understaffing in 2022, poorly.

“Stop testing patience of the people who work at food sectors. They are underpaid but the level of work is unexplainable,” a viewer pointed out.

Many also found the video to be humorous.

“She just warmed herself up to get embarrassed hahaha,” one laughed.

“The collective gasp as the head flies back is really what’s getting me,” another said.

The TikToker confirmed she’s “good” in a follow-up video.

Responding to a commenter who said they would “love” to see the girl’s face after the punch, the TikToker filmed herself, appearing unscathed.

So it appears very likely the video was staged.