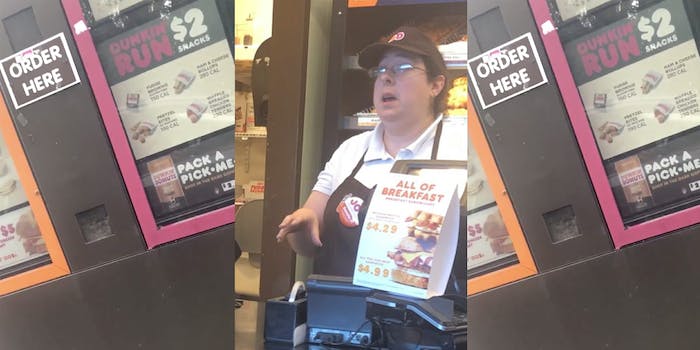 The woman was issued a no-trespassing notice.

A young woman says she was speaking Somali with her family at a Dunkin’ drive-thru in Portland, Maine, when an employee at the coffee franchise refused to serve her and then called the police.

The woman, 20-year-old student and activist Hamdia Ahmed, told NBC News that she was waiting with her family in the car, and the employee asked her and her family to stop yelling over the speaker.

“We were just speaking in our native language,” Ahmed told the news outlet. “We weren’t yelling.”

She then began recording.

“You’re going to disrespect me cause I speak a different language than you,” Ahmed says to the employee in the video, which she posted to Twitter. “Is that what it is?”

The employee responds: “You can leave. I don’t want to hear it. I’m done with it. You can leave or I will call the cops.”

According to NBC News, Ahmed went inside the store to speak with the employee. Police arrived minutes later and issued her a trespassing notice for “disturbance” and “yelling at staff” that banned her from the Dunkin’ location for one year.

Ahmed said the store owner’s, Dave DeRosa, lifted the ban and met with her family on Wednesday. In a statement to NBC News, Dunkin’ said DeRosa “sincerely apologized to her for the poor experience and is working on providing additional customer service training to his store crew.”

“I’m proud of myself for speaking up against this because it’s not right,” Ahmed said. “My family did not deserve to be treated that way, and I hope I started a conversation about why the police are called on Black people for no reason.”