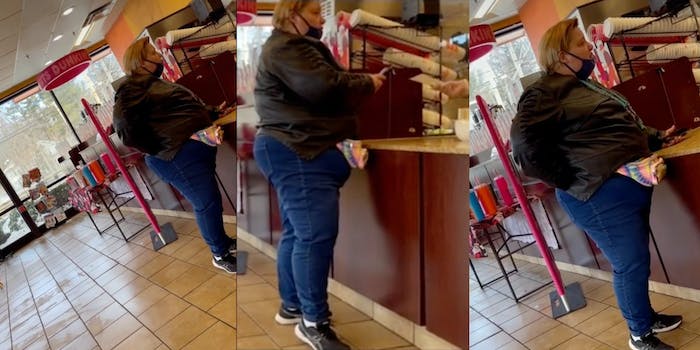 ‘That’s what a dozen is’: Dunkin’ Donuts ‘Karen’ baffles employee when she orders 50 Munchkins

A new viral TikTok shows a “Karen” raising hell at a Dunkin’ Donuts after ordering a “dozen” Munchkins and then getting upset when she doesn’t receive 50.

The video, uploaded by user @princess__natt, shows Karen—colorful fanny pack on her waist, mask situated uselessly around her chin—making her demand known to the Dunkin’ employee: “More.”

“I need more,” Karen tells the flustered employee behind the counter. “Fifty. Five-zero.”

Then Karen delivers the best, and most talked-about, line of the video: “That’s what a dozen is. Not 12.”

Viewers could not stop talking about Karen’s belligerent certainty that a dozen meant 50.

Following multiple requests from viewers, @princess__natt uploaded a part two. She explained that Karen “disrespected the woman at the cashier” but the Dunkin’ employees were still kind enough to help her.

Karen continues to act aggravated in the second video. Mask still around her chin, she accuses the employee of not understanding English, despite her own apparently loose grasp on elementary math.

As many viewers pointed out, the cashier did not appear to have any trouble understanding Karen. She was just rightfully baffled by the woman’s claim that a dozen equals 50.

Karen finally adjusts her mask near the end of the second video—but not until she’s finished leaning over the counter and then stepping back and away from other people. Viewers were torn between ripping the woman for her disrespectful attitude, her terrible mask use, and her atrocious math skills. For the most part, they chose all three.

One commenter asked the question that the impossibly polite employee likely wished she could have: “Sorry I understand English but do you understand math?”