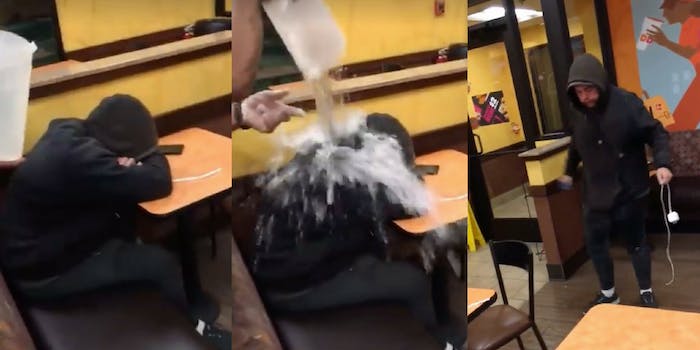 There's no reason to treat people experiencing homelessness like this.

Dunkin’ Donuts is apologizing after employees were captured in a viral video throwing a pitcher of water onto a homeless man sleeping in their store and laughing at him.

The video, uploaded to Facebook by user Samuel Breazeale on Sunday, shows an employee dumping a pitcher of water onto the man, who is sitting at a table and resting his head on his arms, which are folded on the tabletop. A second person laughs at him as the man gets up, grabs his phone charger and phone, and tries to shake the water off his phone.

“How many times I’ve got to tell you to stop sleeping in here,” the employee says as another person laughs. “You’re here all day.”

The man then tells the employee that he fell asleep on accident, to which the employee says it wasn’t an accident. The employee tells the man that he won’t call the cops as him as the person recording the video begins laughing again.

“That poor guy. You never know what someone is going through in life!!!” Breazeale wrote on Facebook, identifying the store as a location in Syracuse, New York, before including a crowdfunding link for the man. “This shouldn’t happen to people. No one deserves to go through this in life. Here’s a go fund me of $150 to get him a new set of clothes and a meal and phone charger!!!”

According to Syracuse.com, the man who had water dumped on him is Jeremy Dufresne, and he had dozed off while charging his phone so that he could call his mother. Dufresne is diagnosed with schizophrenia, epilepsy, and learning disabilities, his family told the publication, and he prefers to live outside, alone, despite being offered help from his mother and aunt.

“He probably had some personal problems of his own and needed someone to talk to,” Dufresne told the publication of the man who poured the water on him. “And he took it out on someone else, like me.”

Breazeale’s video of Dufresne having water dumped on him has since gone viral, garnering more than 2 million views, 40,000 shares, 22,000 reactions, and 17,000 comments. Several commenters have wished that the employees behind the video were fired, while others have asked about protests against this kind of treatment of homeless people.

According to the publication, Dunkin’ Donuts has fired the employees who dumped water on Dufresne and has apologized for their behavior, stating it goes against the company’s “core values.” The company also stated that it’s reaching out to Dufresne to personally apologize, and to work with local advocates to educate its employees on working with homeless people.

Meanwhile, homeless advocate Al-amin Muhammad, who runs the outreach program “We Rise About the Streets,” launched a protest against Dufresne’s treatment. Breazeale, who posted the video, is also working with Dufresne’s brother and mother in order to help transfer the more than $8,000 raised for Dufresne via GoFundMe.

Additionally, Onondaga County District Attorney William Fitzpatrick told Syracuse.com that his office is figuring out if it should charge the people who dumped the water on Dufresne. They could be charged with harassment, but Fitzpatrick is waiting for Dufresne’s call on what he wants.

The video of Dufresne getting water dumped on him comes weeks after a man in New York recorded another viral video involving a homeless man, in which the man was shaving while riding the New Jersey transit train. The man had spent some time at a homeless shelter before reaching out to a brother to pay for his train ticket to visit their other brother, and said he was shaving so that he didn’t look like he had been homeless.

“Let’s not allow this to become the norm—that’s the way we treat homeless people,” Fitzpatrick, the district attorney, said.