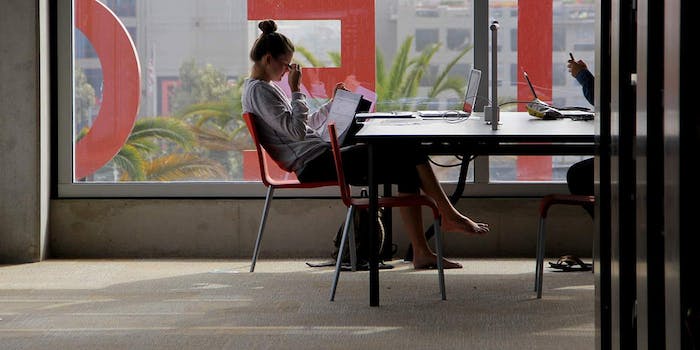 Lauren* (a pseudonym) is a first-year student, gender studies major, college Republican, and aspiring lawyer at Duke University. She’s also an adult performer who started shooting adult movies as a way to supplement her $60,000-a-year college tuition. And she wants you to know that she doesn’t care what you think about her chosen career path.

After experiencing months of online harassment on campus, where her identity was exposed by a fraternity brother, Lauren came forward with her story in a first-person essay on xoJane last week, defending her decision to shoot pornography while getting her undergraduate degree at Duke.

“For me, shooting pornography brings me unimaginable joy. When I finish a scene, I know that I have done so and completed an honest day’s work. It is my artistic outlet: my love, my happiness, my home,” she wrote. “It is the exact opposite of the culture of slut-shaming and rape apology which I have experienced from certain dark corners of the Internet since being recognized on campus a few months ago.”

Over the last few weeks, the Duke campus and the anonymous college gossip website CollegiateACB were abuzz with news of Lauren’s chosen career.

Hey this is the girl you’re talking about. If you actually asked me about my story, you would know I did it because I needed to pay tuition and didn’t want to go into debt to do so, and I very much enjoy doing it. And as far as making fun of me for being a feminist: I plan to use my experiences to someday be an activist for sex workers. You guys are horrible fucking people. Get a life beyond harassing me from the comfort of your computer screen.

“I’d rather have my dignity and loans than work as a prostitute,” a student responded. “I’m sure Daddy’s proud.”

The desperate justifications and delusions of the individuals in this thread rushing to support the objectively sad and degrading existence this girl leads is quite honestly frightening. This girl needs help not encouragement.

Of course, considering the longstanding cultural stigma and discrimination against sex workers, the attacks on Lauren weren’t particularly surprising. Add to that the fact that Duke is a notoriously politically conservative campus with a demonstrated history of sexism and hostility towards sexually active women. There are also no legal protections for sex workers who are confronted with discrimination, making them particularly vulnerable to abuse and harassment.

Cynthia Clinton, director of harassment prevention at Duke’s Office for Institutional Equity, which aims to enhance “respectful, diverse and inclusive work and learning environments for the Duke Community,” provided a statement:

It is the practice of our office to refrain from commenting on individual matters. Our policies apply to all members of the Duke community and are intended to support and sustain an environment of equity, respect and inclusion.

Although Lauren received the support of the Duke administration, she had little recourse for fighting back against anonymous cyberbullies. So she decided to bring her story from the shadowy corners of anonymous message boards into the forefront, speaking with a reporter from the Duke Chronicle. But Lauren objected to the reporter’s characterization of her as “naive” and attention-hungry, disputing anecdotes that she showed off her designer purses during the interview and asked if she thought her story would end up on Ellen. So she took to the Internet to reclaim her voice, writing an essay for xoJane and granting an interview with Fusion last week.

After the xoJane story went viral, Lauren received an outpouring of support from the Internet, as well as from people in the adult industry:

A must read! https://t.co/tn87NGcOUZ Thank you @xojanedotcom for publishing such a compelling article. Kudos to the author

I wish I knew her. Maybe I do. https://t.co/BoUANcPC9d

To all the haters: https://t.co/LxQTMvHU1A

With this newfound support from all corners of the globe, Lauren should parlay the support into a platform as a spokesperson for the adult industry in the classroom, says Tasha Reign, an adult performer who is currently enrolled as an undergraduate at UCLA (like Lauren, she majors in gender studies, with a minor in theatre arts). While Reign says her academic studies and her career have complemented each other fairly well, she uses her role in the classroom as an opportunity to advocate for a perspective outside the standard curriculum, which she says tends to be fairly sex-negative when it comes to discussing sex work.

“If [Lauren is] in the classroom and there’s a lesson she sees from a different point of view because she’s experienced what it’s like to be on set firsthand or what her job consists of, and she thinks there’s an error in what her teacher is saying, she should stand up and speak her mind like I do,” says Reign. “She can also bring any buzz she’s getting right now and use it to bring awareness to her position as a performer and a student at Duke University and to the discrimination against her.”

Thankfully, Reign says, she hasn’t been discriminated against or harassed as Lauren has on campus: “L.A. is pretty open-minded about adult entertainment and at UCLA I’m very celebrated,” she says. “I can’t even imagine going to a school like Duke that has a more conservative attitude [toward sex work].”

Lauren plans to continue her career as a student, while simultaneously flying to California’s San Fernando Valley to do shoots. But, Reign says, balancing the two won’t necessarily be easy: It’s taken Reign six years to get her bachelor’s (she currently is two credits shy of a degree, which she’ll complete this semester), and while girls who fly back and forth to do shoots and attend school “make it work,” competition for work is so cutthroat that girls who aren’t based in L.A. often miss out on opportunities for last-minute bookings. Lauren’s main hurdle, however, Reign says, will be withstanding the barrage of criticism and harassment directed at adult performers on a daily basis.

“Being in the adult industry, you build a backbone and become really opinionated and stronger in your convictions, or else you just leave,” says Reign. “She [Lauren] is an educated, smart woman, and I’m sure she’ll realize that people have negative opinions about everything you do, whether you’re a lawyer or a school teacher or a housekeeper. Our job just happens to be a lot more controversial.”