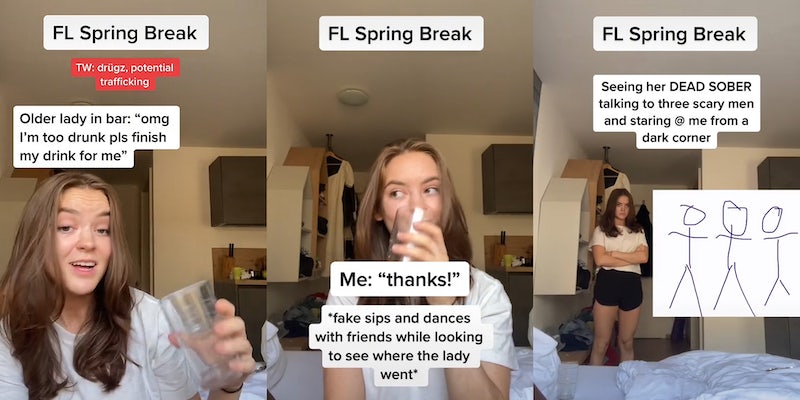 ‘Watch your drink. Period’: TikToker claims she almost got trafficked with a drugged drink while on spring break

'I've had this happen to my wife.'

A woman went viral on TikTok with a video claiming she was almost drugged and trafficked in Florida during spring break.

User @itsthecealion posts a 14-second clip recreating the experience. The overlay reads, “Older lady in a bar: omg I’m too drunk pls finish my drink for me.” Which the relay replies: “Me: thanks.’” The TikToker said she continued to dance and pretends to take a sip from the drink, searching for the lady. That’s when the TikToker says she noticed that the lady was completely sober, talking to three scary men while staring at her in a dark corner.

@itsthecealion warns in the caption, “A friendly reminder to NEVER accept free drinks from strangers if you didn’t watch the bartenders make it themselves,” with hashtags about trafficking.

@itsthecealion A friendly reminder to NEVER accept free drinks from strangers if you didn’t watch the bartenders make it themselves #humantraffickingawareness #menarescary #criminalminds ♬ The Bad Version – Em T.

The video has been viewed over 244,000 times since it was posted on Tuesday. The TikToker shared more in the comments about the experience and why she took the drink.

“Before anyone asks I took the drink in the first place because I’d rather she give it to me than someone who might have actually drank it,” she stated, “ I eventually took the drink to the bartender and was like pls pour this out I think it’s drugged. And when that happened they disappeared.”

Many people in the comments expressed their support for the TikToker

“Not all heroine’s wear capes, im glad that you were smart enough to not drink it, and prevent someone else from potentially drinking it,” one person said.

Others shared their experiences with being drugged.

“I’ve had this happen to my wife. my reaction is to instantly snap a pic of the person and go to the bartender. she is on board to pretend to take the drink,” one shared, “we tag team it so that they don’t give it to someone who will willingly take it. it’s happened 4 times over the years.”

“Trick question one time the bartender did roofie me so just watch your drink period,” a second said.

Human trafficking is defined as modern-day slavery where the victim is exploited. According to the Department of State, human trafficking is very common: there are approximately 24.9 million victims worldwide, of different ages and backgrounds. The perpetrators can be someone close like a family member, significant other, or a friend. Others can be strangers or acquaintances.

While determining whether a drink is spiked can be difficult, there are indicators. Some of the signs of a drugged drink are dust or flecks on the ice. Other indicators include cloudiness, change of color, or excessive bubbles. Ways to prevent this from happening are watching the bartender make your drink, don’t accept beverages from strangers, keeping your eyes peeled for suspicious behavior, reporting suspicious behavior to the staff, sharing your location with loved ones before going out, and leaving the situation if it makes you uncomfortable, but there are no guarantees.