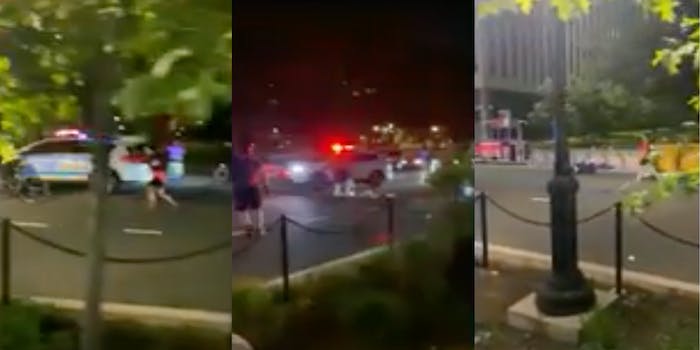 "He, not his legacy, should live on today."

A video of a New York Police Department vehicle side sweeping a protester on a bike on Tuesday has been widely shared online. The police driver was pursuing a Volkswagen sedan that had injured two protesters moments before, according to the New York Post.

The incident comes one year after George Floyd’s murder. Protesters marched on the Brooklyn Bridge in New York City for the one-year anniversary of his death, carrying signs and raised fists.

Rep. Hakeem Jeffries (D.-N.Y.), Rev. Al Sharpton, and New York City Mayor Bill de Blasio kneeled for more than nine minutes in honor of George Floyd and voiced the need for the George Floyd Justice and Policing Act to pass in the Senate. The bill would limit the use of force and restrict the use of no-knock warrants, chokeholds, and carotid holds amongst other law enforcement accountability practices.

According to the New York Post, approximately 30 bicyclists had been riding in tribute to George Floyd when a sedan “aggressively” forced its way through the protestors. One person allegedly jumped onto the hood of the car and held on for at least five blocks, according to the NYPD. As the car drove away, the car hit another 39-year-old protester.

The video captures the next moment as a NYPD vehicle chased after the sedan. Screams and a police siren can be heard before the video shows the NYPD vehicle accelerating, hitting a bicyclist with its side-view mirror and causing the biker to fall over.

The three injured protestors refused medical attention at the scene, according to the NYPD, and the driver was arrested and is awaiting charges. Potential charges include reckless endangerment and leaving the scene of an accident.

Using the hashtag #GeorgeFloydAnniversary, people online used the anniversary of his death to reflect on the changes still needed to create a more equitable world.

“He, not his legacy, should live on today,” one user commented. “The only way forward is that we continue to do the work, struggle to shift our individual and societal consciousness towards humanity and justice.”