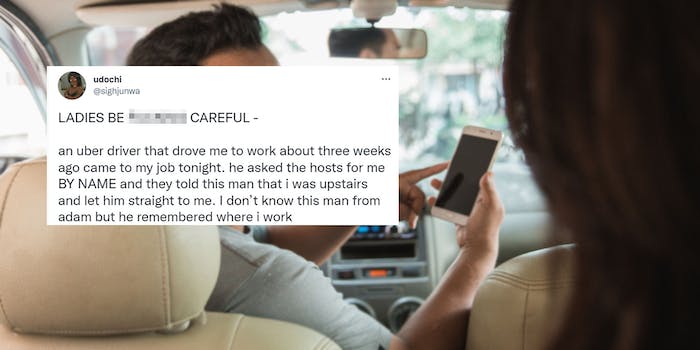 ‘There is no safe choice’: A woman took to Twitter to warn others after her Lyft driver showed up at her workplace

'Your coworkers should’ve [known] better than to lead him to you like that.'

In a viral Twitter thread, a woman wrote a warning to other ladies on May 19.

@sighjunwa wrote, “an uber driver that drove me to work about three weeks ago came to my job tonight. he asked the hosts for me BY NAME and they told this man that i was upstairs and let him straight to me. I don’t know this man from adam but he remembered where i work.” She corrected herself in the thread, noting the driver worked for Lyft rather than Uber.

Udochi claims the Lyft driver showed up at her job and asked for her by name. Once he found her, she claims he asked for her phone number and shares she had given the driver a fake number when she rode with him.

She tweeted, “this man has my work address, my home address, and my name but they refuse to even set a policy in place that doesn’t allow strangers to ask if you’re working and just be able to see you on a whim. so here i sit. trying to make my way home safely w a knife and maze.”

One user wrote, “I had a coworker who had a guy that kept calling the job every single day asking for her and I would NEVER say if she’s working or not. Your coworkers should’ve [known] better than to lead him to you like that. Nothing wrong with recognizing stranger danger for your peers.”

While others echoed, “woah i’ve never worked for a place that tells customers if someone’s working, they always say we can’t give that information, that’s a huge red flag on the company.”

Another tweeted, “when i worked at lush they had a policy about this for this exact reason. of course, management had like… one man and multiple women/femmes. every place should take those things into consideration bcuz unfortunately any service place ive been to after that hasn’t. im so sorry.”

The Daily Dot has reached out to Udochi via Twitter and Lyft via press email for comment on this story.