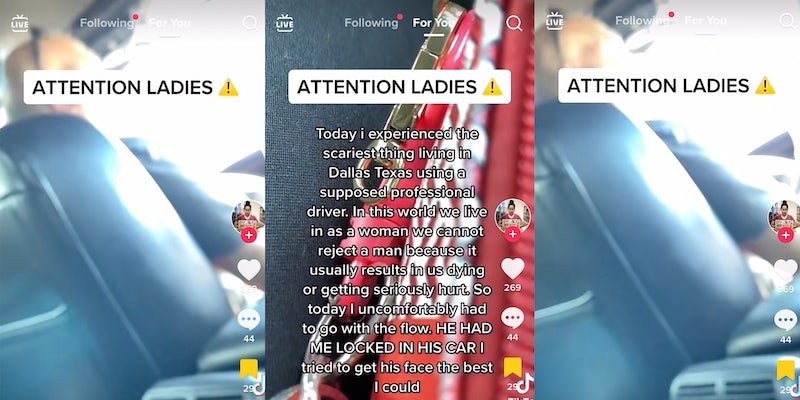 ‘I knew your heart was beating FAST’: Driver asks woman if her can give her oral sex, she uncomfortably ‘goes with the flow’ to avoid escalating situation

'It might not have been the right words to y'all, but I felt like it got me out the car.'

A TikToker filmed a professional driver asking her if he could perform oral sex on her. In response, she says had to “go with the flow” to avoid escalating the situation.

The video of the conversation with the driver was posted by @dysheannaa7. Her video has since been removed, but other TikTok users have reposted it.

In the video, the driver asks @dysheannaa7 what it would take for him to perform oral sex on her. In response, the TikToker says “uhhh, I don’t know” and asks him for clarification.

“Well, I have to go to work,” @dysheannaa7 tells the driver when he explains he would like to give her oral sex in a parking lot as soon as possible. He assures her it would only take five minutes, she says she has to “get ready for work.”

The driver says she doesn’t “have to do anything” and that he won’t force her. @dysheannaa7 reminds him that he has her number, so he can text her and that she will “let [him] know.” He says “if it’s not gonna happen now,” it won’t happen at all. He then asks her to show him her breasts to “prove” that she’ll let him perform oral sex on her at some point.

The two go back and forth about how much the driver would be willing to pay @dysheannaa7 to show him her breasts. Eventually, he says he will pay her $30.

In the video’s overlay text, @dysheannaa7 wrote that her interaction with the driver was the “scariest thing” and that the driver had locked her in the car during what is seen in the video.

“As women we cannot reject a man because it usually results in us dying or getting seriously hurt,” @dysheannaa7 wrote. “So today I uncomfortably had to go with the flow.”

On Sept. 27, @dysheannaa7 posted a TikTok announcing that her original video was removed by TikTok for violating its community guidelines—allegedly specifically to protect the driver’s “privacy.” She also said that she shared the driver and company’s information, which have also been “taken down.” The Daily Dot has reached out to TikTok via email.

In another follow-up TikTok, @dysheannaa7 says that she “said what [she] thought was best” to the driver for her own safety.

“It might not have been the right words to y’all, but I felt like it got me out the car,” the TikToker says.

She also shares that the driver attempted to drive away with her still in the car and took his seatbelt and turned around to look at her.

Many commenters on @dysheannaa7’s TikTok about her viral video being taken down urged her to post the driver’s information again. Commenters on her follow-up video applauded how she handled the situation.

“You handled it well,” @iyannnnnnnap commented. “I knew your heart was beating FAST.”

“You did what you had to do. Don’t let no one that wasn’t in your situation tell you what you should have done,” @woodie_woo5 wrote. “Glad you’re safe.”