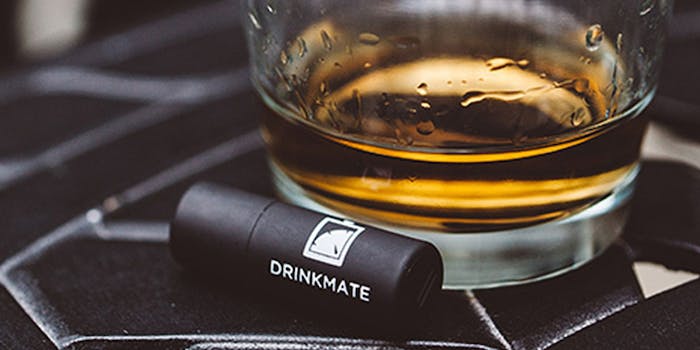 The world's smallest breathalyzer will make a big impact on a safer night out.

You’ve heard the dangers of getting behind the wheel after a big night out. But, depending on how much you’ve had, the reality is that you may still be under the influence the following morning.

It should be a no-brainer, but to make your decisions a bit clearer, the DrinkMate Breathalyzer puts blood-alcohol level (BAC) testing in your pocket. It connects to your smartphone to calculate the magnitude of your influence, and runs on power from your handset. So simple, even the inebriated could figure it out.

DrinkMate claims to be the world’s smallest breathalyzer, measuring less than two inches long. To take the test, users simply remove the cap and plug the breathalyzer into their smartphone.

The DrinkMate uses a custom semiconductor-based sensor to measure BAC, with the companion app displaying the reading. The breathalyzer is accurate to 0.01 percent BAC, and maxes out at 0.20 percent because, quite frankly, you shouldn’t be driving then anyway.

You can order the DrinkMate now via the Daily Dot store, priced at $31.99 for the iOS version, and $29.99 for the Android model. The deals take 20 and 25 percent off, respectively. Shipping is free to the U.S, but international shipping is also available.