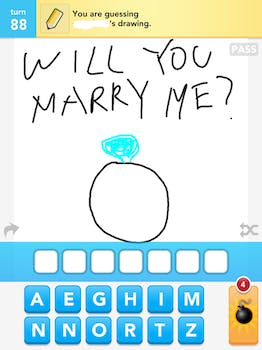 Here's the Draw Something image that sparked an engagement.

For when there are no words to express your love, there’s always Draw Something.

That’s a sentiment a Miller Samuel Appraisers employee learned firsthand this morning when she opened the popular social-drawing game to find that her boyfriend had penned an unexpected illustration.

At the bottom of the screen, the girl (whose identity is currently unknown) found a drawing of a ring with a blue diamond sitting at the top. Just above that read a simple message: “Will you marry me?”

According to Miller Samuel CEO Jonathan Miller, who tweeted the Draw Something screenshot to his 6,123 followers, the lucky lady said “Yes,” and the engagement is on.

No telling how she accepted, however. In setting up the Draw Something image, the boyfriend forgot to include the letters “Y” and “S.” Oddly enough, the letters “N” and “O” made the cut.

Now, can somebody draw up the perfect wedding band, please?

Photo via Draw Something