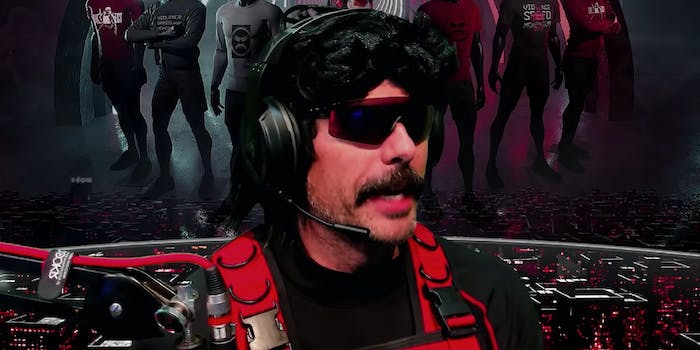 In the last few minutes of his final Twitch stream before his ban, Dr Disrespect's demeanor abruptly changes.

Dr Disrespect, whose real name is Herschel “Guy” Beahm IV, has been seemingly permanently banned from Twitch, and no one is really sure why.

Dr Disrespect’s ban comes amid a large wave of bans on streamers who have been accused of sexual assault. Some are speculating this is the reason for the gamer’s ban. However, the rumors are unconfirmed, and Dr Disrespect was not the subject of any public sexual misconduct claims this past week, according to Forbes.

Twitch told the Daily Dot Dr Disrespect violated the platform’s Community Guidelines or Terms of Service but would not confirm the specific reason for his ban.

“As is our process, we take appropriate action when we have evidence that a streamer has acted in violation of our Community Guidelines or Terms of Service. These apply to all streamers regardless of status or prominence in the community,” the Twitch spokesperson said in a statement.

Sources have confirmed to Rod “Slasher” Breslau, a credible esports insider who first reported on the ban on June 26, that the ban is permanent. It comes only a few months after he signed a multiyear deal with the platform.

Even though many streamers have also recently been hit with DMCA complaints, sources have also told Slasher that the ban is not related to DMCA. Slasher fueled speculation surrounding the ban by tweeting that he knows why Dr Disrespect was banned but wasn’t comfortable with sharing that information.

“Look: for several hours now I have been told from credible sources the reason DrDisrespect has been banned. however due to the importance and sensitivity around the subject I have refrained from going on it. i don’t feel comfortable with it currently,” Slasher wrote.

Another streamer, ShannonZKiller, claimed to also know the reason for the ban, stating Dr Disrespect was done “not just on Twitch” in a since-deleted tweet, according to Forbes.

It is assumed Dr Disrespect’s ban is permanent as Twitch is issuing refunds for subscriptions to his channel, and his emotes are gone, according to Dexerto.

People online began dissecting Dr Disrespect’s last stream. In the last few minutes of his stream, Dr Disrespect’s demeanor abruptly changes. People think this happened after he reads something, possibly on his phone.

And, as when any streamer gets hit with a ban, many began calling on Twitch to also ban Alinity Divine. Though, some are defending Alinity this time around as Dr Disrespect’s ban seems to be the result of something extremely serious, possibly criminal.

In 2019, Dr Disrespect was banned for two-weeks after live-streaming in the men’s public restroom at the E3 conference.