Clothing company for people with Down syndrome gets a Kickstarter boost

One grandmother's special clothing company is getting even bigger.

For the last four years, Karen Bowersox has been trying to make a difference for people who have Down syndrome through fashion.

Her efforts started when she noticed how hard it was for her granddaughter Maggie to find clothes that fit her unique body shape. Maggie’s struggle inspired Bowersox to create her own fashion company called Downs Designs, which sells custom jeans to those with Down syndrome.

Now Bowersox is hoping to expand her efforts and increase awareness with the help of a Kickstarter campaign.

“Kickstarter is a wonderful place for small businesses like mine to get financial support from the public. It’s nearly impossible to get financing or find an investor for a business like mine because my service is so unique and my market is very small,” Bowersox told the Daily Dot.

The crowdfunding campaign has already exceeded its initial goal of $5,000 and has raised more than $7,200 with the help of 53 backers. At this amount, the company plans to create Down syndrome awareness T-shirts and hopes to expand fashion options with stretch goals. The stretch goals are significantly higher, with the first to create casual shorts at $55,000. In addition to casual shorts, other stretch goals hope to enable Downs Designs to create black dress pants and increase the number of jeans styles offered. 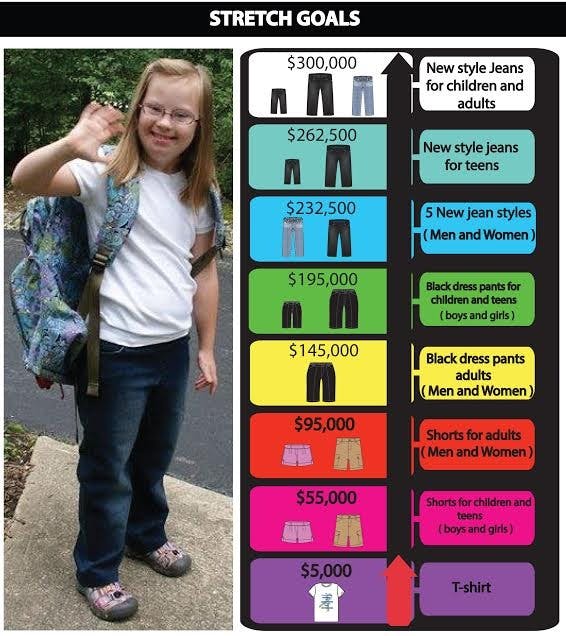 The pants and shorts will be in the same style as Downs Designs’ current jeans in that they will feature elastic waists, making them easier for people with dexterity limitations to take on or off without having to fumble with buttons and zippers.

Bowersox would love to add a few more options to her company that are particularly hard for people with Down syndrome to buy, like dress shirts, coats, dresses, khakis, and skirts. She hopes the Kickstarter campaign can be a turning point for the company. According to Bowersox, Downs Designs goes way beyond just providing clothing options.

“They give the wearer confidence in appearance, improve self esteem, and empower independence,” she said. “One mother from the U.K. told me that her daughter is now more aware of her appearance every day since wearing our jeans, has concern for her hair, and tries to coordinate her clothing colors. Another mother shared that her daughter wears braces from the knees down and the pants she had been forced to wear constricted her walking. She told me that since she is wearing our Downs Designs jeans, she walks with a happy gait, she stands up straighter and has a smile of confidence that she never had before. Who would have thought that a pair of jeans would make such a difference in someone’s life?”