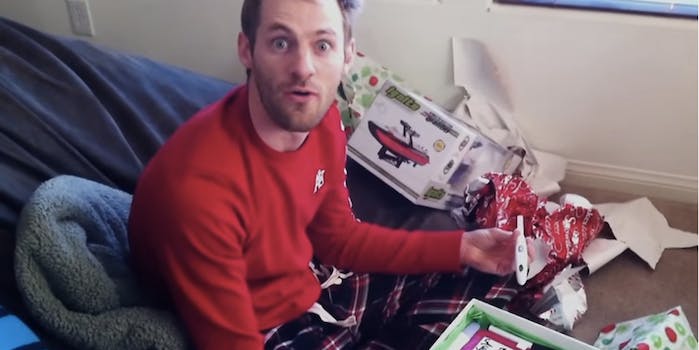 Will Dove ever release an ad campaign that has anything to do with selling soap?

There’s a new Dove ad out just in time for Father’s Day, and much like its Real Beauty campaign videos, it may leave you scratching your head and asking what the hell this has to do with soap.

The video, “First Fatherhood Moments,” is a montage of home movies of men finding out they’re going to be dads.

In general, pregnancy reveals tend to be played either for tender or comic effect. Unsurprisingly, Dove’s montage opts for the tender route. But then the clip ends with this inexplicable message: “Real strength means showing you care, even from the very first moment.”

Sure, these dads are tender and emotional. But are they really demonstrating anything beyond a basic human reaction to finding out you and your partner are about to bring forth new life?

Back in January, Dove released a similar video as part of the same campaign, which depicted children of various ages calling for their dads and the dads playing with their the children. Much like the “First Fatherhood Moments” video, the clip is moving, but the dads are also largely passive participants. They’re not really doing anything to demonstrate their paternal skills, other than just, like, being there.

While the videos are sweet, they have little to say about the realities of being a father, or a man for that matter. Dove, however, seems hell-bent on creating a dialogue about fatherhood and what it means to be a hashtag #real man. The company has prompted people to share their thoughts on Twitter.

At least a few people on Twitter have responded positively to the ads.

I love that dads aren't being lumped into emotionless dullard territory so common in advertising. @DoveMenCare https://t.co/IdQTNgGHiC

Some, however, aren’t convinced.