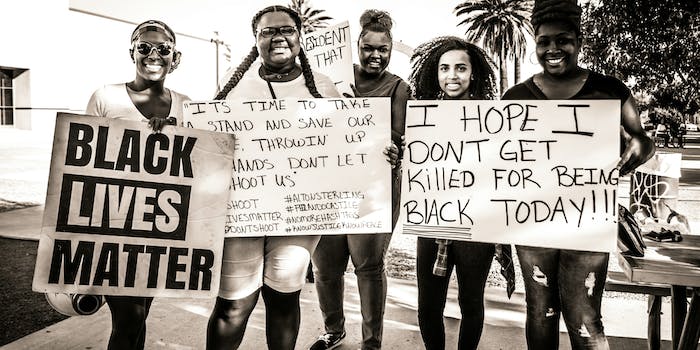 It's time to listen to the Black community, Democrats.

Who swayed the election for Doug Jones against disgraced former judge Roy Moore? If you ask FiveThirtyEight, the answer is obvious: Black voters.

“[Alabama] Democrats have tended to do their best in two types of places: counties where a large share of the population is black and cities,” Harry Enten wrote in a pre-election primer. “But to win the Alabama Senate race… he’ll probably need to run up even larger margins than normal in the black belt and win handily in counties with significant population centers.”

The Black Belt refers to a horizontal region across Alabama’s southern half, running west to east from Sumter and Choctaw all the way to Russell and Barbour counties. As it turns out, Jones performed extremely well throughout the Black Belt. An overview from election night provided by the New York Times reveals that almost every Black Belt county turned blue for Jones, with many nearby counties also voting in Jones. In short, Black voters are the main reason why Jones is the first Democrat elected to serve in the U.S. Senate from Alabama in 25 years.

Statistics from the Washington Post stress the point. According to several charts breaking down the special election’s exit polls, 96 percent of Black voters went with Jones, while only 30 percent of white Alabamians voted for him. Particularly, 98 percent of all Black women who voted for Jones.

Black women deserve praise in election. No need to convince us how to vote – especially if morality, ethics, and law is involved. We know what's good. #AlabamaSenateElection #AlabamaSenate #BlackWomen pic.twitter.com/fdLh55RzJp

Meanwhile, white men and women voted similarly to one another: 72 percent of the former supported Moore, and only 34 percent of the latter voted for Jones. That means white women voted based on their race first and their gender second. Even college-educated white women would rather elect a white man who is an alleged child predator than a Democratic candidate with a civil rights track record.

Twenty-nine percent of all voters were Black, and most turned out in support of Jones over Moore. Their contributions literally gave Jones the election, and that’s a message that every Democrat should be studying closely. Because Alabama isn’t an outlier case, and as any Democrat who followed President Obama’s 2008 and 2012 elections will tell you, Black voters have much more power than the Democrats give them credit for.

2008 was a magical year to be alive, and 2012 carried a similar spirit along with it. Voter turnout was unprecedented in both years’ presidential elections for one simple reason: Obama. He was a shining hope for many, a sign that, if (re)elected, he could prove America could have a Black president that actually understands how Black Americans live and relate to the country. Black constituents came out in droves to vote for Obama, and the former president has them to thank, in part, for his two terms.

Back in 2008, Politico published an exit poll analysis detailing how Obama won the presidential election. And there’s some striking similarities between Obama’s election and Doug Jones’ win. According to that report, Black voters increased by 2 percent when Obama ran for office, and 96 percent of all Black voters cast their ballot for him, with Black women more likely to vote than Black men. CNN reports that 13 percent of the presidential vote was from Black constituents, too.

In comparison, Hillary Clinton’s hold on Black voters in 2016 just wasn’t the same as Obama’s. She gained 89 percent of the Black vote, and only 12 percent of all voters were Black, signaling a 1 percent drop between 2012 and 2016. Those numbers may sound minuscule on the national stage, but it’s clear why Clinton’s numbers fell. She wasn’t putting Black voters’ needs first. And her husband’s fight with #BlackLivesMatter certainly didn’t help Black voters trust the Clinton’s in the White House, either.

“Running against President Donald Trump is not a political strategy,” Bitch Media senior editor Evette Dionne told the Daily Dot. “Liberal Black voters want and need to know the Democratic Party are championing the issues that will improve our communities, such as working to dismantle the prison-industrial complex, tackling gerrymandering and voter disenfranchisement, and confronting the racial wage gap, which contributes to the lack of wealth in communities of color and LGBTQ communities.”

"A lot of this is 'hooray black women,' but after the election, go back to being in your place." @freeblackgirl explains that black women need support to run for office. #AM2DM pic.twitter.com/CYOgheFCAp

I love that #BlackWomen is trending on Twitter. Will people actually invest their resources in Black women? Will organizations and venture capitalists and businesses help Black women launch our own businesses? Help us run for office? Actually listen to us when we speak?

But more often than not, Black politicians aren’t given the opportunities, connections, and resources that they need to run for office, and Black women, in particular, remain one of the most underrepresented groups in Congress. It’s almost as if the Democratic Party puts white people first, Black voters second.

“Democrats don’t know what Black women as a voting bloc want or need, and I don’t know if they care enough to find out,” Dionne explained. “I think we’re re-entering a collective moment where Black people are also demanding political power and are exercising their agency as it relates to the candidates who will earn their support.”

Take Jim Webb, who ran during the Democratic presidential primaries and espoused a questionable stance on affirmative action. He also refused to acknowledge #BlackLivesMatter while his fellow candidates would say that Black lives do matter. As a result, he polled in the single digits, eventually dropping out early on.

In comparison, Sen. Bernie Sanders (D-Vt.) purposefully went out of his way to support #BlackLivesMatter after activists took him up on the task. And his good faith paid off. Sanders, who closely challenged Clinton for the presidential nomination, gained a 73 percent approval rating from Black Americans in comparison to only a 52 percent approval from white voters, the Washington Post reports. It’s safe to say we have Black voters to thank for pushing his progressive campaign into the mainstream.

But it’s not enough for Black voters to specifically support white candidates when the Democrats need their help. It’s time the Democrats give resources over to Black politicians—particularly Black women—to rebuild the party in a more inclusive direction from the inside.

“The party is happy to use the labor of Black women while ignoring their contributions to electing Democratic candidates for decades,” Black Girls Laughing podcast host Britney Hines told the Daily Dot. “Payment for our actions is simply backing Black women candidates when they raise their hand to run for office and denying them access to Democratic resources for careless reasons.”

Since #BlackWomen is trending, we'd like remind everyone that Black women face higher risks of pregnancy complications and maternal mortality. We can't just support Black women on Twitter; we must fight to provide all Black women with proper reproductive care. https://t.co/rFcSrLAbyh

Phenomenal #BlackWomen who run orgs that should get more funding:

Just look at the difference between Danica Roem and Andrea Jenkins, two transgender women who ran for the Virginia House of Delegates and Minneapolis City Council, respectively. Most Americans didn’t hear about the latter until after she was elected, whereas the former received significant media attention both before and after the election. That’s partly because Roem is a white trans woman and Jenkins is Black.

“The same way the media doesn’t report on Black kidnap victims, they ignore Black candidates,” Hines said. “The Democratic Party could combat this, if they provided media and financial support for the candidates.”

Ok #BlackWomen who’s running in 2018? If we’re gonna do this work, we need to start getting elected.

It’s clear that the Democratic Party has issues with Black voters and candidates. But Dionne and Hines stress there are steps Black voters and allies alike can take to fight the problem. Donating money is the biggest one: Building up a candidate’s funds can help lead the way to more exposure. Joining activist movements and spreading the word is a major step too, Hines explained. But even in small, everyday ways, people can help support Black politicians before they even become candidates—especially Black women, who need more support than ever before in the wake of Trump.

“If we’re in a position to help Black women harness the power of their voices, we should culturally provide that leg up,” Dionne told the Daily Dot. “If a Black girl is given space to speak in a classroom, it will give her the confidence and the leadership skills needed to eventually enter politics and feel confident in her chances of winning.”

When Black women are given the opportunity to grow, they soar. That means it’s time for Democrats to show support with their time, their labor, and their money. Otherwise, white politicians will continue to dominate U.S. politics, creating policies that benefit white citizens at Black Americans’ expense for years to come.