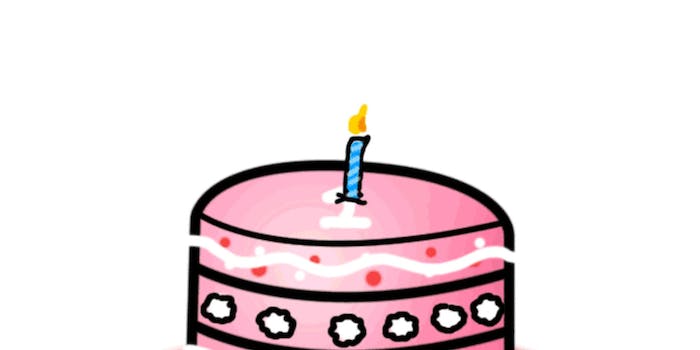 In the Daily Dot’s first year, the Web changed in profound and unexpected ways, ascending into pop culture like never before.

Quite a few sites have grown up. When we started working on the Daily Dot, Reddit seemed like the best place to cut our teeth. It was big enough—but still “small”—and it was clearly a cohesive community.

Now it’s in the top 150 sites on the Internet, and everyone who’s used Twitter has probably heard of Reddit.

Pinterest, which people were even less aware of a year ago, is now even bigger than Reddit, It’s top 50. And it’s even gone through evolutions as a community, starting out as a sort-of Lifetime Social Network but rapidly expanding its tent and adding a few rings to its circus.

Facebook, Twitter, and LinkedIn, once the Internet’s darlings, are now the old stand-bys. The first and last are even public companies now—so not Internet cool.

It was a year of spam, for one. Major, highly respected publications, including The Atlantic, were temporarily banned from Reddit for spamming. High-profile users were similarly banished for selling posts.

Over on Twitter, we’re a little more tolerant of spam, but there have been revelations about just how many of the biggest Twitter users are tweeting to a house full of empty seats.

A year ago, barely anyone had heard of a site called Pinterest. Now, it’s one of the biggest sites on the Internet, and it turns out, highly spammable.

It was a year of political radicalization. Last year, the U.S. signed Anti-Counterfeiting Trade Agreement (ACTA) with little to no fanfare. This January, however, when Congress proposed the Stop Online Piracy Act, the Internet revolted. People protested, the Internet went dark, and in the end, SOPA fell apart.

Since SOPA, PIPA, CISPA, and ACTA have all gone down in flames, we’ve seen a new political party, the Pirate Party, appear in the U.S. and become a real force in Europe.

It’s comparatively rare to see this kind of overt racism in public places anymore, so it can be easy to think that racism is a problem that is now confined to the fringes of society. It isn’t gone, though; it’s just something we reserve for our living rooms and kitchen tables.

For a long time, much of the Internet has been as private as your basement entertainment center, and discussion there had the intimacy of comments made over a game of pool with your friends. With the mainstreaming of the Internet, more and more of those hidden spaces are becoming increasingly public. They are becoming cavernous pool halls, not intimate basements.

It was a year of doing good.

One of the first stories we broke that got picked up by the MSN was the story about r/random_acts_of_pizza, a subreddit where users come together to send pizzas to down-on-their-luck fellow redditors.

When he got slapped with an absurd lawsuit, Matthew Inman, creator of webcomic The Oatmeal, started a campaign to raise money for charity. He wanted to raise the $20,000 he was being sued for, take a picture of it, and then send it off to the charities, showing his accusers they’d never get a cent. Well, he raised 10 times his goal.

One of my personal favorite Internet moments of the year came courtesy of Ze Frank’s Kickstarter to restart his show, The Show. As a joke he included “walking a mile in your shoes” as a reward. Somebody took him up on it. The result was a YouTube video that is simple, poignant, and will restore your faith in the Internet—should it ever need restoring.

Most recently, when bus monitor Karen Klein, 68, was tormented by children to the point of tears, the Internet rallied around her, raising more than $700,000 for her. In response to the outpouring of support, she’s started a charity to oppose bullying.

It was also the year that Internet culture went, well, not mainstream but much, much bigger. We declared the reaction GIF the new emoticon. Being a meme became a (sort of) legitimate career path. Image macros became popularized to the degree that college students could ruin them on Facebook. Everyone in the world, it seems, became aware of Tumblr activism through the Occupy movement and scratched their head about what the hell a hacktivist might be. (Unless you were in the CIA or a drug cartel, then you knew.)

Obviously, GIFs, memes, and macros all existed before this year, but their popularity exploded, bringing them to a much larger audience this year, due to the broad popularization of Tumblr and Reddit.

The Internet is a rapidly expanding universe, and it has been for the last two decades. In some sense, every year the Internet goes more mainstream. I just finished Kevin Kelly’s book, Out of Control, published in 1995. In it, he talks about participating in the Internet with 17 million others. 17 million. That’s a ton of people, almost as many as live the greater New York area. And yet, it’s nothing next to the more than two billion people that are now online.

A couple months ago, I almost passed out when I got an email forwarded from my mother (yes, she still sends them to me sometimes) that was… Lolcats. In a way, I feel like that’s a good barometer of where the Internet is in the broader cultural consciousness.

It’s a big Internet out there, and it’s only getting bigger. But as it grows, it morphs and changes. Each year, it infiltrates and takes over mainstream culture in new, unexpected ways, and it changes itself, developing new characteristics and losing old ones.