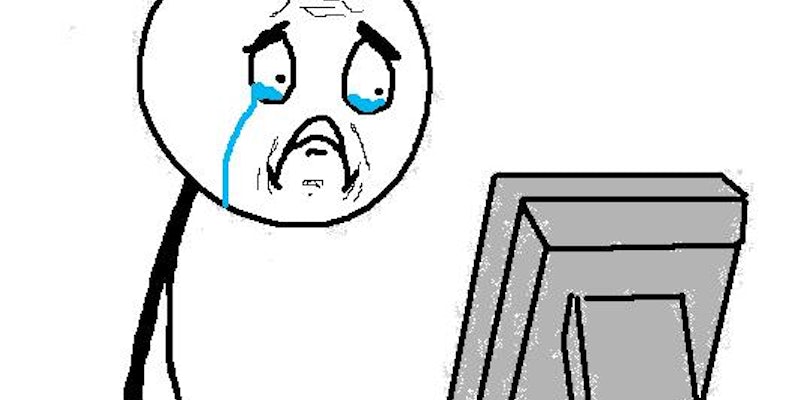 You don’t need Google glasses to live your life through a computer screen.

Moutot was describing what inspired her to create Webcam Tears, a Tumblr art project inspired by the photographs of Laurel Nakadate.

“I just loved the simplicity of Laurel Nakadate’s work, the reality of it, the reality of being [a] desperate and sad girl in 2011. Somehow I felt very close to her. I thought that it was very clever of her, to believe that her self-absorbed sadness could interest other people. People are curious and creepy. Which made me think, that with the actual Internet climate, the idea could spread and that it would be interesting to make a collaborative project and to ‘collect sadness.’”

The Tumblr is pretty much exactly what it sounds like: videos of people crying in front of their webcams. And doesn’t that just pretty much sum up the entire Internet?

As a young’un, I was always annoyed by all the people taking pictures at events–school plays, sporting events, art shows. Everyone had a camera out.

I wondered, “do they ever actually look at those pictures?”

Somewhere, there are millions of shoeboxes full of un-looked-upon photographs, yellowing into oblivion. But if no one ever bothers to look at these photographs, then why take them all?

The only answer can be, “for the experience of taking them.” By the late ’90s we’d reached the point where reality seemed better to us in a frame.

The framing of life was a process that began in the mid-19th century with the advent of photography. With the Internet, it seems, we have entered a new era in human evolution: the frame has spun around. It is no longer reality we wish to frame; it is ourselves.

But is all this mediation a good thing? Moutot says it’s certainly a challenge. You break up over email. You argue with a lover over Facebook chat. And it isn’t just teens.

One of the most beloved online couples, the hosts of Apartment Therapy—Ozzie and Harriet in 265 square feet—is breaking up.
But the consolation, I suppose, is that while the two hosts of the blog don’t have each other anymore, at least they have their fans. Even the likes of former President George W. Bush have discovered the power of Facebook to build a close relationship with millions.

Agent Smith, in The Matrix, explains to Neo that the first matrix was perfect, a utopia. No pain, no death. No hunger, strife, or injustice. Humans, he says, rejected it.

The Matrix apparently got it right. As we reify ourselves online, we are apparently driven to include everything, not just the good stuff. Moutot said:

“Social networks push us to ‘share’ everything. This idea of ‘sharing’ is not harmless. This new generation has a very different relationship to privacy. Crying in front of a webcam is just the logical extension of what’s happening on the Web today (which is also an extension of the reality television).”

Now, even sadness is mediated by the Internet.

But there’s still one experience that can’t be resolved online—and it’s certainly not for lack of trying, mind you. And that experience is sex.

These kids today. Our parents couldn’t watch the school play without taping it. The kids now apparently can’t hit puberty without putting it on the Internet.

And the stakes are damn high. A teen may find himself living as a registered sex offender for the rest of his (or her, presumably, though you never hear about that) life because of one ill-conceived video with a fellow consenting minor. Is it any wonder that we’re all deeply concerned about our privacy, and seriously suspicious of any government or corporate intervention?

But for the same reason, it’s not a surprise that the government isn’t exactly giving up on intervening either, even if it’s moderated its tune.
It’s funny. In science fiction, depictions of man living intertwined with machine—the Borg, for instance—the government is always all consuming and the people are, well, machines. But the more we live our lives in the medium of the Internet, that’s not how it’s shaping up at all.

Technology is becoming an extension of the most human parts of us—our emotions. And our laws? They are powerless against our irresistible desire to recreate ourselves and our experiences across what is increasingly the only medium that matters.

Editor’s Note: Editor in Chief Nicholas White is filling in for Owen Thomas, who is off this week.