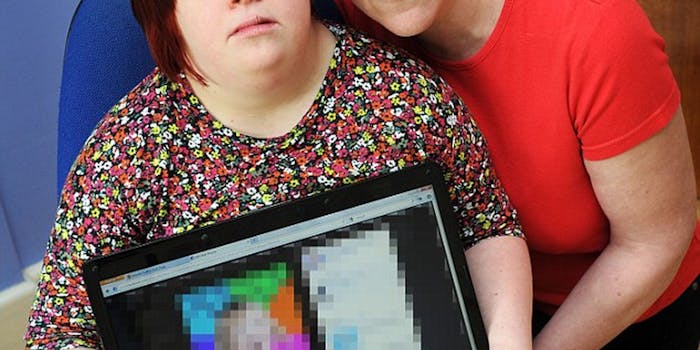 Dot Dot Dot: In search of justice on the Web

Despite trolls and all else on the Internet, justice can be had—if you’re willing to fight for it.

Three years ago, someone grabbed a picture of a 13-year-old girl with Down syndrome and turned it into an nasty little meme: “I can count to potato.” Now the girl’s mother has taken to the Internet to stop the meme by expressing her anger and showing us the effect it’s had on her and her daughter.

Of course, this mother’s eminently understandable—and frankly right—crusade amounts to, on the Internet, feeding the trolls. And so the same young girl has been appropriated again for a new meme, parodying her and her mother’s hurt and justified anger.

“I realize this is the internet, and anonymity is a sure fire way to say whatever the hell you want, but most of you would not say this sort of thing in real life. You might not care for the kid, but you would not purposely make the kid feel bad…. Maybe we should start taking what we say on the internet a little more seriously?”

I can only hope the rest of us turn out to be worthy of that comment.

Consider the case of Fox News contributor Monica Crowley. She made a nonsensical joke on Twitter implying that a birth control advocate must be a lesbian. (Someone should explain to her how being a lesbian works.) But Twitter users were having none of it. The backlash was swift and thorough. “Just to clarify: When @MonicaCrowley joked that a straight woman who got engaged is gay, she was demonstrating how unfunny everyone else is,” tweeted Simon Maloy.

Or consider Iowa teen Matt Shankles. After being bullied himself every single day, he’s decided to fight back—not by violence, but by reaching out to other victims. He’s taken to Twitter to offer support to other kids being bullied, tweeting things like, “Keep your chin up, You’re too important to be ashamed.” That kid just became my hero.

The Internet is also where we turn for justice when all else fails.

When Stuart Chaifetz suspected his autistic son was being mistreated at school, he sent his son to school with a wire. He heard his son’s teacher and aide insulting him and making fun of him with the rest of the class. Chaifetz went to the school for justice but got none. So he turned to YouTube. He’s not going to file a lawsuit, he said. “It’s not about money. It’s about dignity. This is to reclaim my son’s dignity,” he said. After that, the aide was fired, but the teacher—well, they’re still working on that one. But now, everyone’s watching.

At times, the Internet is a court of last resort, providing resolution when everything else has failed. But at other times…

Alex Boston was attacked online when some schoolmates set up a Facebook page to portray her as a promiscuous, racist drug addict. Her family lodged complaints with the authorities and with Facebook, but nothing happened. Finally, they resorted to a libel suit, and just this week, a year later, the page has been removed. The family is also supporting new legislation to provide legal tools to deal with these events much more quickly.

It often seems like the Internet is actually the last place to find justice. It can be had, but only if you’re willing to fight for it.

Chris Loesch, husband of a conservative pundit, cannot keep his Twitter account up. Liberals who’ve taken a dislike to the man keep reporting his account as spam. Twitter’s algorithm keeps automatically blocking him, and then he has to appeal to the Twitter gods to get his account back.

I make my living by the First Amendment, so I take it pretty seriously. What’s happening to Loesch is mob censorship, and there’s every bit as much reason to be concerned about that as government censorship, especially in a democracy. One of the pieces of the American system that is truly genius, the thing that we should fight till our dying breath to keep is the respect of the minority. Majorities aren’t always right or just, and they’ve done an awful lot of terrible things throughout history.

What is extraordinary about the Internet is its ability to empower and enfeeble the little guy.

But we’re still in the formative years of the Internet. Legislators are at the gates. Even those of us inside are still working on how we want this crazy place to emerge. Right now, it’s still a toss up. Will the Internet leave room for minorities? Will it respect and celebrate the multiplicity of voices that compose it? Or will it congeal into a monolithic force—a mob?

It’s up to us decide, before someone else decides for us.