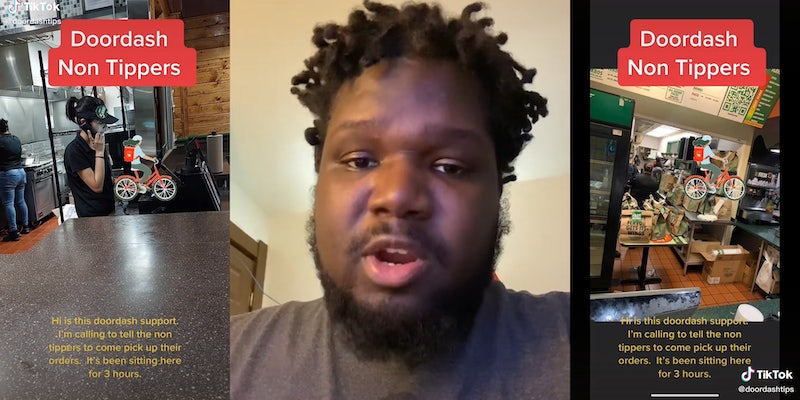 'Non-tippers didn't set the chain reaction off, DoorDash did by not paying y'all.'

While many DoorDashers have gone viral for proclaiming “no tip to trip,” another user has recently achieved similar virality after explaining the chain reaction that this mentality paired with zero tips creates.

In a TikTok with over 695,000 views, user Kenshi (@itsjustkenshi) begins the video by stitching with another TikTok that shows a worker calling non-tippers to come and pick up their orders. This video claims that the untipped orders had been sitting for over three hours.

“Non-tippers don’t realize the chain reaction that they set off,” Kenshi says.

His argument, in summary, is that when restaurants receive and make untipped orders, they frequently have to throw away and remake food. This is due to the fact that drivers often reject untipped orders. As Kenshi explains, “nobody is about to drive across town for $3.50.”

Kenshi claims restaurants are becoming aware of this. As a result, some stores are opting to prepare untipped orders when the Dasher arrives to pick them up, saving them from making and remaking the order.

But this causes another issue, he says. If a Dasher gets to a location and sees that the order is not ready, they will cancel the order simply to save time. This causes the cycle of cancellation to continue.

“So if you’re not going to tip, order very close to your house,” Kenshi advises.

In comments, users argued that Kenshi’s ire was misdirected and that Dashers should instead be upset with DoorDash for not paying its workers more.

“Non tippers didn’t set the chain reaction off, DoorDash did by not paying y’all,” one user wrote.

“Ngl doordash drivers should complain to doordash more than us,” another stated.

Several users also claimed that it shouldn’t be the role of the customer to pay the workers’ wages.

“I tip every time but it’s not fair that customers are expected to pay the company AND their employees just so they can save money,” another added.

“Bro it’s not my responsibility to pay YOU,” a further user noted. “i’m the consumer, not the employer.”

Others stated that issues like these put them off from using the service entirely.

“That’s why I don’t use DoorDash,” a TikToker explained. “I’m not gonna argue about a tip.”

The Daily Dot reached out to Kenshi via TikTok comment and DoorDash via email.