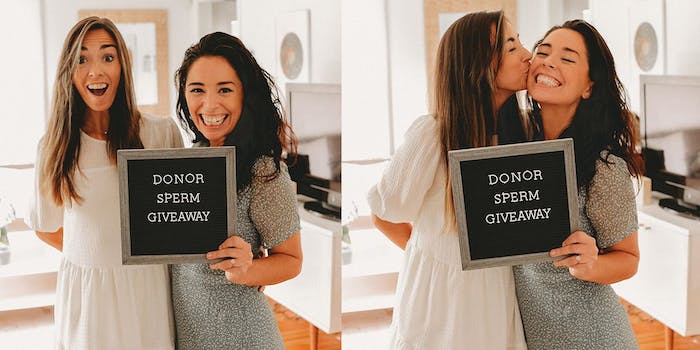 The winner of the Insta giveaway gets a vial of sperm.

A popular lesbian couple is going viral for launching a “donor sperm giveaway” on Instagram.

Allie Conway and Sam Kwiatkowski announced the giveaway on their joint Instagram, where they boast over 200,000 followers.

The couple said they partnered with Fairfax Cryobank to help one of their followers “grow (their) family” by offering the winner “credit” for a vial of sperm at the sperm bank. The winner gets to choose the donor.

The post garnered thousands of mostly positive comments. “Imagine telling a child that they came from an Instagram giveaway,” one commenter wrote, before clarifying they were not being hateful toward the couple.

“This is one of the funniest things I’ve seen social media used for ever, in my entire life, and I feel like no one’s appreciating the pure divine comedy that is an INSTAGRAM GIVEAWAY RESULTING IN NEW HUMAN LIFE,” one user tweeted.

Many, however, defended them, reminding jokesters about how expensive in vitro fertilization is. “Sperm is expensive. And you don’t get to judge how people start a family,” one user said.